The classic shooter Metal Slug 2 by SNK Playmore is now available for mobile devices with a few added features so you can relive the awesome action that made it popular in the arcades back in 1998. 4 characters to choose from, lots of weapons to shoot, war machines to ride on and hundreds of enemies to take on.

Metal Slug 2 is a classic shooter game from the Arcade System Neo-Geo, where you take control of one of 4 soldiers and try to stop an evil terrorist army from taking over the world. To do so, you’re armed with a handgun that has infinite ammo and can collect lots of cool weapons and even ride on powerful vehicles like a camel equipped with miniguns. 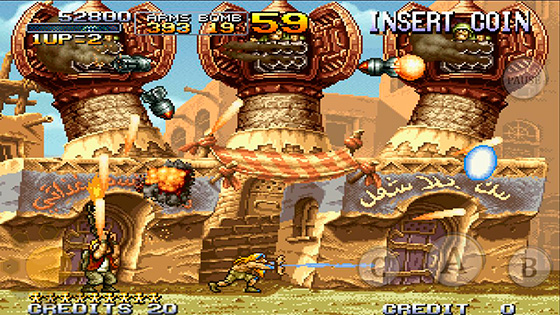 There’s a virtual joystick in the bottom of the screen, and you can configure it for wide display, or have vertical display with the game’s original resolution, and have the buttons appear below of the action over a black background. You move around and aim with the joystick on the left, shoot with A, jump with B, and throw granades with C. If you’re riding a vehicle, with C you shoot cannons or missiles depending on the machine you’re on. The objective of the game is just to go right shooting at all enemies and avoid getting shot, sometimes the screen will be locked and you’ll face a mid-level boss or have to defeat a number of enemy soldiers before being able to move on, until you reach the level boss. Defeat it, and you’ll get the Mission Complete. While you start with a pistol with the male soldiers, or a revolver with the female characters, you can get special weapons such as a shotgun, laser, rocket launcher, or the Heavy MachineGun, that can shoot diagonally. Besides new guns and ammo, you can collect different items for score, and rescue prisoners of war, who give you a gifts in return, or join you in your fight by fighting alongside you until you lose a life.

Metal Slug 2 features great pixel art and animation, that still holds up today after 18 years of its original release on Neo-Geo. The characters move around smoothly and have lots of actions, expressions and do random stuff when you’re not playing, like talking to a radio, drinking water or even sleep while standing up, and the enemy soldiers also have unique funny animations. 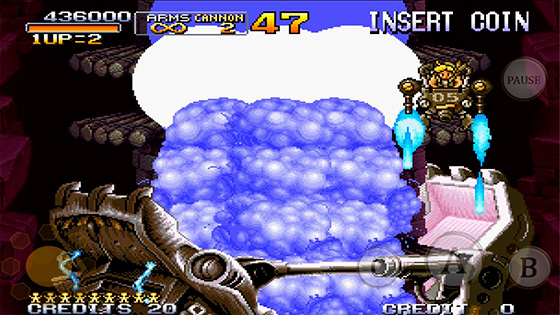 The backgrounds look pretty detailed and colorful, and there’s a lot of variety. Besides normal enemy soldiers with a green uniform, you’ll be fighting against mommies, bats, zombies, robots, aliens and many different types of military vehicles The bosses are huge war artifacts that take a large part of the screen, and they have many different sections moving around to give the impression of a life-like machine. While the graphics may look a bit too “blocky” for today’s players expecting HD visuals, the animation and visual design of the Metal Slug series is excellent and makes up for the low resolution.

While Metal Slug 2 was a perfect Arcade experience back in its day, this mobile version doesn’t really add much to the original title, so once you finish it there’s not much to do, and it’s a pretty short game. 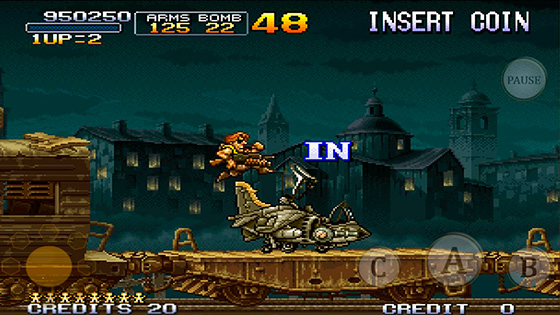 Besides Arcade Mode, there’s Mission Select, and you can compare your highscore with players all over the world in the leader boards. It even features a two-player mode and achievements, but most players will just beat the main adventure and then move on, so it lacks replay value.

Metal Slug 2 is available on Google Play and the Apple App Store for $2.99, which is a good game considering you spend more than that in quarters if you try to finish it at the arcades. Fans of the series and retro players that like this kind of experiences, should definetely get it, but more casual gamers may think twice before buying it, since it’s a game that can be finished in less than an hour.

Metal Slug 2 was really popular at the arcades back in the late 90’s, and now you can have it on your mobile device. For 3 dollars, it’s a reasonable price, and totally recommended for those that enjoyed it on Neo-Geo and want to play it on the go, but more casuals players that are not into Run ‘n Guns, maybe should try Metal Slug Attack, that goes for a different more use-friendly approach, and it’s free. Pros Cons