Test your reflexes to the max! Avoid the yellow cars for as long as you can, and if you switch lanes at the very last seconds you get double points. Whatever you do… Do not crash.

Do Not Crash is a simple to play game that gets very hard pretty quick. You take control of a little red car that is advancing on a 2 lane track with other 3 yellow cars going in the opposite direction. Your objective is to tap on the screen to switch lanes and survive as long as possible. 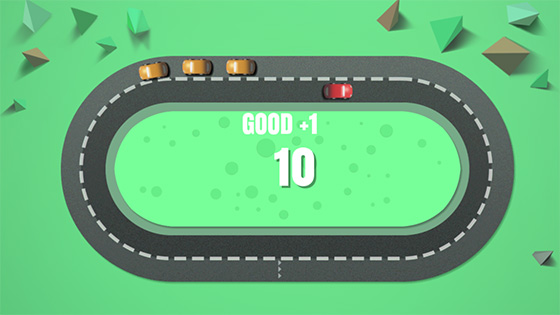 You always pass next to the cars in the center of the track, and you get 1 point if you do not crash. If you’re going in the same lane as the yellow car in front, and you avoid it at the last second, you get a “Good +1” to boost your score. When you lose, you must start over. The scenery will change and over your red car a sign with your current record will appear. It’s all about trying to get a higher score each time, and that’s it. About 10 laps, the yellow cars will get separated and then you must avoid them by switching lanes 2 or 3 times in the center of the track. There are no power ups or anything to help you survive longer, just your reflexes.

Do Not Crash features elements that appear to be 3D models, but represented in 2D images, similar to the pre-rendered graphics that became popular in the mid-90’s in Super Nintendo. The cars just move around but you won’t see any animation frames, just their image following the lanes, and a little explosion when they crash. 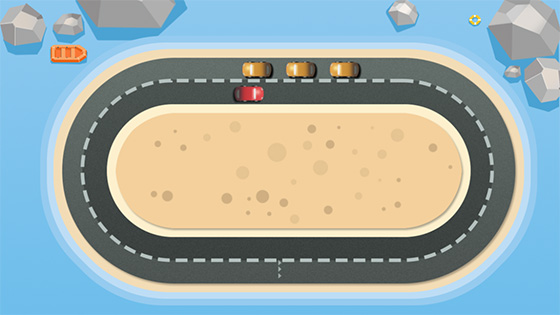 The track and backgrounds look simple, with a few polygonal objects like rocks and a boat in the beach level and that’s it. Everytime you lose the background changes, but there are only 5, and the game plays exactly the same. Given the simple casual gameplay, the visual style works out just fine, but it’s nothing really noteworthy.

Do Not Crash is great as a casual game to spend a few minutes trying to improve your record, but it doesn’t offer much else that the basic one-tap quick reflexes based gameplay. 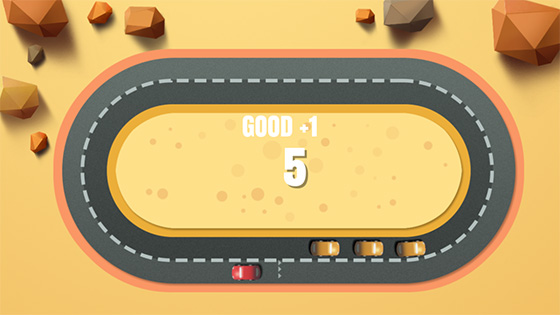 It would’ve been nice to be able to choose your car color or maybe more vehicles on the road. Similar games let you collect items or coins in the road and offer achievements and stuff. Also, this game doesn’t have music, just the same sound effect forwhen you switch lanes. At least there are several scenarios, but the track itself doesn’t change. Overall, Do Not Crash is an OK Arcade experience, and you may keep trying for a while until you reach a 20 points score, which isn’t easy at all; but just beating your own record in the same track, won’t have you playing for long.

Value for your Money 84%

Do Not Crash is free on Google Play and the Apple App Store. You’ll see some banner advertising after you lose about 5 times or so, and since the game is quite challenging, you could be seeing an ad every minute, and that may be too often. But if you’re good, it’s not really annoying, and it’s to be expected from a game like this.

Do Not Crash is a good option if you just want something simple, but challenging. The one-tap gameplay is meant for casual players, but the way it tests your reflexes could be considered for “Hardcore” Gamers. It’s a simple app, and besides the core switching lanes dynamic it doesn’t offer anything for replay value, but it’s OK to pass a couple of minutes. If you want something deeper, you can try racing or hopping games. Pros Cons