Touchdown Hero by CherryPick Games is a fun arcade style top-view runner that will test your reflexes to the max trying to get the most touchdowns possible. If features Pixel Art, nice chiptune music and addictive touch-screen gameplay.

Touchdown Hero is a Top-View Football game where the objective is to get a Touchdown on each field you play in. You control the player by touching and dragging your finger across the screen, he will always follow your motions, and you have to be quick to avoid all the defense players from the other team that will do everything they can to stop you. 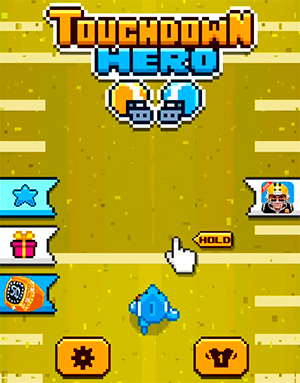 When you release your finger from the screen, the field will become dark, and you’ll see the gameplay in slow motion, this is really useful to plan your strategy to avoid the members of the other team. But it doesn’t last forever, there’s an energy bar that starts to be depleted in “Slow Time”, so you have to keep the play flowing by pressing down the screen again. Everytime you reach the end of the field, you immediately enter another one, so you’re continuously going for the next touchdown. The overall goal of the game is to score as much touchdowns as possible, which gets harder and harder the more you advance.

The game features blocky 8-Bit Pixel Art, it is colorful and you won’t have any trouble distinguishing the different elements on the screen, but it does look a way too low-res sometimes, even for a game of this type. There is a huge defense player that looks too much like just a regular rival sprite, but displayed bigger, and it may look a little too ‘square-ish’ 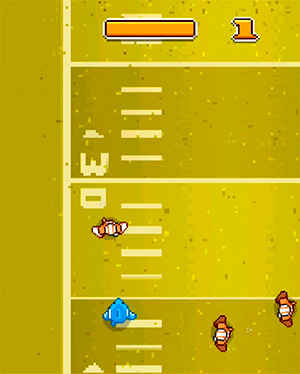 Still, the visual style of the title is nothing to really complain about, since you’ll be focused on just dodging everything that comes at you. It should be said that there are many costumes for your player and that the field changes according to the weather. It can be a sunny day, it could be cloudy, it can be raining, and even raining. The players are not affected by the field conditions and move at the same speed, but it’s still a nice detail to have for some variety in scenery.

While Touchdown Hero is a simple pick-up-and-play game, endless arcade style runner, it does have some extras that keep the action fresh for some play throughs. The field changes quite a lot, from a spring green look, to an autumn yellow, to snowy white, a gray concrete look, and there’s a very run down field that looks as if it had about 10 games in a row. 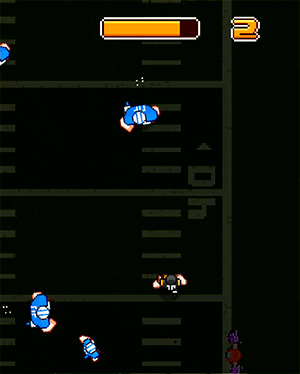 Also, you have many different costumes for your player. You can select uniforms based on real NFL teams, and there are also some funny looking ones like the Shark, Superman, the Road Warrior, and you can even unlock a team of 5 players. The extras to unlock give you a reason to play a few more times, since it adds a little replay value seeing the new animations with each character.

Touchdown Hero is free to download in Google Play and the App Store. There’s always a banner advertising in the bottom of the screen, and when you lose, you can choose to watch a video ad, or give up and go to the Title Screen, in which case you’ll see a full screen banner ad. It is kinda intrusive, specially since most plays don’t last very long, so you’ll see about 3 banners in less than a minute, but still, the game is pretty addictive and you’ll put up with it for another try.

Touchdown Hero is a simple arcade game based on football that can get pretty addictive. It will test your reflexes to the max and it gets pretty challenging even before reaching the 5th field. Try it out for a while if you’re looking for a fun “drag your finger across the screen” gameplay experience. Pros Cons