Tricky Bounce by Ablue2K is a pretty challenging endless Arcade Jumper that will test your reflexes to the MAX. Earn points by avoiding mines, bombs and spikes for just a little bit to get “Near Miss” and collect all the green diamonds.

Tricky Bounce is an Infinite Jumper where the objective is to get the highest score possible. You take control of a round creature that’s jumping automatically in a hallway full of mines, bombs, spikes on the floor and ceiling and other dangers. The only interaction you have with the character, is tapping on the screen so it falls down immediately, and you can do it at anytime, it could be just starting a jump or at the highest point. 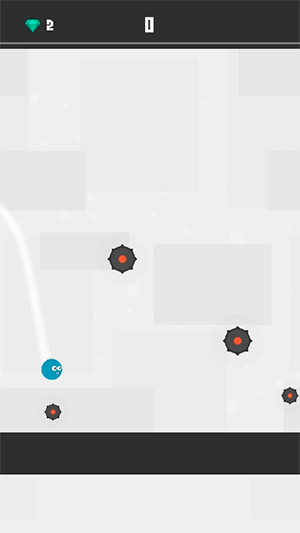 You get points by doing a “Near Miss”, 1 point for avoiding the mines for just a little bit, there are green lines you can break for 1 point, and scattered around the level you find green diamonds, that give you 2 points. You don’t get points by distance, so just surviving a long time won’t do, you need to play dangerously, and that’s the fun of the game. Sounds easy, but it’s really quite hard just to get 5 points. Since the screen is vertically oriented, when an obstacle enters your view, you have very little time to react, so you need sharp reflexes just to dodge mines and spikes, and even more so if you want toget a high score.

The design in Tricky Bounce is kind of simple, but gets the job done. The background is not just a white layer, you see squares and other figures in different shades of light gray moving around, which is at least better to look at than blank colors like in Bouncy Ball. 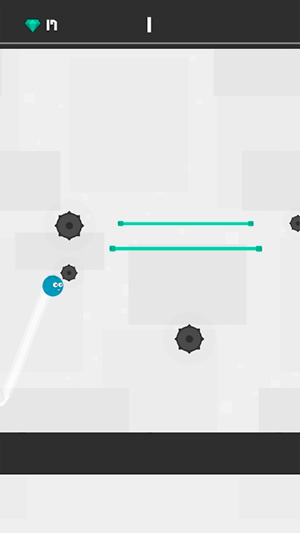 Mines are rotating, and sometimes the green lines are also spinning around between a big mine and a smaller one doing a translation motion around it, like a satellite. Spikes are red in color so you can see them easily, and interactive elements such as elevators also have a distinctive look so you can notice them quickly. About the characters, you start out with a weird blue blob that has a face, but you can unlock many more characters such as a cow, a pig and a zombie. While Tricky Bounce is not really eye catchy, the visual design looks better than the average 2D infinite jumper that often goes for a minimalistic approach.

As far as free Endless Arcade sidescrollers go, Tricky Bounce is out there with the good ones. Levels change at random, so not every play is exactly the same, but you will find some obstacles until you reach a certain distance. At first only mines, then spikes start showing up, and then the moving bombs. It’s a very hard game, but not really frustrating, you’ll find yourself trying again and again since the gameplay formula and random generated level gets pretty addictive. 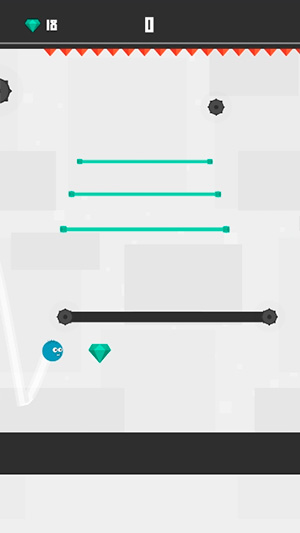 The music is worth mentioning, it’s a catchy chiptune that never seems to get old, and also the sound effects make for a nice experience for your ears. It would’ve been fun to hear some voices from the character when it dies, like other games do, but nothing to complain about. Tricky Bounce also features Global Ranking, so you can compare your performance with players in the world. So you can see if the game is really that impossible, or you are not such a good player…

Tricky Bounce is free to download in both Google Play and the App Store. In-game you can get an Ad Free version, so if you really enjoy the game, you can consider supporting the developer, but ads don’t show that often even if you lose every 5 seconds, so most player may only play for a few minutes and then move to something else.

A perfect port of the classic cartoony shooter, Metal Slug 1 appeals both retro gamers and new fans of the genre alike. Great graphics and gameplay make for a experience worth having even 20 years after the original Arcade came out. Pros Cons