King of Thieves by ZeptoLab is a nice platformer where you avoid monsters and sharp obstacles to get to each stage treasure. There are over a hundred leves to play, and you can create your own or try to get the loot of other players levels.

King of Thieves is essentially a platformer where the objective of each level is to jump around, avoid enemies and circular saws, bounce on pillows, slide on walls and get the tiny thief to the treasure. 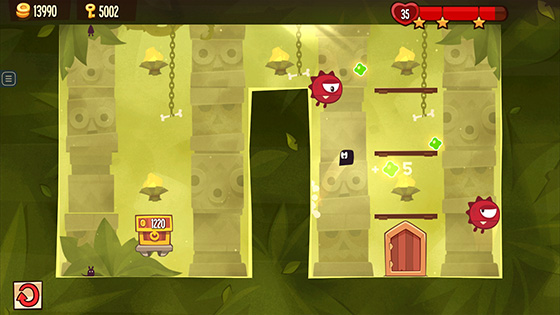 The thief walks automatically, and you only tap on the screen to jump. When he bumps into the wall, he’ll stay there pressing against it, when you jump, he’ll slide on it until you press jump again, and then he’ll turn around and began going the other way. Enemies can be giant red monsters patrolling that follow a certain path, bats that follow you around or circular saws that stay in the same place and you have to avoid. In each level there are green gems floating in certain places that you can collect, ana there are interactive elements in the background such as chains with a bone at the end, that when you touch them, they can trigger effects such as having an enemy turn transparent so you won’t get hurt by it. You can’t die, instead your life bar determines how many Stars you get at the end with your Rank. In the World Map, you can select which level to play. At the start you have 3 to choose from, and as you beat levels you start unlocking more, so you don’t need to get the trasure in Stage 5 to be able to play Stage 8, you can choose up to three more levels if you find one to be too hard, and it does get quite challenging pretty quickly, is all about timing and reflexes.

King of Thieves features great 2D hand-drawn art. The animation looks pretty good, and even if the thief is just a black shape with eyes, you can see it squeezing when pressing on walls, spinning and turning around when jumping, and it has 2 or 3 different animations for the same move, so it looks very well done. 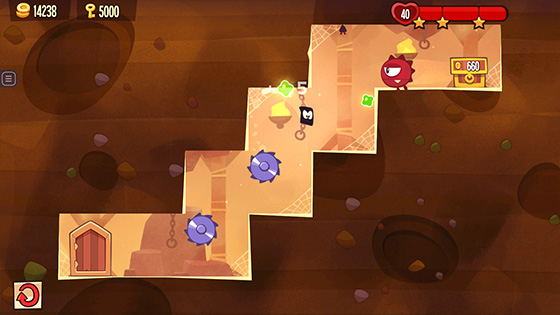 The backgrounds are pretty detailed and each one has a different layout. Every set of levels you enter a new world so the stages have a new setting. You start in the desert looking for treasure in caves and buried ruins, where everything looks brown and yelowwish, and then go to temples hidden in the jungle and the overall look is green and full of vegetation. There are some nice effects, like how the thief leaves a white tail of fading light as he moves, and when collecting gems and coins you see a fading effect of them going to the counter in the corner of the screen. Overall this is one of the best looking 2D platformers available now.

King of Thieves offers over a hundred levels in the individual mode, but the great part of the game is that players can design their own stages and challenge other players to steal their loot. 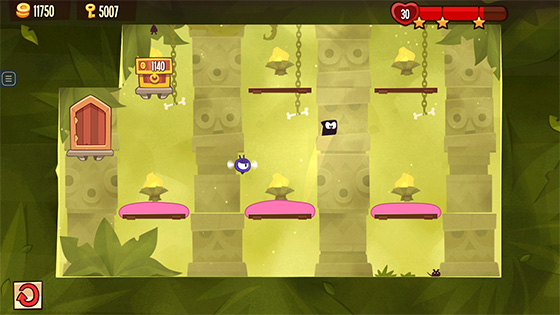 The game starts easily, but as soon as you get used to the gameplay, the real challenge starts and you won’t get 3 Stars Ranking the first try by the time you get to the 2nd World, and given that you can create your own levels, the potencial for an infinite number of levels to play is there. It’s also worth mentioning that you can customize your outfit, so you’re not stuck with being a shadow with big eyes.

King of Thieves is free on Google Play and the Apple App Store, but you will see banner advertising way too often. Since you don’t really die when playing the levels, the first time you get hurt, you’ll see an ad, and then resume the level. Many games work like that, but given this game style, the ad really interrupts the flow of the gameplay, and that can get pretty annoying.

King of Thieves is a good option if you’re looking for a simple to play yet challenging platformer. There are 112 individual levels you can try out, or you can create your own. Once you get into other players created levels, you’ll see that there’s potencial for thousand of stages for you to get into and collect the treasure. It’s fun just going in for the loot in the Single Player Mode, so if you only want a great quality one-tap platformer, check it out. Pros Cons