Ultimate Briefcase by Nitrome is an Arcade adventure with extremely addictive gameplay that will have you dodging bombs and collecting power ups in order to survive an Alien Invasion.

Ultimate Briefcase is a sidescrolling game where you control an office guy that suddenly gets trapped on a segment of the street, and aliens above him are dropping bombs. The objective of the game is to survive the longest time possible, to do so, you run by touching the right or left side of the screen, and when powered up, you can make use of the Ultimate Briefcase and lift it above your head to use as a shield, and protect yourself from bombs for about 8 seconds. 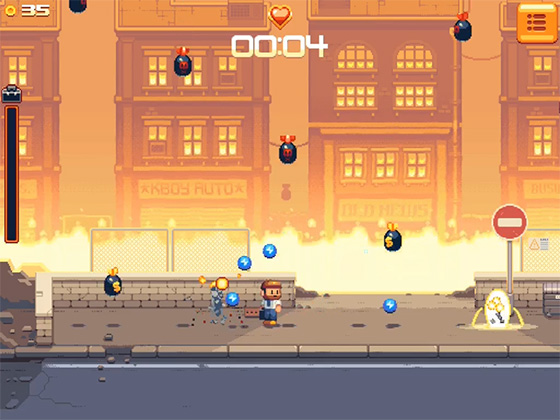 To Power Up your Briefcase, you must collect Energy Spheres dropped by an electric bomb, which will energize it a little bit. There’s also a battery that falls down on the street every once in a while, and that one will power up the briefcase about 30%. Another type of bomb is the ‘Smart Bomb’ that when collected makes every bomb on screen explode in the air, and finally there’s the ‘napalm’ that leaves a burning flame where it lands, so you can’t cross that place. You have other helpful items falling down, like the ‘Rain Cloud’ which brings a rain to put down the napalm fires, and the ‘Shield’, which brings a platform hovering in the air that will protect you from falling bombs, but every time it gets hit, it takes damage and won’t last forever. It works in a similar way of the barriers in the classic 70’s Arcade ‘Space Invaders’. Finally, there’s the Golden Bomb leaves coins when it hits the ground. You can use them to buy items, hearts to continue playing when you lose, level up the briefcase, and unlock new characters.

As expected from Nitrome, Ultimate Briefcase features beautiful pixel art with nice animation. The backgrounds are pretty detailed and everything is moving around. There are some lighting effects like in the Aliens Ships lasers, napalm bombs and when the smart bomb activates. Also, there are camera shaking effects when bombs explode, and the effect is exaggerated with the huge bomb or many exploding at the same time, be it by falling down aligned or by collecting the smart bomb. 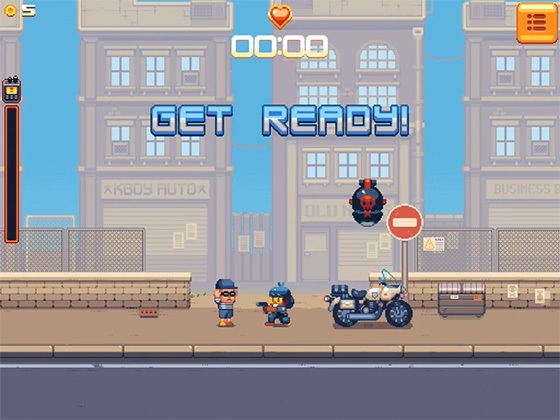 The story is told by animated cut scenes with funny stuff happening, and everything from the menus to the scenery is really taken care of. As a bonus, in the level you can find a VHS tape that explains a little bit of the story. In the Menu there’s a Bonus section where you can watch the tapes, and they show animated sequences of what happened before the game’s story featuring many characters in cartoon gag style situations. Even if the game scenery changes quite a lot. At the start, it’s a sunny day, with the background looking bright and colorful. Once the alien invasion begins, the background turns into a raging inferno, with a fire going on in all buildings of the neighborhood. When you collect the Rain Cloud, the scene looks dark and cloudy and the rain drops look great, but not distracting and it really ads to the overall experience of the game.

Ultimate Briefcase is features 3 levels where the objective is to last as long as possible, there are no extra challenges, achivements or anything else gameplay wise, it wouldn’t have hurt to have bonus missions like “Collect 30 coins” or “Use the Briefcase Twice” to add a little more variety… Still, it’s a very addictive game and should keep you quite busy just trying to survive for 90 seconds. 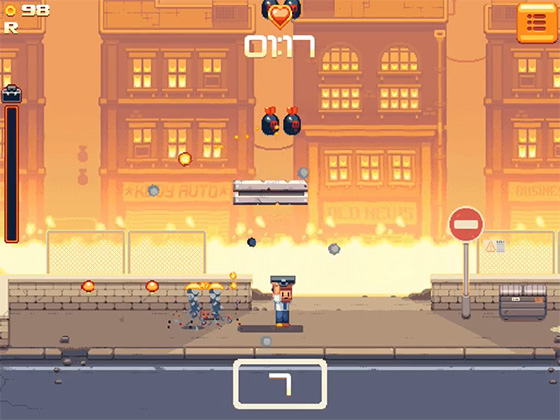 There’s also just one song through the whole level, and even if you can unlock more characters, each one with unique power ups and cutscenes, it would’ve been nice to get a different setting, music and maybe some other items.

The game is free to download and shows advertising each time you lose. When you die, you can choose to watch a video ad to win an extra heart and continue, or can start over, in which case you’ll see an image advertising another game. There’s an Ad Free version at $3.99, which is pretty expensive considering there are many more games like this for just a dollar or two on  Google Play and the App Store. You can also buy coins through in-app transactions to unlock characters and buy in-game items, $1.99 for 500 coins, if you choose to go the ‘just playing’ way, it’ll take quite a while to see everything Ultimate Briefcase has to offer.

Ultimate Briefcase offers an Arcade experience similar to 80’s classic where gamers used to pour quarters trying to beat the highest score. The gameplay is really simple yet extremely addictive, and you should try it out now, it’s free, and may get you hook for hours without you even noticing. Pros Cons