Take part in annual Timber Tennis World Championship – beat all the rivals (including Princess, Hipster, Boxer and many more). Upgrade your skills, use super-shots, watch out for specials! Unlock all characters, balls and finally compete in local multiplayer with your friends!

Timber Tennis is a simple arcade style title based on the classic Pong, where your objective is to return the ball to your opponents court everytime, and survive long enough to make an unreturnable “Super Shot”, change court, and make your rival miss one more time in order to move up in the Timber Tennis World Championship. 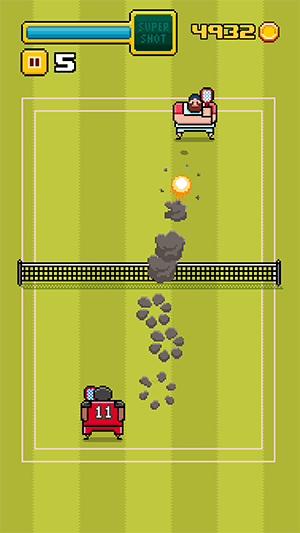 The only thing you have to do, is to tap the right or left side of the screen to make your player move to the sides of the court one step at a time. If you’re in place to return the ball when it comes, you’ll hit it back. If not, you’ll lose and will have to start over. After a few hits, you’ll be able to make a “Super Shot”, and you’ll see a little dotted line appear to aim where you’ll place it, here you’ll have to hit the ball away from your opponent in order to win the point. Just don’t aim the ball outside of the court to the sides, because then it’ll be an “out” and you’ll lose. As you defeat opponents, they will get tougher to beat, performing harder hits, and the ball will travel faster, so you’ll have to react quickly in order to win. Also, some rivals will throw bombs at you, or even 2 balls in the same point, and you’ll have to return both to keep playing. From time to time, Golden Coins appear in the court, and you have to move to get them, while being careful not to miss the next ball hit. You also get 5 golden coins each time you defeat an opponent. You can use the game’s currency to continue playing after you lose, buy new characters, balls, or play in the store slot machine, where you can get many prizes depending on your luck.

Timber Tennis features a 2D crisp and colorful 8-Bit visual style in order to look “Retro”. All characters look pretty much the same, big and bulky (except for the Princess) but have enough details so you know which pop culture icon they’re supposed to be. 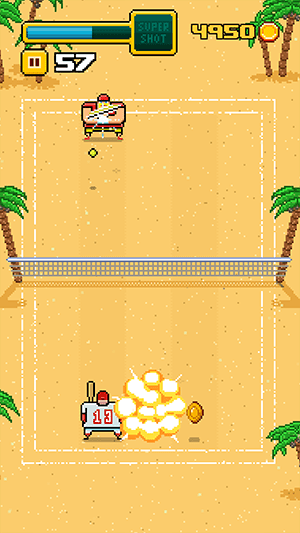 The animation of each characters is also pretty much the same, what changes is the Super Shot, since it’s unique to every player. For example, the Wrestler who seems to be based on “Thunderlips” from Rocky III, hits the ball like a bolt of lighting; Timberman engulf it in fire, Robocop makes a blue laser appear, and so on. The places where you play look very nice considering the low resolution, and there are many of them, so you’ll have a lot of variety in stages. You can play on the typical courts you see at  the Grand Slams: Grass, Laykold and Clay. But you can also play on sand at the beach, on wooden docks, in an urban setting concrete court, in outer space, and many crazy places.

Timber Tennis has many unique characters and balls to unlock, and about a dozen courts to play on. Best, of all, you won’t have to collect coins in order to buy everything, since there are a lot of players you can get by beating them in the tournaments, and you can also get some balls by reaching a certain ranking. 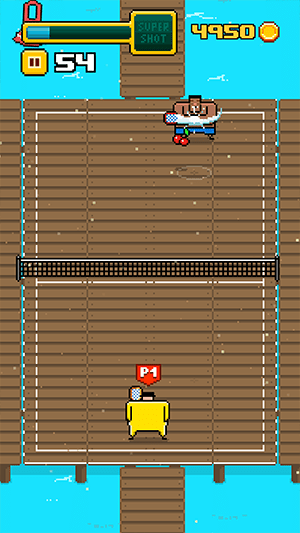 nbsp; You’ll be listening to an original chiptune soundtrack, along with nice tennis sound effects to keep the old school arcade feeling going on. It’s also worth mentioning that the game’s announcer sounds crystal clear and has many different phrases so it doesn’t get repetitive after a long play session.

Value for your Money 77%

Timber Tennis is free on Google Play and the Apple App Store, but you will see video advertising every time you lose, which can be way too often for the average user. Only if you really get addicted to this game consider getting the no-ads version.

Timber Tennis is not as fun as Smashy Duo or some titles that take the Pong formula and take it to the extreme, but it is a very enjoyable title that you can play in short bursts, and it’s always fun to try out a new character, play with another ball and see the details in every court. Check it out if you want simple “retro” entertainment. Pros Cons