Help Mambo and his crazy troop of heroes to escape from hundreds of enemies, jumping and dodging as quickly as possible on the backs of some of the most picturesque crafts whilst firing immensely powerful weapons. Run, Jump and Shoot on the Ramboat!

Ramboat is an endless sidescroller shooter where you sail on a boat that’s being attacked by enemy soldiers falling from the sky in parachutes, planes, helicopters and submarines. 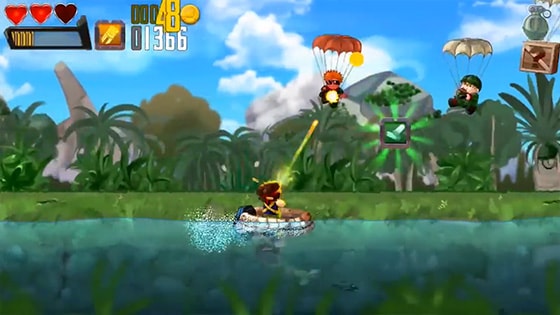 The gameplay is simple, the Ramboat is always advancing and by default it stays in the middle of the screen, moving at the same speed as the level is scrolling. Touch the right side of the screen to speed up and reach the edge of the screen, swipe up to jump, swipe down for a quick dive, and press the left side of the screen to slow down. You start shooting with your equipped weapon when you get close to an enemy, who explodes leaving behind golden coins with enough shots. You can use them for upgrading your guns and boat, and buying different starting boosters and power ups. You start out with a handgun, but along the way you can collect a shotgun, flamethrower, rocket launcher, machinegun and more. Besides shooting at military and war machines trying to stop you, sometimes boxes with items like extra health and ammo drop down. You start out with 3 hearts, and every time you get hit you lose one. When you reach zero, you can trade some coins to continue, or start over. Also, since your weapons have limited ammo, keep an eye out for ammo boxes. The game is divided in areas, you’ll start in a jungle, then go to an icy lake, reach a beach,later arrive to a city river, and so on. At first you’ll only fight not so tough to beat infantry, but as you go on you’ll get harder to destroy enemies who will not go down so easily; so it’s a good idea to upgrade your fire power everytime you get a chance.

Ramboat features a very good looking hand-drawn art style. The cartoony characters are fun to watch, and they’re very well animated. The overall visuals may remind of the classic Metal Slug series, but characters here are a little more round and cute looking; even machines look like toys. 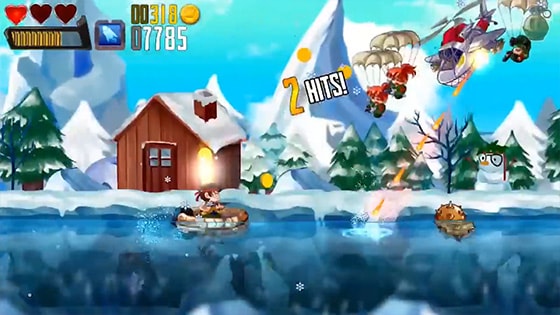 The explosions and special effects are very well done, with many flashy lights and shiny sparks appearing with each bullet shot. You can also see snowflakes falling down in the ice level, cherry tree petals in the Japanese stage, and many funny details in the backgrounds. You can also see your reflection in the water and the splash effects look awesome. With so much stuff going on, the game will never slow down, the frenetic action will always be top notch. It’s also worth mentioning that the title screen, menus and other static art is of very high quality.

Ramboat has 9 different areas where you can blast the enemy army, with an arsenal of guns at your disposal, and more of a dozen characters and boats to unlock and play with. 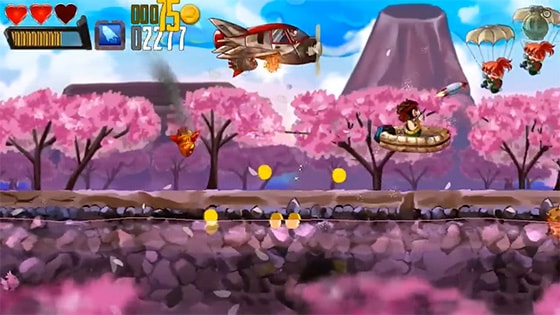 There are hundreds of quests and missions you can take on, even if the main game mode is pretty much the same, the different special objectives you can complete to earn medals and extra coins, really make this Sail N Gun a lot more entertaining. And like classic arcades of this genre, there’s multiplayer so you and a friend can play together. Take in mind that the game will get tougher with more enmies thrown at you, in order to keep the challenge the same for the two of you.

Ramboat is free on Google Play and the Apple App Store. You will see some advertising when you lose, but since each play session can take several minutes, ads are non intrusive. Also, you can buy coins here to power up through in-app transactions, but you can level up at a good pace just by playing without spending a dime.

Ramboat is a great shooter that combines endless runners with the non-stop action of 2D shooter arcades. The controls are very easy to learn, and pretty intuitive for the average mobile user, and while it starts with a low challenge, it won’t take long until you feel like an 80’s war movie hero sorting all sort of dangers. Definitely try it out even if you’re not really into games such as Metal Slug and SHMUPs. Pros Cons