Banana Defender by Hexeon Studios is a Tower Defense title that will text your swiping skills to the max. Slash through hundreds of primates and use power ups to survive as long as you can in the 3 maps the game offers and get your game in the online leaderboards.

Banana Defender is a Tower Defense game mixed with elements from Fruit Ninja and similar games. There’s a banana batch in the middle of the screen, and monkeys will appear from all sides of the screen and go there, trying to grab one of the bananas and then escape with it. Your job is to swipe the screen slashing the monkeys before they steal a banana. 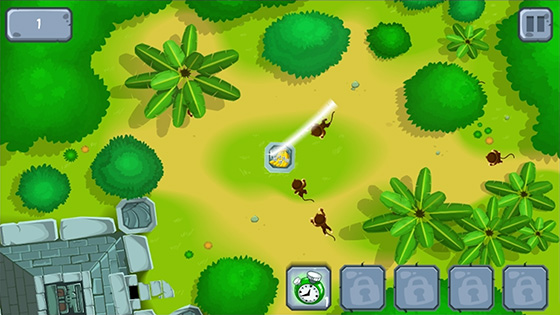 It’s better to attack monkeys before they even get close to the banana batch. But if they take one and then you attack them, they’ll leave the banana in the spot you hit them, and you must tap it to get it to the center again. Like most Tower Defense games, it’s divided in waves, and it’s all about surviving as many as you can. Every 5 completed waves will earn you a title such as “Monkey Swiper” or “Banana Defender” You start with 5 bananas in the batch, and you lose when you get them all stolen. Beside monkeys, there are big apes that tae two hits, the first one stuns them, and the second one sends them away. By the 10 wave or so, giant gorillas will start appearing, and they take 3 hits before you get rid of them. There’s also a very fast baboon that appears from time to time, and if you manage to slash it, it will drop a power up icon, you tap it so you can use it. The Power Ups you can use are a Shield for the banana batch, so monkeys can’t get close, an Earthquake that attacks all enemies on the screen at the same time, a Slow-Motion clock that makes them move at half they’re usual speed, an Electric Swipe that’s wider and more powerful than your usual slash, and Clone Bananas, which are transparent traps that appear in random parts of the level, andt take the attention of monkeys, so they go for them instead of the real batch. After each playthrough, you get to spin a wheel that gives you power ups, or golden coins so you can buy items and upgrade your arsenal against the monkeys. If you manage to clear 15 waves, you unlock another map, there are 3 available: forest, temple and river, which can have 3 different banana batches scattered on the level.

Banana Defender features a 2D hand-drawn style. The backgrounds look nice, colorful and are pretty detailed, but the animals seem to be a little simple in design by comparison, and don’t have very complex movements, their only animations are walking and grabbing the banana. When you hit them they fly away like a static picture, just get a fading animation and get bigger to give the feeling that they flew to the camera. 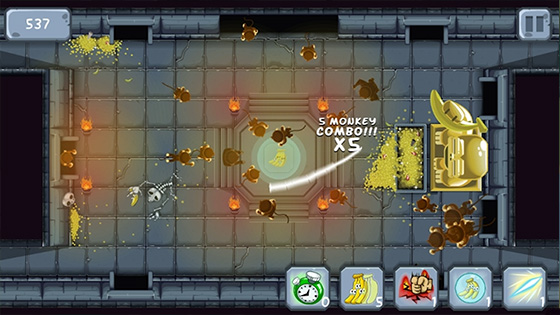 The swiping effect is not very flashy, when you activate the Super Thuinder Swipe if looks much better. It would’ve been nice to see the monkeys get zapped and an X-Ray effect like in happens in other videogames, but the disappearing animation is the same. The other power ups don’t look too fancy either, the Super Slam just create a giant white circle from its icon and makes all animals look away from the banana batch and disappear in their spots, but you see the screen shaking when you use it, to add to the effect. It’s also worth mentioning that the title screen and menus look as nice and detailed as the backgrounds. Overall Banana Defender looks OK, ot has the visual quality that you’d expect from a good mobile game, but it isn’t among the great 2D animation experiences other titles offer today.

Banana Defender is much more interactive than your average tower defense game. You will be swipping like mad trying to get rid of the hordes or primates coming for your bananas. 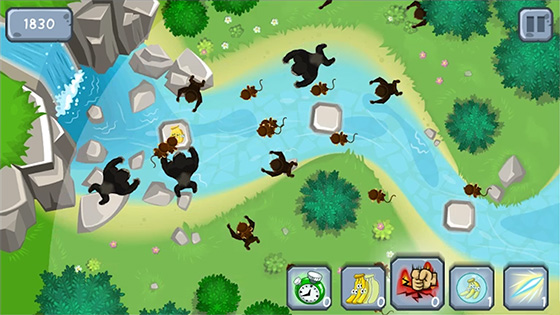 Each level has unique music and the monkeys have lots of voice samples for when you hit them, and tapping to collect power ups and recover your bananas is a nice touch. It starts pretty easy, but by the 12th wave your swiping ability will be tested to the max. For a fan of this types of games, it can be pretty addictive, but if you’re just a casual player, if may get tiring and repetitive, after playing the 3 maps and seeing the same kind of enemies and items, you may feel you got your taste of the whole game. There’s an OnLine Leaderboard so you can compare your score to players all over the world, and the developer is working on adding new maps and power ups, so you may want to stay playing for a while and see what’s coming next.

Banana Defender is free on Google Play and the App Store. You’ll see some banner advertising when you lose, and it’s not really annoying since each playthrough can last several minutes. When starting a level, if you’re out of power ups you can choose to watch a video ad to get more, or you can buy golden coins through in-app transactions and then buy upgrades and items. While you can unlock everything just by playing and spinning the wheel after each play, it may be too difficult and take quite a while before you see everything the game has to offer without spending a dollar on it.

Banana Defender will have you swiping your screen hundreds of times ir order to protect your yellow fruits for the monkeys. It’s pretty simple, yet extremely challenging if you want to set a high record and be recognize in the leaderboard. While it could be better in some aspects, it’s a nice option for fans of the genre, and those looking for a fruit ninja on steroids. Check it out if you feel like slashing your screen with your finger a thousand times. Pros Cons