Vector by Nekki Games is a Runner Platformer with simple motion controls but a complex parkour inspired character movement that’s sure to keep fans of sidescrollers entertained by pulling up over a hundred acrobatics moves. Run away from the cops and reach your freedom by escaping the concrete jungle.

Vector is a parkour inspired runner where the objective is to reach the end of each level by jumping, sliding, climbing and performing acrobatics where necesary to avoid the police and obtain freedom. 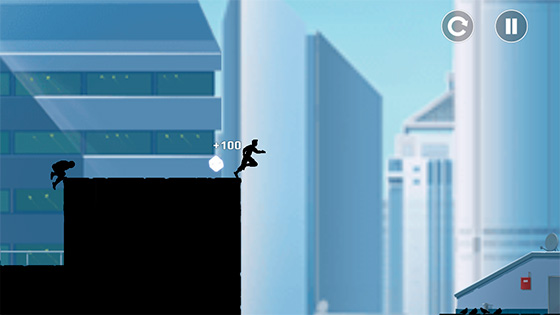 At the start of each level, your runner enters the scene being chased by a police officer, so you need to move as quickly as possible, avoiding gaps between buildings, sliding down water containers, entering through windows and jumping furniture, etc. You run automatically, to jump, you slide your finger across the screen upwards, to slide, you do the motion downwards, and to speed up and run at high speed, you do a motion from left to right. Jumping while on a sprint makes for a giant leap to jump from far appart buildings. Depending on the speed and position of your character, you’ll perform different parkour moves. For example, ff you fall down from very high and going at high speed, you’ll roll over when you land so you won’t lose much speed. If you weren’t going very fast, you’ll land of you’re feet and fall to your knees, losing all speed. Besides finishing the level quickly, you can get extra points by collecting silver and golden coins, and for Performance Rating, you get white shining cubes positioned through the level, as well as performing Special Acrobatics in certain places. If you obtain everything and under a certain time, at the end you get a 3 Star Rating, from Level 5 and on, you need coins or stars to unlock more missions.

Vector features silhouette character animation over an urban background. The player and officer have excelent human animation that just looks natural and at a smooth frame rate, no matter what position the characters are while performing an action, you will always see the full motion, with the body parts moving how they supposed to, and no “frame skipping” or awkward time jumps like in other games. 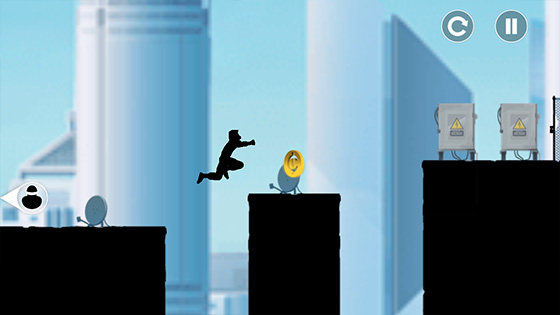 The enviroment is made up of 3 layers. The front layer is completely black, so you’ll notice the platforms and elements you interact with quickly. Also the items you collect are perfectly visible. There’s a layer on the back that scrolls a little with you and has full color stuff like anthenas, coolers, electric equipment, and when you enter an office you’ll see computer desks and stuff. And there’s a far away background layer with an urban setting that moves with the camera pretty slowly, giving a 3D depth with parallax scrolling. There are other stuff such as birds standing on ceilings that fly when you get close, and windows smashing when you enter a building with a giant leap. And finally, the camera zooms in and out depending on the action. Overall, it’s an excelent visual experience, but sometimes there are segments where a little more color wouldn’t hurt the game.

Vector stands out from the sea of runners on the mobile market because of the variety of moves you can perform. Over 100 parkour moves you can pull off, which gives it a lot of replay value, since making a jump half a second sooner or later will change the action being made. This keeps the game fresh, and there are at least 2 or 3 ways to overcome the same obstacle, inciting you to try out new ways to beat the level. 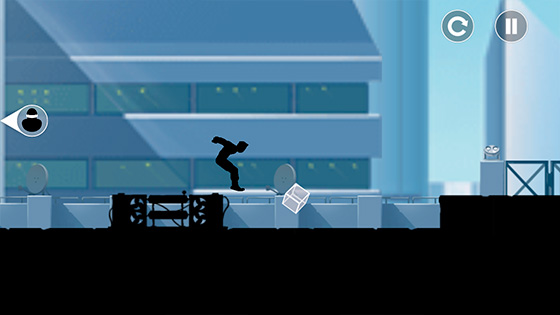 Completing a run is hard enough, you may end of falling down a void or not reacing a windows, but there’s someone running after you, so you need to be quick and precise; but for hardcore gamers, there’s collecting items and the Special Acrobatics, that should keep you entertained once you complete each level, boosting its Replay Value. It’s also worth mentioning that there are voices, sound effects and different songs playing, so the sound work is outstanding. While some motions won’t work while they’re supposed to once in a while so the control isn’t perfect, you’ll let it pass and try again since Vector is an outstanding game in every aspect.

Vector has a free version you can download for free on Google Play and the App Store, and while it’s not necesary, you can get the Full Version for just 99 cents. Given the quality of this game, it’s a great offer you should take advantage of. Try out the free version, and by getting 3 Stars or enough coincs, you’ll unlock every level, or just go on ahead and buy it to support the developers, who made one of the best Runners out there.

Vector is an excellent runner in every aspect. Even if the gameplay if basically dragin your finger in only 3 directions, the level design and great animation of the many moves you can perform can keep you hooked for quite a while, and if you enjoy sidescroller games of this style, you should definetely give it a try, you may end up buying the full version. Pros Cons