You are a monster summoner in the Puzzle Kingdom. A battle tournament has opened on behalf of the Princess who dearly loves the monsters. The winner of the tournament gets to tie the knot with the beautiful Princess… Dazzle us with your puzzle skills!

Puzzle Royale is a fast paced match-3 battle game with RPG elements where you summon monster every time you match 3 or more of the same type of icon in the grid. Your objective is to defeat the other summoner in the arena, level up your monster cards and win the Puzzle Kingdom Tournament to marry the princess. 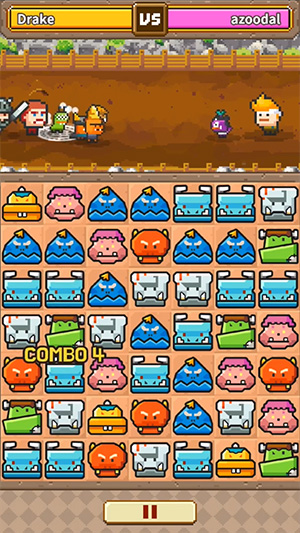 The battle will be happening on top of the grid. Just touch a monster icon and drag it up, down, left or right. If a match is made, the icons will disappear and you will summon a monster that will go to your opponent to attack. If it meets a rival monster, they will fight each other. If you summon monsters quicker than your opponent and clear the way, you can attack directly and start depleting the enemy Hit Points. Once it reaches zero, you win the match, and collect coins. If you take too much time making matches, your opponent’s monsters may reach your character and attack you directly. You have a defensive thunder magic you can activate pressing an icon in the bottom right part of the screen; but if you’re defenseless, you’ll take direct damage to your HP bar, and once you’re out of HP, you lose the match. You will still earn a few coins, but only about 10% of the prize you would’ve gotten by winning. By winning matches, you get monster cards, so the next time you make a match, you can get another new and stronger creature to help you. With the coins you earn you can also level them up, increasing attack power and hit points. You can also buy Mercenary Cards, which are usually more expensive to level up, but they’re more powerful and can attack from far away with arrows or magic. Like it’s usual in the genre, if you make a 4 match, you get a bomb icon that explodes vertically or horizontally when used in a match. If you make a 5 match in a T or V shape, you get a bomb that takes out the surrounding icons when connected. If you manage to line up 5 monsters, you’ll receive a rainbow monster, that eliminates all the icons of the same type you switch it with. As you play, you’ll get to enter special tournaments, training modes and championship matches where you’ll fight against more powerful opponents and get bigger prizes.

Puzzle Royale features a blocky 2D pixel art visual style. While the icons and tiny square-ish characters aren’t very detailed, you can notice their facial expressions and have nice animation. 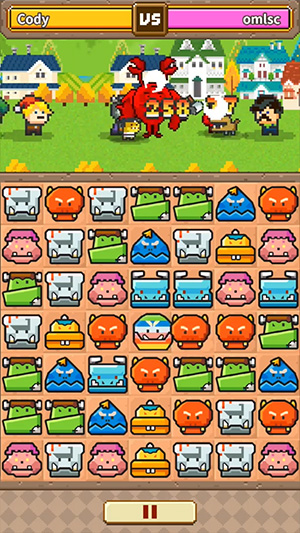 There are many monsters and mercenaries you can summon, and there’s variety in the characters you can choose and fight against. While they’re pretty blocky, they have enough changes to look very different from each other. The backgrounds are simple yet colorful and you can make out elements such as trees, houses and castles. You can fight in a grass field, in the mud, or in front of the king in the royal garden. There are some special shining effects when you summon a monster, and also the magic attacks, which have glowing light surrounding the simple lines that make up the power beams. Overall the game looks good, but not exactly the best pixel art game out there.

You’ve experienced gameplay similar to Puzzle Royale in many similar titles, but here is very fast paced, reminding of Diamond Dash, with monster battles and RPG elements that make this game much more addictive. 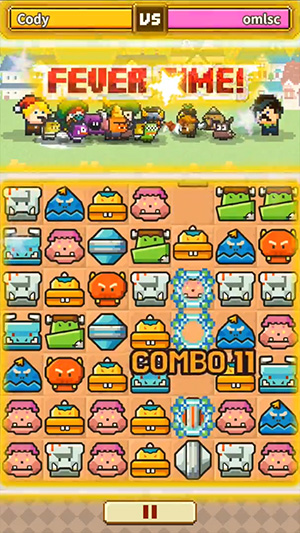 The whole level up system adds replay value to the game, and you’ll probably go back to battles just to gain enough gold to get a new mercenary card or power up a certain type of monters. Also the addition of magic attacks it’s a welcomed feature. There’ also a story going on that you see via comic strips, with a cute round colorful drawing style. The music also changes according to the setting and they’re quite catchy chiptunes.

Puzzle Royale is free on Google Play and the Apple App Store. With normal gameplay you won’t see ads, you can choose to watch a video to double up your gold after a battle, or to speed up the level up process of a monster. You can also buy gold and diamonds with real money, but this game is pretty well balanced, and it doesn’t feel like it’ll take forever to get coins, level up, and be able to beat the higher monster puzzle leagues.