Evil minions want to squeeze the planet into a square shape. Red Ball to the rescue! Roll, jump and bounce through 60 exciting levels of puzzle platforming adventure. Make your way through tricky traps and defeat all cube monsters.

Red Ball 4 is a puzzle platformer where you take control of a crimson sphere with a face that has to stop evil cubes from turning everyone and everything into a square shape. You can roll to the sides to advance and push boxes, activate levers and move other items in order to keep on your way. You can jump to get to high areas and also stomp on enemies to eliminate them. 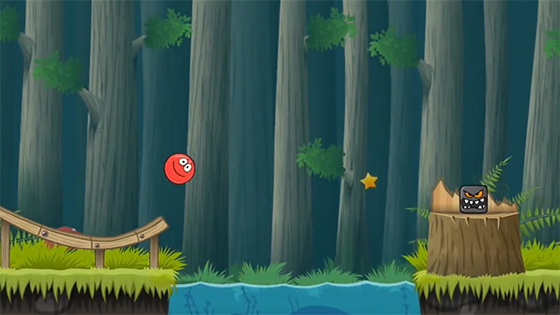 The levels are designed so you need to think and use different elements in the area so you can reach some really high up platform, get down a ramp so you can roll on it, gain enough speed to make that giant leap, go through those lasers and many more obstacles you’ll encounter. The most common enemy is a square stone monster, that takes away one of your 3 hearts when you touch it, and there’s a cyborg cube that self-destructs and its explosion can kill you instantly. After 20 levels you have a Boss Fight, that has a 6 hearts life bar and takes away all your hearts with one attack. At first the levels will be pretty short and only have 1 or 2 obstacles to overcome. Later on you’ll have many tests to pass, so there’ll be Check Points so you can continue if you fail. Your score is saved on the Red Flags that work as check points, so you’ll have to get those points back once again, but you always start with your full life. You get points by eliminating enemies and collecting stars scattered along the way. When you beat a level, you immediately go to the next one, but you can go to the Level Select screen and play an already cleared one if you want to try again getting a higher score.

Red Ball 4 features nice 2D hand-drawn animation. The ball you control has many expressions depending on your actions, like he gets happy when stomping on an enemy, gets surprise when a boss appears, and has a painful look on its face when it gets hurt. And the enemies also react to what’s happening. 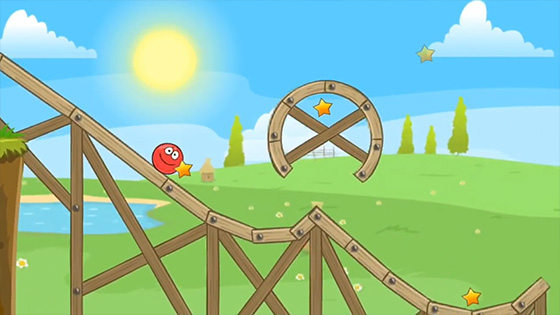 Besides the balls and squares, there aren’t many elements that move aroun, but the scenery look nice and colorful, and there are 2 or 3 layers in the background for parallax scrolling. At first you’ll be on an open field with wooden platforms, then you’ll go to a jungle where you need to jump over water and climb on trees, and later on you’ll get to the dark castle of the bad guys, where lasers and robotic traps will be trying to stop you. Even if mostly the same enemies and obstacles repeat themselves, there’s variety in the backgrounds, and some squares have a red headband or iron helmet to make things a little different. There aren’t fancy light effects or something really mod-blowing like some modern 3D games coming out for mobiles nowadays, but it’s a great 2D visual experience.

Red Ball 4 offers 60 levels of puzzle platforming, and every challenge is pretty unique. If you try to only reach the end of each stage, you’ll get enough obstacles to keep you entertained for a while, but if you try to get every star on each level, you’ll truly see everything the game has to offer. It’s a nice choice for Casual players and old platformer fans. 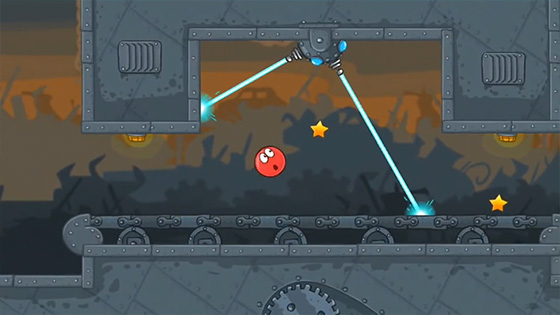 It’s worth mentioning that there’s different music according to the stage setting. Something calm and relaxed for the first levels, an epic tune for the boss fight, and a dark sounding theme for the later levels in the bad squares territory. The voice work is also well made, you’ll hear the ball say things like “ouch” or “yay” and the enemies also have many phrases. Besides the main objective, getting to the end of each level, there are achievements you can get, and you can aslo try the “Time Attack” mode for an extra challenge, so it offers some replay value.

Red Ball 4 is worth $5 on the Apple App Store, and while it’s a good game, there are similar title available for 2 or 3 dollars. The Google Play version is free, but there’s a lot of advertising and lives are limited, it’s one of those games where you have to wait several minutes until you get a new one, and given the difficulty here, you may end up waiting a lot before each play, which some players may not like at all.

Fancy Tale is a nice option if you’re looking for a casual game, or if you’re a puzzle fan and want to try out a new quality title. The gameplay formula doesn’t add much to the genre, but it’s perfectly executed, and with over 100 levels to play, you’ll spend a few hours of fun with this one. So let’s get to make those outfits and become the greatest fashion designer. Pros Cons