Wizard Golf RPG by Chris Zukowski is an interesting mix of Dungeon Crawler and a traditional Golf VideoGame with a 90’s adventure game pixelated look. It features simple pick-up-and-play gameplay and many courses to keep you entertained slaying monsters and trying to get a “Hole in One”

Wizard Golf RPG is an interesting mix of a traditional Top-View Dungeon Crawler with the rules of a Golf Game. It kinda feels like the mini golf courses in Mario Golf 64, where you just used the putter to roll the ball, and you had to bounce it against walls at the right angle to succeed in getting a ‘par’ 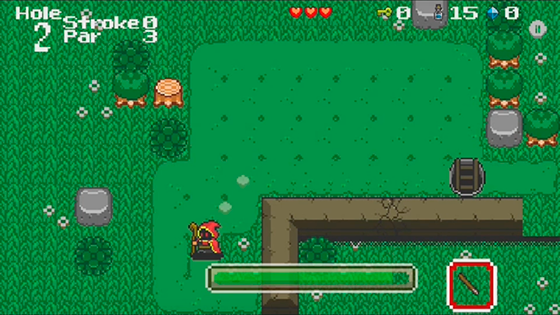 In this game, you play as a magician, who can transform in a blue energy ball. The control is pretty simple, you just need to tap in the direction you want the ball to go, and then tap on the ‘magic wand’ icon on the lower right part of the screen. A green power bar will appear, and when you tap on the icon again, the shot will be made. Just be careful about running into obstacles, and take into account that if the energy ball passes over grass areas, it will lose speed. There are also levels with rivers and lakes, where you have to avoid getting a ‘water hazard’ The overall objective of the game is the same as in Golf, reach the goal in as few moves as possible. The RPG aspect of the game, is that you can slay monsters, like the blue jellys inspired in the iconic enemy of the classic Dragon Warrior series. You can also collect crystals and use them to unlock other features in the game, and there are skulls that open up more courses to play.

Wizard Golf RPG features colorful pixel art, reminiscent of the 16-bit Console Era, it really looks like a game that came out on the Super Nintendo, like Zelda: A Link to the Past, just with a wider resolution. 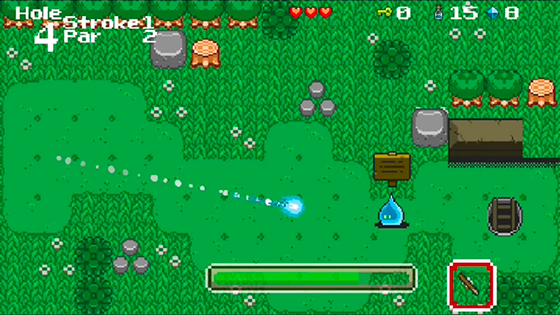 There’s nothing really noteworthy about the visual design, it just a really well made retro look, but it won’t be visually appealing to people looking for superb 2D animation. The characters move around a little bit, and there are some shine effects added to the crystals and some other in game elements, but overall, it’s like a game that came out in 1995. For old school gamers, it’s a welcomed style.

The idea behind this game is pretty original. As just an RPG or Golf game, it doesn’t really stand out in gameplay mechanics, but combining these 2 genres, creates a truly unique experience. 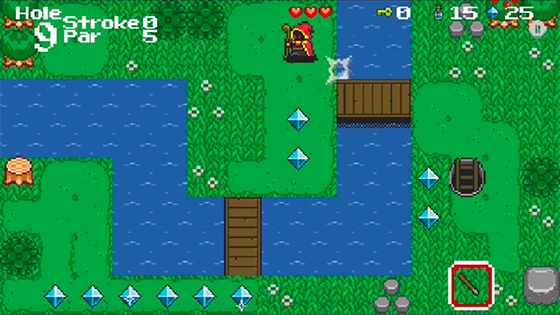 It’s not exactly addictive, or very fun to play, it’s just feels so different from anything else out there. Sure the graphics and music can make you believe that this is an old school style Top-View Adventure Game, but after playing a few holes, you get the whole idea of just making the sport an entertaining little app. Overall is a pretty good game, not particularly outstanding in any aspect, but just a nice free game you should try out if you want a break from all the Match 3 Puzzles and Infinite Runners/Jumpers available for Mobiles.

Wizard Golf RPG is completely free on the App Store. You won’t be annoyed by banners or have a video commercial every 30 seconds… You don’t need to purchase anything in order to completely enjoy the game, so try out now if you want to play something different from the usual featured App.

Wizard Golf RPG is a very interesting concept, combining a traditional Dungeon Crawler with a Golf game and throwing in a retro pixelated visual style creates a unique app worth playing for a while. It doesn’t really offers hours and hours of fun, but it should give you some minutes of entertainment, and for free! Pros Cons