A perfect Neo-Geo port with added features! A high quality Arcade Fighting Game thanks to its game mechanics and its 16 charismatic fighters. Fatal Fury Special is more than an update to Fatal Fury 2, with its overall revised game balance and its brand new combo system!

Fatal Fury Special is a fighting game that came out for the Neo-Geo Arcade system back in 1993. It features 16 characters that can perform special and super special moves, as well as jump to the background and fight in that plane; a feature that was unique to the series. 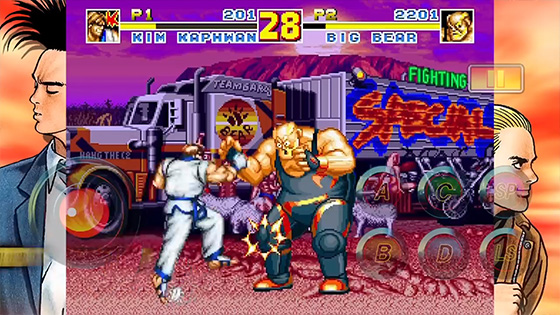 The original arcade had 4 buttons. Weak punch, light kick, fierce punch and strong kick. To jump to the background, you press the weak attacks together, and there’s a very strong attack that all characters perform, that send the opponent flying to the back layer by pressing strong punch and kick together. Here you have an “SP” button, that lets you do that without pressing both buttons, as well as an LS button to jump back and forth. You can pull off special moves by joystick plus buttons commands, like a quarter circle forward + punch for a projectile attack (depending on the character) but to make it easier for mobile users, you can just press forward and the SP button. Like most fighting games from the era, you just select one of the characters, and enter a tournament defeating martial artist from all over the world, until you fight off the boss character. Each fight is a best 2 out of 3 rounds, where you’re objective is to deplete your opponents energy bar. There’s a 60 seconds time limit, if the time is up and neighter character has been knocked out, the one with more energy left on the meter wins the match. An interesting innovation to the fighting game genre here, was the addition of “Desesperation Moves”, very powerful attacks that you could perform when you had about 20% of you life bar or less. If you were able to hit your opponent with one of these moves, you could take out about half their life bar, being able to turn the round on your favor. If you lose a match, you can choose to continue with the character you have, or choose another one, and there’s also a 2-Player mode to face off a friend.

Fatal Fury Special had a colorful comic book style that looked pretty cool back in the early 90’s, but it really haven’t aged that well. The animation looks a little stiff by today’s standard, unlike more modern Neo-Geo titles such as Metal Slug. 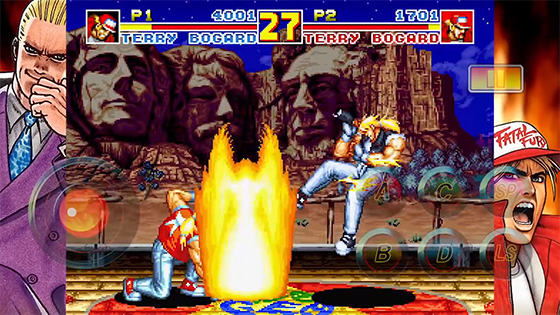 The characters have a pretty original design, and they all have very different moves and fighting style; unlike Street Fighter where there are many fighters with a very similar move set, in this game everyone feels unique. The energy blasts and explosions don’t look as flashy as some recently released 2D games, but they have transparency effects so they look like fire and light beams. The backgrounds are pretty detailed, with many people watching the fight from far away, and in some stages your in a moving platform, like a train or boat, and you can see the whole scenario moving around behind you, which gives a great dept feeling to the game. The menus have been redone, and you can choose graphic filters to see a smoother gameplay, and can select from 4:3 ratio or 16:9 widescreen. You can also customize the controls, moving the joystick and buttons where you want, and you’re even able to resize them, making them bigger or smaller depending on your taste.

Fatal Fury Special is a perfect port of the original arcade title, but besides the 2 new buttons for command moves and 2-buttons actions, there really isn’t much more. 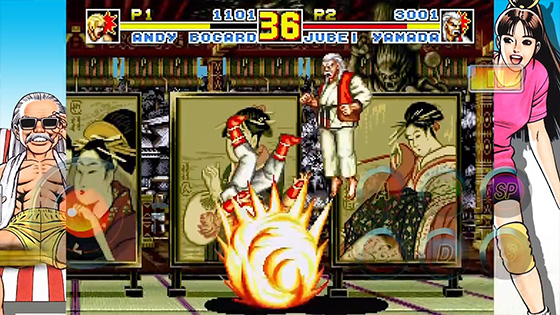 The virtual joystick works surprisingly well, and you’re able to pull off the Power Wave and Burn Knucle like in the arcade game, but since you can’t feel the controller like in the arcade or console ports, you’re make many mistakes, making the game pretty hard; and the problem is, there is no tablet control support, which is something to really complain about.

Value for your Money 66%

Fatal Fury Special is valued $3.99 on Google Play and the Apple App Store. Taking into account the age of this game and that you can buy modern fighting games for $5 with much more content, it may feel like this is a little expensive, and with no controller support, even retro gamers and SNK fans may let this one pass.

Fatal Fury Special is still a game worth playing for fighting arcade fans and old school gamers, but it just hard to play with the virtual controls, and it’s just no fun to play a game where it’s complicated to pull off the moves you want. If you absolutely have to buy everything Neo-Geo related, or are able to get used to playing almost anything on your mobile device, go ahead and get it; but casual players may not really like this title. Pros Cons