Cracking Sands by Polarbit is an action-packed racer featuring a band of merry lunatics driving small vehicles fitted with big guns. Mix and match pieces to create your own custom character and kart, then equip it with all the machine guns, missiles, mines and exotic implements of doom it can carry.

Cracking Sands is a racing game that takes place in a futuristic wasteland where you drive small cars with big guns. The car accelerates automatically, and you have 2 control settings. You can tilt your device left or right to turn to the sides, or you can slide your finger across the screen. There’s no reverse, or brakes, but you can jump, and even double jump by pressing a button on the left 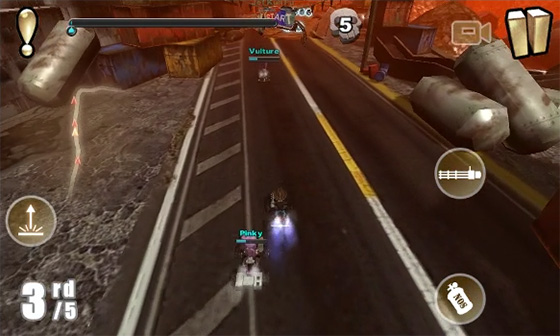 On the right side of the screen you have buttons to use the machinegun or the turbo. When you use them, you start depleting the energy bar on the top left part of the screen. It refills over time, but you can collect Batteries along the road, or run over a recharging platform. There’s also an item that makes you glow in blue lighting and gives you infinite energy for a limited time. In the way you can also get missiles and mines to use them against your opponents. The tracks have many dangers to overcome like broken bridges, lava pits, cliff you have to jump over and some obstacles like concrete walls here and there. In the first cup the turns are easy to perform and the tracks aren’t very complicated, but they get more difficult as you advance, and also your rivals become tougher. In close turns, you can drift by jumping, and keep the jump button pressed while turning, similar to how it works in Mario Kart. You have Time Trial, Single Race, and Campaign mode. When playing Cups, 6 racers are competing, and the objective is to be the one with more points at the end of 5 races. If you finish 1st in a track, you get 10 points, reach the goal on 2nd, get 8 points and so on… You don’t have to finish first or even among the top 3 in a race in order to continue to the next one, but you have the choice to retry the same track to see if you can earn more points overall. If at the end of a Cup you’re in the Top 3 drivers, you unlock the next cup.

Cracking Sands looks like an early PlayStation 2 game. The 3D models for the racers look OK, but nothing too fancy. You can customize their attire and some details, which is nice, and the vehicles can also be changed according to how you want them. 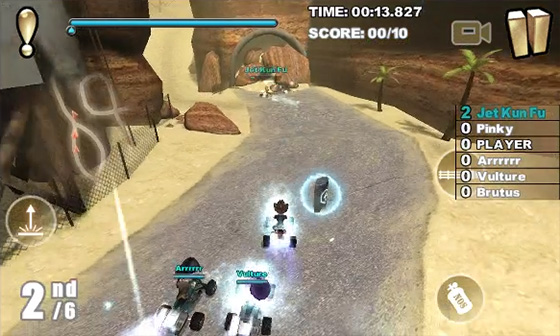 The tracks look pretty good and even if some settings are used 2 or 3 times, they all have pretty unique designs. You’ll be racing on the ruins of a highway, the desert, a mountain with lava pits, on top of buildings of a run-down city, and much more. The shooting and turbo special effects look quite nice, the lighting you see when using certain items and how it affects racers if pretty well done, and really adds to the visual appeal of a game that would look pretty plain without that. It’s certainly not mind blowing, and there are better looking racers overall, but while Cracking Sands’ graphics could look better by today’s standards, they’re nothing to complain about.

Cracking Sands features many single player game modes that should keep you entertained for quite a while, but its OnLine Multiplayer will definetely keep you going for a long time. Just the main Cups are an entertaining enough experience, but to be able to challenge players all over the world gives the game a lot of replay value. 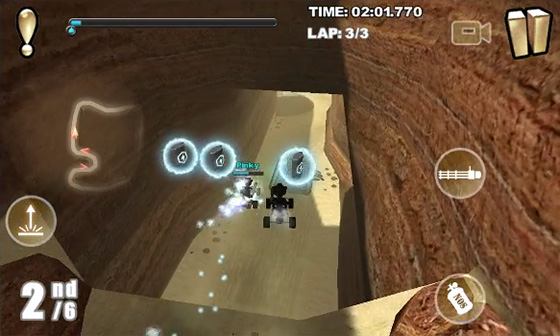 The gameplay may not be as smooth as console kart racers, or similar games where you can use weapons, but it works great for a mobile title, with simple motion and touch controls, the right amount of challenge and the tracks have shortcuts, coins and secrets to find, so you may have to play 2 or 3 times in order to discover everything the game has to offer.

Cracking Sands is $1.99 on Google Play and the Apple App Store. It’s a solid Racing Game totally worth the price. Racing games of the kind for PC or Console Digital Download are normally found at $5. And of course you may be able to find free similar racers, but the way they’re designed with lots of ads and in-apps transactions make you play lots of hours in order to unlock the next item for you kart, and here the gameplay it’s all perfectly balanced.

Cracking Sands is an OK racing game with motion and touch controls for simple yet challenging gameplay, and it has enough game modes to keep you entertained for a while, and after finishing them, you can go online and challenge players all over the globe. It’s regular price is perfectly reasonable given everything it offers, so if you’re looking for a wacky post-apocalyptic karts with guns mobile, game and you have a couple of bucks left on your account, consider giving it a try. Pros Cons