90 Degrees is a simple casual puzzle game where focus and timing is the key to win. While it starts easy, it can become pretty challenging (and addictive) after just a few levels. Check it out.

90 Degrees is a minimalistic puzzle game where you have to separate balls bouncing around the screen by drawing lines either vertically or horizontally. The objective of each level is to place each ball in its own square. It sounds easy, and it is at first, but eventually there will be so many balls on the screen, and moving around so fast, that things won’t be a piece of cake. 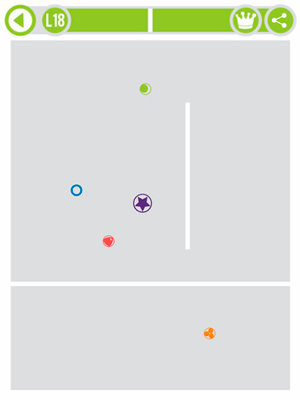 In order to draw a line, just touch the screen and drag your finger either up or down, or left or right, and the line will start being drawn from the center of the screen in the direction you draw it. If a ball hits the line end, you lose the level and have to start again, but if it touches the already drawn surface, it will bounce in the opposite direction. If you draw a line and create a new square without a ball in it, there won’t be any problem. The first minutes don’t represent much of a challenge, but after a few levels the difficulty increases quite much, and you’ll need to time your lines really carefully. Overall is a minimalistic casual puzzle, that can get pretty addictive once you reach level 10 or so.

90 Degrees features a simple design, just a gray background with some round figures and white lines. Animation wise, there’s nothing going on besides lines drawing and balls moving around, so the game is definetely not eye catchy or a visual experience worth remembering. 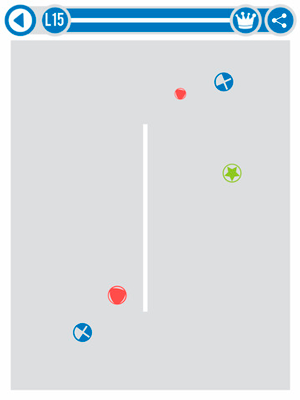 While it’s pretty minimalistic, the visual style gets the job done, and for this kind of gameplay, the user won’t really complain. It’s meant for casual players just looking for a few minutes of entertainment, and while there are similar games with cartoon character and fancy visual effects, 90 Degrees it’s still a good option.

90 Degrees seems to be really well tought in it’s game mechanics. The touch control works just fine, you will always draw the line where you intended, and the balls bouncing around have the physics you’d expect. 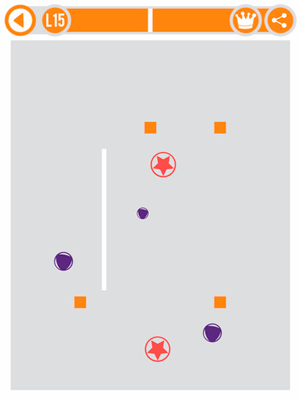 It doesn’t really have anything to make it stand out in the sea of minimalistic puzzles, but it’s a nice option for those who enjoy this type of games.

90 Degrees is completely free on Google Play and the App Store, and it’s also available on BlackBerry, so check it out, it’ll keep you entertained for at least a while, and by level 15, you won’t win the level at your first try.

90 Degrees is a simple pick-up-and-play puzzle game that while it doesn’t really has anything to stand out, it has the quality and entertainment value you’d expect for a free casual game on your phone or tablet, and it can get pretty addictive after playing the challenging levels, so it’s worth downloading to try it out. Pros Cons