Dropple by WebAlive is a new take on the Endless Jumper genre where you place steps in front of a ball that’s bouncing non-stop, and each time faster and faster. Will you take it nice and slow, ensuring that each step is place accurately, or speed ahead and place multiple steps in quick succession to get a head start early?! Dropple might seem simple at first but strategy certainly plays apart.

Dropple is a casual one-tap game where a ball is bouncing and you construct its way down. At first, a step will be moving from left to right in front of the base where the ball starts, tap so it stays in one place, so the ball can go down, a new step will appear and you have to tap to place it, but now the ball will be bouncing down even if you haven’t placed a step, if it falls down, you lose. 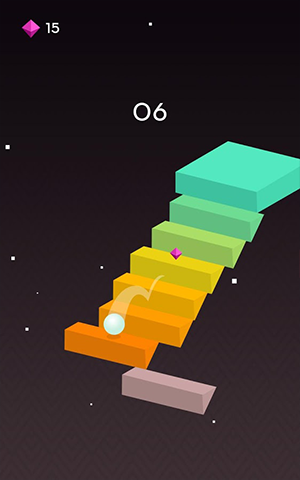 Some steps have diamonds you can collect, and you can later use to buy new balls or characters to bounce in the game’s store, so you have more variety than just the regular white ball. Besides the Classic Dropple Mode where the ball just bounces down, there’s Reverse, where you place steps while the ball goes up, Flat where you’ll be making a straight road, Vanish that has the step appearing and disappearing so it’s hard to know where it is when you tap, One Chance where every few taps one step just places itself in a random place, Flip where the step appears rotating in the middle of the way, instead of moving left and right, and you have to tap when the right face is up, and finally Slash that takes away from the step a section if you miss the center of the base, and then cuts away each part that’s not aligned with the previous step. There are achievements such as “Get 25 Points” in an specific mode, each game mode is endless and it’s all about beating your previous record. Pretty simplistic casual gameplay that’s fun just while you first try it out.

Dropple features a basic visual design with not many elements on the screen. There’s the ball or bouncing object that leaves a white transparent trail as it moves, the 3D steps of different colors, and a dark background with a pattern made of diagonal lines and white stars here and there. Nothing to complicated. 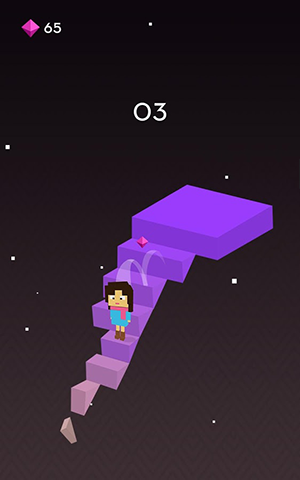 Every few steps, the ball will reach another base, and then the camera will rotate 90 degrees and the steps will start appearing in another side. That transition is smooth and gives a nice 3D feel to an otherwise simple visual experience. Overall, the graphics the game has just work out OK, but they’re pretty forgettable.

Dropple is not exactly an infinite jumper, since you don’t control when the ball jumps, but interact with the platforms instead. It’s an interestinga nd original concept, and can be quite challenging, but it doesn’t really gets addictive and the fun lasts for only a couple of minutes. 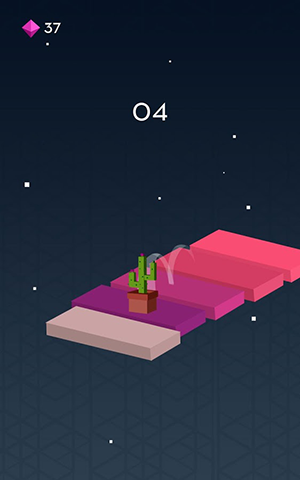 It’s a good thing you can buy lots of balls and other stuff such as people and even a cactus to see bouncing while you place steps, and collecting diamonds adds another level of interaction than just trying to survive, but the basic visual design and lack of music makes for an average title, meant for casual players that will surely just try it for a while to pass a few minutes. It should be said that the game is translated to many languages and there’s a tutorial, so it’s accesible to gamers all over the world.

Dropple is free on Google Play and the Apple App Store. After you lose a few times you’ll see a video ad, but that’s to be expected from this kind of games. There’s an ad-free version worth a dollar, and if you enjoy this game and play it for hours, it’s a reasonable price, but most players may want to by something with more production value.

Dropple is a nice casual game made for casual players to just pass a few minutes trying to break a record or get a new achievement. Its simple graphics and lack of music won’t keep your attention for long, but if you want tot try out something a little different than the common endless jumper, check it out. Pros Cons