Launch planets with a flick of your finger, and try to get them into stable orbits around black holes. Can you make enough orbits to progress to the next level?

The objective of Orbits is to launch a planet near a black hole to make it complete a certain number of orbital motions around it. Just touch the screen, and a planet will be created, then drag your finger to decide the launch power and direction, and release your finger to see the forces act out. Depending on the size of the planet, black hole and launch power, you may create an orbit. 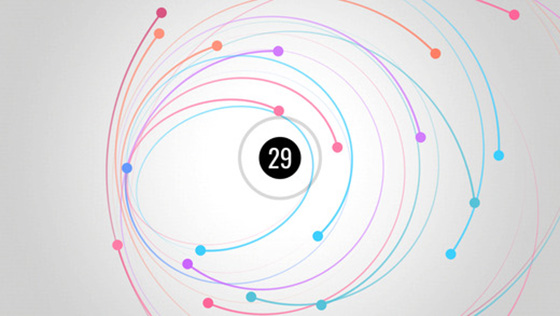 As you advance through the game, you will need to create systems where many planets orbit a single black hole, and later on you will have 2 black holes and the challenge will be to create a planet that orbits both of them making an “8” figure. In advance levels you will have repeling black holes, and planets of different sizes. By Level 8, when you touch the screen, the planet will be created, starting in a small size, but as you keep your finger on the screen, it’ll grow in size until you release it. This also makes it more difficult to aim and calculate the correct force correctly when you need to launch a small planet. Some stages will have you launching planets that get stuck together in order to complete the orbit, and other times you’ll need to make one planet go around 3 different black holes. With try and error and some physics knowledge, you’ll see that this is a very original and interesting concept for a puzzle game.

Orbits features a very minimalistic visual style. The black hole has a number in them that shows how many planets have to complete an orbit around it to win the level, and the planets have different colors, and they leave line traces with their movement over a blank background, and that’s it. 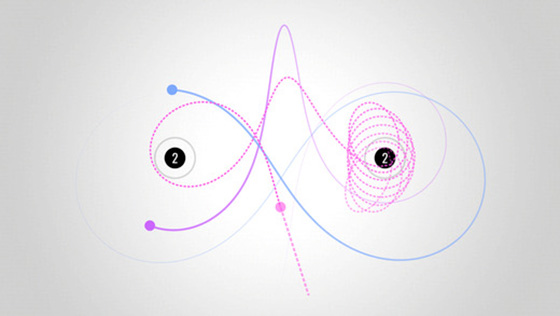 The only special effects you’ll see, are when you’re about to lanch a new planet, you can see the expected trajectory with a doted line, and the black holes have a gray circle around them going in to represent their gravity force, and the repelling black holes will have a circle forming from inside out. Overall, the graphics are extremely simple and you’ll likely forget about them since there are plenty of games with the same visual style, and while the colorful traces the planets leave may look good or “artistic” at first, it’s nothing really noteworthy.

Orbits has 45 levels for you to play, and adds new features for higher difficulty as you advance. The game has relaxing piano music and fits the visual style perfectly, and there are user created levels. 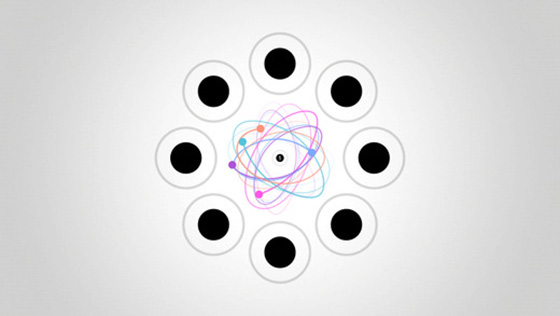 Many games feature the “slingshot” dynamic you see here when creating a planet, but the whole gravity forces aspect it’s something you don’t see often in puzzles, so it’s a nice original game you can try out for a while. In reality, since the graphics are bland and by level 10 you play with all the elements the gameplay offers, it becomes pretty repetitive, and seeing pretty lines won’t really get your attention much longer, unless you really enjoy mental puzzles with simple touch controls.

Orbits – Playing with Gravity is free on Google Play and the Apple App Store. You’ll see some ads when you finish a level, but that’s to be expected. There’s a no-ads version available for 99 cents, and a premium version that let’s you create your own levels and make entire universes with lots of black holes and planets. It sounds reasonable if you really want to create your own levels, but most users may be fine with the free version.

Orbits – Playing with Gravity has an original and interesting concept, but the visual style may be a little to simple, and kinda boring, for the common user. It’s a good puzzle to try out for a while, but it is not really addictive and it won’t get the attention of most player beyong level 10. To be able to create your own levels is a nice feature, if you want to pay the price, but overall, while it stands out from similar minimalistic puzzles, it’s not by much, so it’s only recommended for fans of thinking titles looking for something new. Pros Cons