Aim at breaking all bricks by one shoot: swipe your finger and throw balls, make them roll among the bricks, hit items to extend your ball chain. Now boost your score by skills and concentration, time to challenge with your friends!

Balls Bounce is a casual simple game that takes some inspiration of classic Arcades like BreakOut and Arkanoid, but with an easy mobile gameplay mechanic in mind, where you just have to aim and shoot. 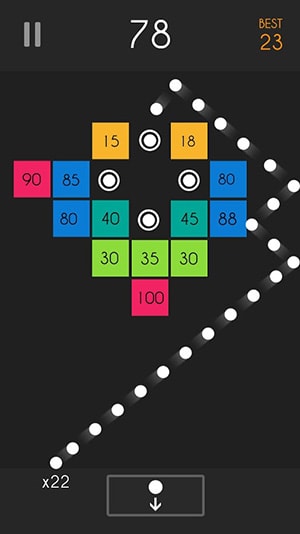 When the game starts, you’ll have a white ball in the bottom of the screen, and you only have to touch the screen where you want it to go, and release your finger to shoot. The ball will bounce around the bricks and walls of the level, and when it finally bounces back to the bottom, you’ll shoot again. The colored bricks have a number that indicates the number of times you have to hit them in order to break them. The bricks are slowly going down to the bottom of the screen, and once one of those bricks hits the floor, you lose, so hurry up and place your shots correctly. In the levels there are items represented with white dots surrounded by a circle, when you collect those, you’ll shoot an extra ball in your next shot, and they are accumulative, so if you keep playing without losing and collecting them all, you’ll soon have dozens of balls following the first one. Once you destroy all bricks in a level, you move to the next one, and as you advance, besides regular squares, triangle figures to destroy will start appearing, which will make a little harder to guess how your balls will bounce, given the new angles.

Balls Bounce has minimalistic design. You only see the colored figures over a black background, and the balls bouncing around. There’s not much animation going on, but the bricks break into several tiny squares when their counter reaches zero. 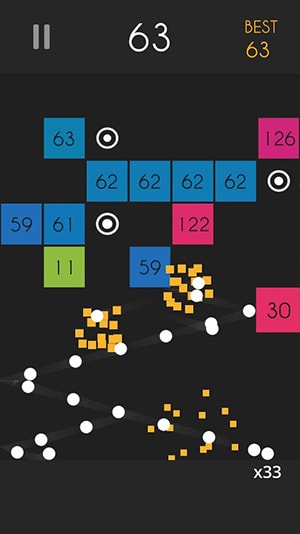 Is interesting to see lots of balls bouncing around at the same time without the game losing speed. Is common for mobile games to have slow down when there are many elements on screen, but here you can be bouncing about 50 balls and you still get smooth animation gameplay. Another noteworthy aspect of the visuals, is that the bricks start out with a dark blue color with 50 HP, and as you hit them, they start becoming bright yellow with each bounce. There’s not much going on here graphics wise, but at least the squares gradually changing shades of color is a nice touch.

Ball Bounce has a good way of presenting the classic BreakOut formula to new casual mobile users, but the game gets way too easy once you get enough balls, and given the simplistic graphics and lack of music, it really won’t hold your attention for long. 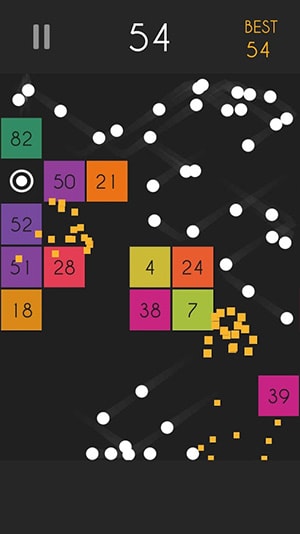 In order to beat almost every level quickly, you just have to shoot the balls sideways and they will bounce around hitting the same brick several times in the blink of an eye, and with the low level of challenge, it becomes pretty boring. Having triangles makes things a little more interesting, but by then you’ll probably don’t want to continue playing.

Balls Bounce is free on Google Play. You will see some video advertising every now and then, as it si expected from these kind of games, but nothing that will interrump your gameplay experience.

Balls Bounce is one of those games you download if you want something light, casual, simple that can be played offline. It is just something to kill some time while you’re waiting for the bus or have 2 minutes with nothing to do, since the brick breaking thing loses is charm quickly, since you don’t have a paddle saving balls like in classic arcades. Try it out if you only want a minimalistic title to spend 5 minutes on. Pros Cons