Saddle up and get ready to wrassle with the stampede-iest critters this side of the Savannah. Lions, Tigers, Ostrich and Bears are no match for this rodeo star. Hold tight atop these bucking beasts and you might just win their hearts. When the stampede’s over, the zoo begins!

Rodeo Stampede is a game about riding and taming wild animals running in a canyon to take them into a sky zoo located on a flying boat. You take control of the cowboy lasso guy who starts out riding a buffalo by placing your finger on the screen and dragging it to move to the sides, release your finger to jump from the animal, and you’ll see a yellow dotted circle appear, if an animal is in it, you can throw your lasso to it to ride it. 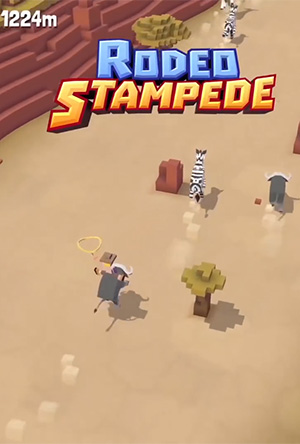 You must dodge obstacles like rocks and trees by moving left or right, and be careful not to stay on the same animal too long, since they get mad and start jumping in giant leaps, making it really hard to control, so you can easily crash into a boulder or run into another animal. If you jump and succesfully ride an animal, a little pink circle with a heart will appear over you, if you stay riding it until you fill it, the animal will be tamed and you’ll take it to your zoo. Everytime you catch a new animal, a “camera mode” will start, and you’ll have the chance to take a picture of the cowboy riding from the front. At first you’ll be catching types of buffalos and wild horses, then you’ll see giraffes, gorillas and big animals like elephants, which can actually run over small trees without slowing down. You can even ride birds and fly over the stampede, making it easier to travel. There are achievements to unlock to earn coins and improve your zoo. For example, ride a buffalo for 10 seconds gives you 50 coins, and then you can use that money to improve the buffalo’s section in the zoo, which will improve something when you ride them, like giving you 2 extra seconds before it gets mad and starts jumping like crazy. The overall objective of the game is to collect animals for the zoo, then earn money to improve it, and try to break your distance record in the stampede. It’s fun for a while, and it’s a little different than your average infinite runner with many challenges to overcome and lots of animals to unlock and ride.

Rodeo Stampede features blocky 3D models like the ones made popular by Minecraft. Most elements on the screen seem to be made by cubes, even when the cowboy falls down, you can see dust clouds forming from the ground, and they are tridimensional squares with transparency. 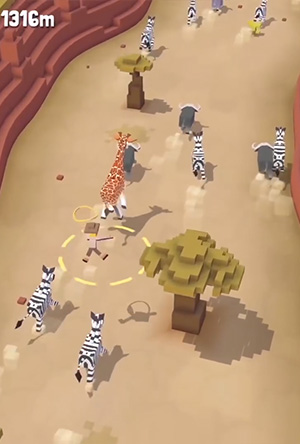 The cowboy and animals are well animated, and it looks funny when they crash and the character falls down hard to the ground, but there aren’t that many motions besides running and jumping. Overall the game just looks OK, and it seems like it lacks color, since you mostly see the light brown and the redish brown walls at your side. Even the trees look a little washed out and don’t stand out that much, but it’s understandable since you’re not really in a green area.

Rodeo Stampede can be compared with endless runner games, since you’re always trying to break your distance record, and as you travel more, new animals appear, but it has the collecting animals for the zoo element, which adds to the basic gameplay. 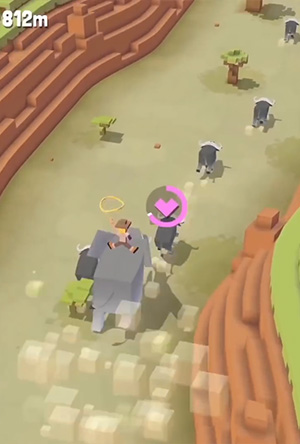 Managing the zoo and improving the animals habitat motivates you to go back to ride more and more, and after a while you unlock new areas to explore so you can get more species. Seeing you’re zoo getting better and people visiting gives you satisfaction, and can make you go back to try and break another achievement, in a game that you wouldn’t play much if it was just you’re average runner. Taking pictures to share it’s also a nice touch, and it’s always fun to find a green zebra or spotted eagle and shoot a new photo.

Rodeo Stampede is free on Google Play and the Apple App Store. There are in-app purchases so you can improve your zoo faster, but if you decide to earn coins just by playing it doesn’t feel like it’ll take forever like in other similar games. It’s a different way to play the genre, and you can download it right now without spending a dime.

Rodeo Stampede is a nice casual title that feels much different than you’re average runner, and it offers lots of animals to collect and achievements to get. The zoo managing part it well executed, and while the core gameplay of riding animals doesn’t change much, there are many different exotic species in different enviroments so it doesn’t get old quickly. The blocky graphics are not for everyone, but it’s a different experience you can have now for free, it’s worth a try. Pros Cons