How long can you survive the dark endless dungeons filled with traps and monsters? Enter the world of Redungeon, collect treasure, unlock new heroes and use your special abilities to reach as far as you can deep into this eerie place.

Redungeon is similar to Nitrome’s previous Dungeon Crawler Rust Bucket, where you enter dark castles filled with traps and monsters in order to collect treasure. Like that game, you move one space up, down, left or right by swipping the screen, but here you also get the option to get buttons on the screen to move around by tapping them. 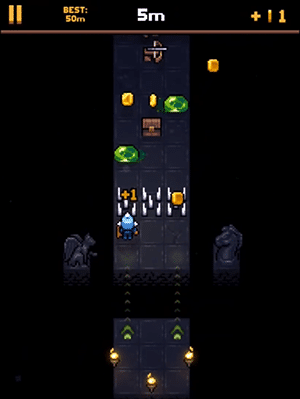 The main difference here, is that the knight can’t attack the jelly monsters (at least not at first) and you get killed when anything touches you. Along the way you’ll see golden coins to collect, blue and red coins that are worth more, and treasure chests that give you 10 coins or so. You use them to level up your character and unlock new ones, which have their special abilities. The knight can get a shield to withstand one hit, which you can level up to resist up to 3 hits. And you can also get a charging attack to eliminate jelly monsters, which takes a while to rechage after every use. Other characters such as the scarecrow can leap over sticky traps, and the vampire can turn into a bat to fly over voids and spikes. Dungeons are random generated, so every time you lose and start over, you’ll see something different. Many traps and level layouts repeat themselves, but they will be rearranged in a way so you can’t know for sure what’s gonna happen. Among the traps, there are spikes coming out of the floor, laser traps, fire, rotating blades, crossbows and cracked floors that will break if you stand over them too long. Besides the monsters you’ll encounter, in the bottom of the screen you will see a swarm of hellish bats following you, and if you take too long in an area, they will catch you and you’ll lose a life. When you die, you can choose trade coins to continue or restart. The objective is just to go up as long as you can, and break your previous record.

Redungeon features the pixel art Nitrome is known for. The game looks like a bright 2D platformer from the early 90’s. Characters and elements like fire and weapons are bouncy and always in motion, and while the visuals are kinda dark, everything you see seems to be lively and not to be taken so seriously. 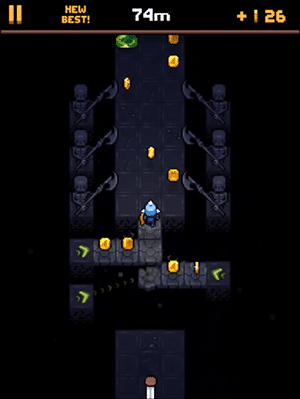 The area around your hero is brighter than the edges of the screen, giving you the feeling of really exploring a cave, and you can notice that torches are actually light sources and do make their surroundings visible. There aren’t many fancy special effects to see, mostly tradicional animation, but it’s so well done that it seems like you’re playing a blocky cartoon.

Redungeon is has endless, random, increasingly difficult dungeons, the more you advance, the harder it will get, but it’s charming enough to make you try again and again to get just one meter farther. 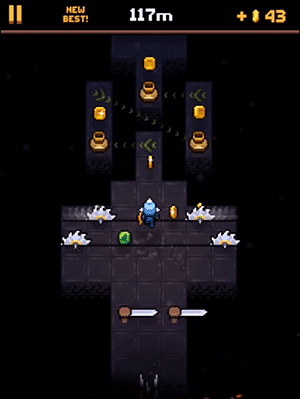 There aren’t any achievements, and the music is OK, fits the game, but nothing really memorable. The level design and customizable controls are the strong points of the game, and also the leveling up system and characters with unique abilities. Once you get far enough, you may think you’ve seen every trap and stop playing, but it’s sure to take you a lot of tries before putting down this title.

Redungeon is free to download on Google Play and the Apple App Store. You will see some advertising and can buy the no-ads version for a couple of dollars. If you play it for more than two hours, seems like a reasonable price, but most players will probably leave it in about half an hour.

Redungeon is a good endless dungeon crawler where everytime you play you’ll start out seeing something different, but after reaching about 300 meters, you’ll probably think you’ve seen everything, and since the game doesn’t feature challenges or extra missions, and it only has one song playing, it doesn’t have so much replay value. Still, is a nice top-view platformer with nice 2D animation and fun old school gameplay, try it out, you may end up wanting to unlock and level up all heroes to the max. Pros Cons