The Shadow Order have captured all the Wizards in the land and they have the ancient egg too. What is a lone Wizard to do? Break free, defeat the evil shadow order and find that egg of course …Hmmm I wonder what’s inside?

Drop Wizard Tower is an old school single screen Arcade Platformer similar to Bubble Bobble and Snow Bros, in which the objective of each level is to eliminate all enemies, and then go up to the next floor until you encounter a Boss, defeat it, and then repeat the same formula while collecting food for points and diamonds to buy new stuff. 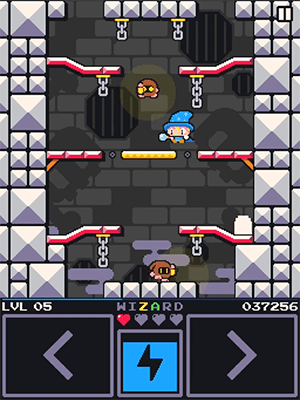 Teo the Wizard walks automatically left or right, and he changes direction when he bumps into a wall, but you can press the arrows on the bottom corners of the screen to walk in the opposite direction at any time. When he falls down from a platformer, Teo will shoot a magic star as soon as he lands, and when this spell hits an enemy, it’ll become stuned, and then you can kick it to send it flying. If you touch a monster that is not stunned, you’ll lose a life. When you kick a monster, you’ll send it rolling on platforms until it hits a wall and gets destroyed, but if it touches another monster in its way, that enemy will be trapped in the monster-ball an they will roll down together, and just like in Snow Bros, they can trap as many enemies as they come in touch with. The more creatures inside a monster-ball, the more times it can crash with a wall and still keep going. But after a number of hits, it’ll get destroyed, and then you’ll get an item for each monster defeated. You can not go up, but in the bottom of the level, there’s a pit, and if you fall down there, you’ll end up appearing again on top of the screen. The same happens in levels that have a path to the right or left edge of the screen, which was a common feature of single screen platformers around 1990. Between the arrows to control the wizard, you can see a magic battery that becomes charged as you destroy monsters. Once is full, tap it to unleash a powerful magic attack, that throws stars in all directions and enemies are defeated if touched by one. With the diamonds you collect, you can unlock new characters, and each wizard has a unique special charge attack. Finally, you can get magic potions with a letter on them, which end up writing the word “Wizard”. When you collect them all, you’ll pass the level you’re on, and go on to a Bonus Stage where you have limited time to collect lots of diamonds, and once time’s up, you’ll move on to the next level.

Drop Wizard Tower features colorful 2D graphics that look like an early 16-Bits console game like “Wonder Boy in Monster World”. It isn’t as detailed as the classic platformers the game is based on, and it repeats the same backgrounds too often, but the characters have nice cutesy designs and good animation. 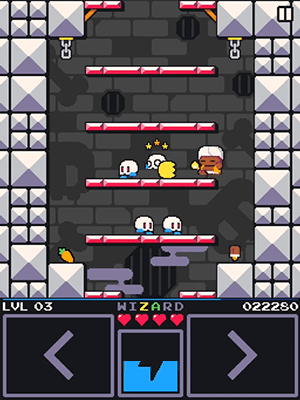 You can see that all the monsters react in their unique way to being attacked, and each wizard moves and casts spells different. Also, there are many items to finds, and while they look tiny on screen, you can sure make out what they are, like a carrot or a popsicle. The Bosses are huge and look pretty impressive, and have unique motions so they’re not just big versions of commom monsters. Also, there’s a story in the game told by cutscenes, where you can see the characters up close in portraits and different enviroments. Overall this game isn’t the greatest looking Nitrome has done, and there are many pixel art titles that have better visuals, but graphics here are sure to please retro gamers and those who enjoy this distinctive style.

Drop Wizard Tower has 50 levels, 8 Boss Fights, 4 Wizards to play with, lots of monsters to battle and items to find. There are also many secrets to discover in the game, such as pages from an old magic book that appear at random, and a special umbrella, that when you take it, let’s you fly up and skip many levels from the game. Similar to the Warp Zone in Mario Bros. 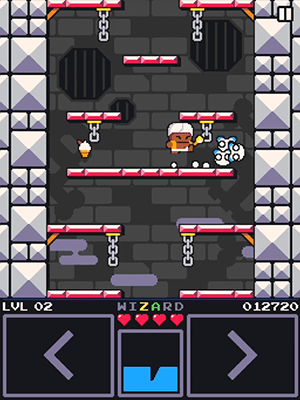 The music is made up of old school chiptunes that sure sound like an old arcade platformer. Also, the characters have some voices for when they move up a level or unleash their special attack, and there are funny cartoony sound effects for the actions in the game, which really make an entertaining experience. At first it’ll seem a little repetitive, but after the seconds boss levels will start having ice and fire hazards, floating platforms, and more difficult to defeat enemies like flying bats and fire monsters that leave a trail of flames in their way. There’s also a level up system where you can upgrade your stun power, speed or get an extra life. Finally, it should be mention that each time you play the levels will be scrambled, so you never play them in the same order.

Drop Wizard Toweris free on Google Play and the Apple App Store. When you lose, you can choose to exchange diamonds to continue, or watch a video ad. Still, a good player can pass several levels without losing a life, so it’s not really intrusive advertising; and you can buy the premium version for a reasonable price.

Drop Wizard Tower is recommended for those that miss old single screen platformers, but the controls are limited, the music is not as memorable and overall, the gameplay is aimed towards mobile casual users and the game is too simple compared to classic arcades of the genre. Sicne it’s free, check it out, you may play for a while, but maybe you won’t feel like playing all the way until you reach the 50th floor. Pros Cons