Flashout 2 is a futuristic racer where you ride high-speed anti-gravity vehicles in awesome high-tech tracks full of excitement. Not only do you use Turbo Boosts, but you can also use weapons such as MachineGuns and Missiles to slow down opponents and finish in 1st Place.

Flashout 2 is a racing game in the style of F-Zero and WipeOut. You ride an anti-gravity vehicle at high-speed in rollercoaster-like tracks. Your flying car accelerates automatically, and you only need to turn your mobile device to the sides to turn left or right, just like a steering wheel. 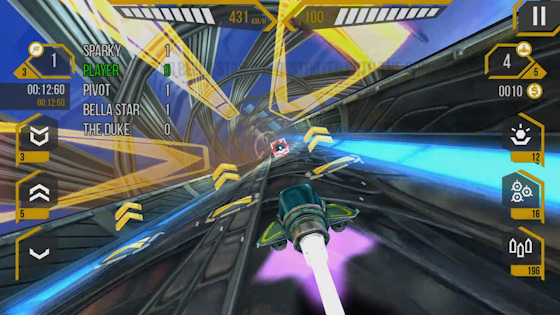 There’s a button to slow down a little in order to take close turns, and you can pass over yellow “Turbo Boosts” on the way for a short increase in speed. There are also gold coins, or “credits” you can collect, and use them in the game’s store to upgrade your vehicle stats or buy a new one. Just like in Mario Kart, you can pass over item boxes to get weapons, such as MachineGuns, Explosive Mines and Heat Seeker Missiles. New Icons will appear in the screen and you just need to press them to activate the weapon. In order for the missiles to work, when you follow another driver closely, a red icon will appear over it, and that’s when you get the “Lock On”, when you shoot the missile, it will follow its objective. Finally, you can also get a defensive Shield to be able to take more damage. Like in many Racing games, if you’re vehicle is destroyed or you don’t get a passing Place, you lose the Track. The overall objective of the game is to win all Cups, but you can also play single tracks and there’s OnLine Multiplayer.

Flashout 2 features great graphics, while it doesn’t match current PC budget titles, it’s one of the best looking Racing games available for mobile devices. The vehicle models are smooth and have reflecting surfaces, the tracks are huge and full of enviroment details, such as light signs and glass so you can see the futuristic cities in the background. 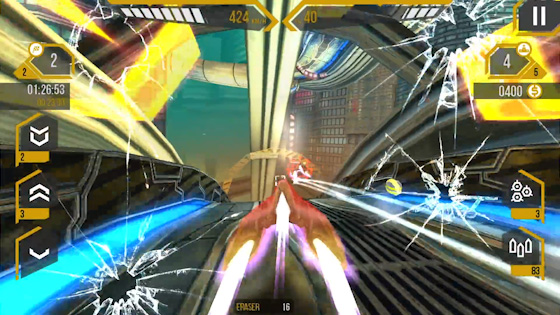 The game runs smoothly and at a high speed, no amount of action slows down the gameplay framerate (tried in an iPad 2 running iOS 8). The Turbo Boosts and explosions look pretty good and there are many lighting and transparency effects, such as when using the shield or shooting at an enemy. You can also see sparks when crashing and so many details that make this racer a more realistic experience. As a side note, the Story is shown in a Graphic Novel style, and features high quality looking art, in par with current Comics on the market today. Overall, playing this game is an excellent visual experience for Mobile Users.

Flashout 2 was created from the ground up for Android and iOS devices, so the game controls perfectly. The graphics are what you’d expect from a paid App coming from a n stablished studio. The music is OK, it fits the game, but not really memorable, and so are the sound effects. Also, there’s a back story that’s not just an “excuse”, but a really well tought script backing it up, using great Comic style cutscenes.

While the game has all that going on for it, gameplay wise is kind of simple. If you’re a fan of Arcade Racing games, you may be a little let down since it’s nowhere near as deep and exciting like F-Zero GX on the GameCube, which comes to mind when seeing Flashout 2 in action. But for a Mobile title, it’s a good option if you enjoy a more casual racer.

Flashout 2 is worth $2.99, and it may be worth it for people used to buying mobile games and that enjoy racers with motions controls, hardcore gamers looking for a WipeOut experience on the go, should really look elsewhere, or maybe wait until the game is on sale at 1 or 2 dollars.

Flashout 2 is a high quality game with nice motion controls, and it’s a nice option for casual gamers looking for a 3D racing mobile title, but maybe a dollar too expensive for the average player. Not recommended for F-Zero or WipeOut fans looking for a similar experience on the phone or tablet, since the gameplay may be a little simple for such players. Pros Cons