Juicy Jelly Barrel Blast is like an infinite jumper, since your objective is to get as high as you can, but instead of having your grape jelly character jump around by itself, you get it into explosive barrels to send if flying. 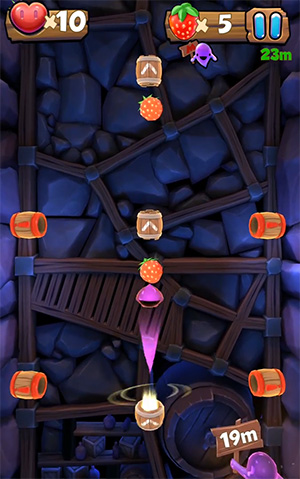 There are barrels marked with a white arrow, once your in, they may move to the sides or rotate, to blast out of them, just touch the screen. There are also red barrels, that explode as soon as you get into them. You can take your time inside a white barrel to aim carefully, but if you take too long, it’ll explode before you get to decide when to blast out. There are also more powerful barrels that will send you flying a long distance, which are useful to try to beat your previous record, but you can also collect stars and fruits along the way for score and life. When you lose a level, the collected fruits give you juice, that transform into lives to keep playing when you die. You start out with 10 hearts, if you lose, you can continue by trading one, the next time you lose, you’ll have to use two to go on, the third time you fail you need to trade 3 to revive and so on. When you get to a certain distance, you unlock fruits to collect, and also other jelly friends to play as. There are also some items to aid you in your quest, like a protector item that let’s you take one hit from obstacles like floating wooden boxes, or enemies like spiked jelly fish. When you equip it, it’ll for a limited time, so use it wisely.

Juicy Jelly Barrel Blast features colorful 3D models over a dark 2D background that has a design and color scheme that gives it a 3D feel. The fruits, characters and barrels don’t look very smooth, you can notice they’re made of polygons like in early 2000’s games. 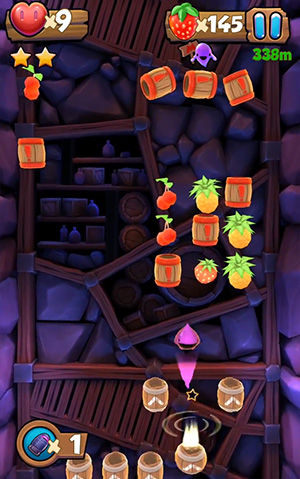 The explosion effects when the jelly is blasted look nice, and you can see golden stars forming and the jelly leaving a colored trail. When you collect fruits, you can see some juice dripping, and when you crash into an obstacle, the jelly becomes liquid in a funny and nicely animated way. While it may seem kind of “blocky”, the overall design reminds of Nintendo 64 or early PS2 platformers, and if fits the game style perfectly. The backgrounds could’ve used a little more variety, since it’s a cave that doesn’t change much, only has a dark purple hue or shadow red tone, and it gets boring to only see a cave the whole time.

Juicy Jelly Barrel Blast is endless, and it changes according to your own skill, it starts easy and soon you’ll be having real trouble trying to get to the next barrel or collecting the trail of juicy fruits in the alternative way instead of just going up. 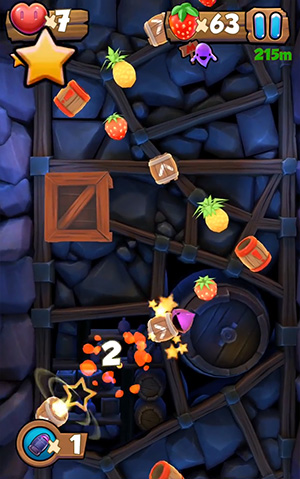 It has simple one-tap control, 35 achievements to get, leaderboards, helper items to collect and nice background music. While the scenery could’ve changed some more to spice things up, the gameplay is fun and can get quite addictive. It’s also worth mentioning that the game is translated to 9 languages.

Juicy Jelly Barrel Blast is free on Google Play and an iOS version is coming soon. You won’t see advertising with normal playing, but you can double up the juice you get when you lose by watching a video ad, and there are some unlockables that you can also get that way. You can try to get everything the game has to offer just by normal play, but that may take a long time, so consider buying characters and other elements if you really enjoy the game.

Juicy Jelly Barrel Blast is a fun game for casual players, and once you get high enough, it becomes challenging enough to give seasoned gamers a hard time. It has simple controls, colorful graphics, nice music and many items to get and characters to play with. If you enjoyed the explosive barrel levels in Donkey Kong Country in the Super Nintendo era, download it now. Pros Cons