Dash your way through dozens of deadly traps and puzzles, but be wary: You have only 10 seconds to reach the exit of each room and Duke can’t stop moving without hitting something first.

Duke Dashington is an action paced Arcade style game where you have 10 seconds to get out of a room before everything falls down on you. You have to be quick to find your way out of 30 rooms until you find the temple treasure, and then move on to the next one. 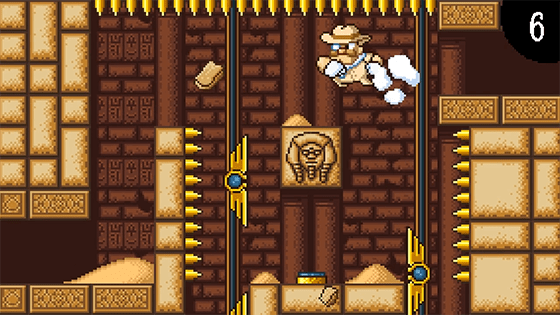 The Gentleman and Scholar can only dash right, left and up. You control him using the buttons in the bottom corners of the screen, but keep in mind that you can only dash up if you’re standing on a platform. When you dash, you won’t stop until you hit something, but while in mid-air, you can dash to the sides, and if you hit a wall, you’ll be able to dash one more time. Keep in mind that you can only dash up while standing on a platform. Each room has a set of traps to keep you from getting out on time, or there may be lethal stuff like swords coming out of walls, huge spinning metal balls or spikes on the floor, and if you touch them, you have to start over the room. Later into the game, you’ll find switches you need to activate in order to open gates covering the exit, moving platforms you’ll have to use to keep moving, and water flowing that won’t let you dash to the sides, only up.

Duke Dashington features colorful 16-Bits graphics like those popular in the mid-90’s. The sprites look quite big in the screen and you can see that the backgrounds are pretty detailed, as you can notice Egyptian hieroglyphs in the Piramid Stage, stone drawings in the Aztec Temple and so on. 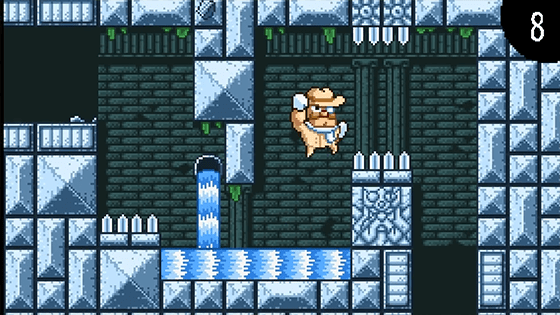 You won’t see much animation, but at least Sir Dashington moves a little when he’s just standing, when once you dash, the static image will just traverse the stage. When you’re time is up or hit a trap, you’ll see him in a funny reaction, and also when you’re trapped in the water current and see him swimming desperately. You’ll see much elements repeating themselves in each of the 4 ruins, but the overall level design can vary a lot just from one room to the next, with different backgrounds and ancient ornament in the platforms you get on to.

Duke Dashington has 120 levels to play in, with increasing difficulty, and sometimes when you enter a room, it will feel like a very different challenge compared to the previous one. 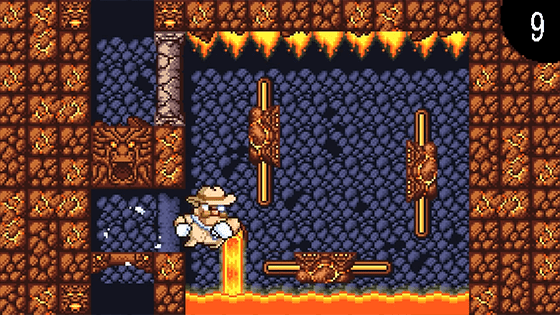 At first the puzzles feel pretty original, but given that you only have 10 seconds to get to the exit, the game isn’t really that complex, and because of its quick nature, it isn’t as deep in gameplay as you’d expect from a puzzle platformer. By the 3rd temple, you’d probably feel like you got the whole experience, since you’ll start feeling that the uniqueness of each room has faded away, and there isn’t really much to do but getting to the next room. It would’ve been nice to collect coin or other treasures and with them being able to buy Duke a new hat or to have some Achievements like passing 5 rooms without failing once for example.

Duke Dashington is free on Google Play and priced just 99 cents on the Apple App Store. The ads in the free version can show up a little too often given the fast gameplay, which means you’ll lose or pass through stages pretty soon, and after just a few times you’ll see a video ad. For less than a dollar, it seems like a worthy little app to spends about an hour or so playing.

Duke Dashington is a good choice if you want some fast action puzzle gameplay with retro pixel art. In some rooms you’ll get stuck and try again and again until you figure out the fastest way to get to the exit, but after a while it’ll get pretty repetitive and lose its charm. Still, it’s a unique experience you should try out everytime you have 10 seconds to yourself. Pros Cons