Do you like dark medieval adventures, with gloomy castles and foggy forests? Do you like platformer & puzzles? Do you like retro gaming style? Then this is your game!

To The Castle is a retro style sidescroller platformer where you take control of a knight that most find the exit of dungeons while fighting orcs and bats, avoiding deadly spike traps and collecting coins and treasures. 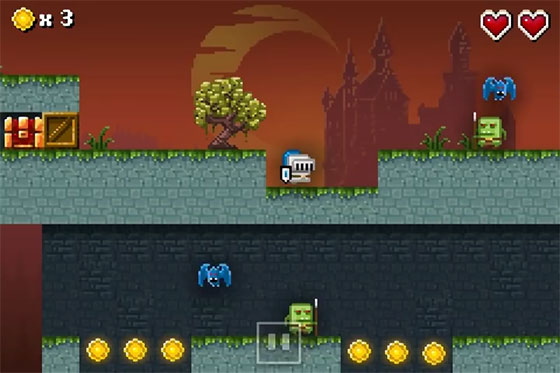 When you begin a level, tap the left or right side of the screen to begin walking. After you start, the knight will continue advancing automatically, and will only change direction after bumping into a wall. You tap on the right side of the screen to jump, and the left side to do a dash attack, that you can also perform while in mid-air. If you’re walking on a platform edge and fall down, you can perform a mid-air jump, but you can’t do that if you initially pressed the jump button. The objective of each level is to find the exit and continue to the next stage. Sometimes the door will be locked, and you’ll need to get the key somewhere in the room, but it’ll be surrounded by traps and monsters. You can defeat most monsters with your dash attack, but there are some with a shield that can’t be defeated by a front attack, at least not until you level up. With the coins you collect, you can upgrade your armor and stats. If you get the steel shield, then you can defeat armored orcs with a front attack, and you can buy a neclace relic that gives you an extra heart. You start with 2 hearts, when you take a hit from a monster, you lose one, but if you fall into a spike trap, you die no matter how many hearts you have left. After beating a few levels, you’ll find trampolines on the floor and on walls, that you’ll have to use to get to high platforms. Also, some levels have hard to access areas with treasures, such as gold plates worth 10 coins, or treasure chests with a golden artifact worth 50 coins. Besides gold to buy items, you can also use diamonds to skip levels, but you have to buy through in-app transactions.

To The Castle features old school pixel art. While it goes for a medieval eerie look, the dungeons and outside areas of the castle actually look pretty colorful, but still retaining a dark style, kind of like Ghosts’n Goblins, just toned down, and it doesn’t use so much black. 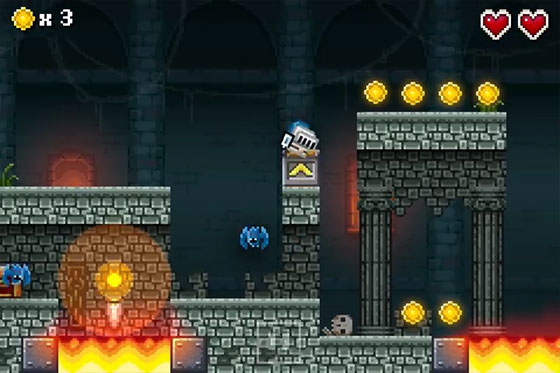 The are many light sources like torches and lava pits, and also shiny objects like coins and treasures. The way shading and use of light works gives the pixel art a more modern look, and while the characters seem to be a little blocky, they’re actually pretty detailed. The animation is simple, but enough for the movements of the knight and monsters, and they all explode when they die. The backgrounds look OK, but there’s not much variety, you have to pass 20 levels until you get to a new location and things start to change, but not by a whole lot. As an additional detail, in some levels is raining, and the water drops falling down makes the world more lively, and it looks quite nice.

To The Castle features 60 levels in 3 different locations, and while the first levels work like a tutorial jsut so you learn the controls, pretty soon the real challenge begins, and by level 15 you’ll surely be thinking on spending a diamond to skip it and see if the next one is easier. 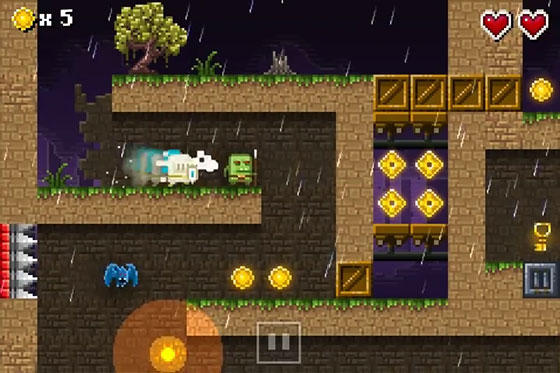 The level design is pretty good, and while you’ll see common elements repeating themselves quite a lot, the way they’re placed in each room makes every dungeon experience different, and if that wasn’t enough, there’s a level creator so any user can make and share custom creations to all players. The music is the same song loop all the game, it fits perfectly and it doesn’t become annoying, but it would’ve been nice to have another one. There aren’t much voice samples or sound effects, just what’s necesary to hear according to your actions, but having different monsters react by saying something wouldn’t hurt the overall audio experience.

To The Castle is free on Google Play and the Apple App store. You won’t see any advertising, and while you can buy coins and diamonds with real money, if you collect treasures and most coins on every level, you should be able to upgrade your knight very quickly in comparison with similar games. The full experience is available free of charge, so go for it.

To The Castle is a very enjoyable sidescroller adventure. The controls are simple and fast to learn, but the platforming becomes challenging enough even for seasoned players. You have 60 levels to beat and can try those made by the community or create your own, giving the game and endless replay value potential, and best of all, this game was worth $1.99, but now it’s free, so go check it out now. Pros Cons