Gunslugs by OrangePixel is a pixelated shooter with non-stop action that will appeal to fans of the Run N Gun Arcades of the 80’s and 90’s.

Gunslugs is a retro style sidescroller shooter/platformer where the objective of the game is to destroy enemy towers in the level and then reach the end of the stage to escape by helicopter. Swarms of enemies are trying to kill you, and you have many weapons at your disposal t ocomplete the mission. There’s the normal MachineGun, the “2-way”, two guns that let you shoot left and right at the same time, the flamethrower, the egg-launcher and the granades. 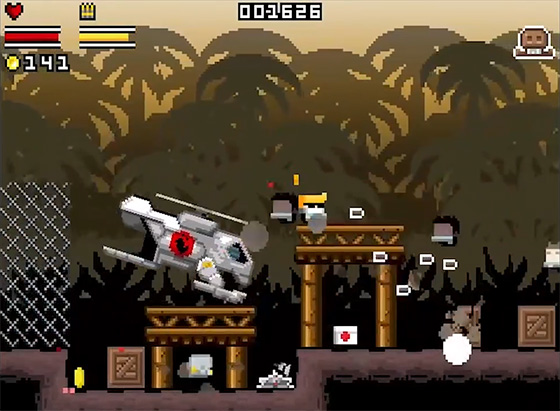 In the level you’ll encounter wooden boxes than can have Med-Kits or Ammo, and you need to keep a close eye on these in order to succeed in beating the level. You can also collect golden coins for score and there are achievements to get like completing the mission under a minute, or completing 4 stages without dying. Controls are pretty simple, you can move left and right, have a button to jump, and another one to shoot. Another ability, is that you’re able to use wooden boxes as barriers, and shoot while taking cover. Close to a box, keep running to its direction, and the character will lift the gun to shoot over it. Overall Gunslugs is a pretty simple fast-paced Run ‘n’ Gun with a Retro Arcade feel, complete with level bosses and extra objectives for those wanting more than just completing all missions.

The game goes for a 8-Bit pixelated style, and while the backgrounds and elements of the stage such as vehicles and other machines look OK, the characters are just way too blocky. 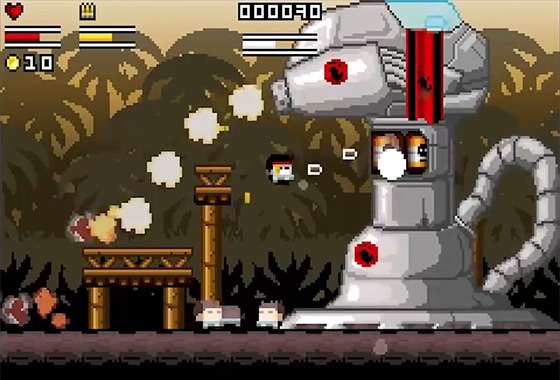 The backgrounds are made up of mostly shadows and there’s not much going on, but there’s a nice parallax scrolling effect to create the illusion of dept, and not just by moving to the sides, but the background layers also move around quite nicely while jumping around and going to high places. Animation wise, bullets, explosions, flames, enemies flying around and squared blood create mayhem on screen. About level 4 is hard to distinguish what’s going on with so much elements on the screen at the same time, and you’ll be getting damage without realizing what hit you. More than a classic arcade shooter with soldiers, sometimes it feels more like a modern Bullet-Hell on foot.

Gunslugs will appeal to fans of retro arcade war games such as ‘Contra’ or ‘Gunforce’, but it really doesn’t have as much content or charm as the popular shooter of the 90’s. Maybe the game just has too much action going on to really appreciate a play through, and even if you’re not truly alert and just moving around shooting, you’ll be winning the missions. Finding med-kits and ammo is way too easy, and the energy bar lasts quite a lot, so Gunslugs doesn’t have the same challenge (or offer as much fun) as the classic Run ‘n’ Guns with one hit deaths. 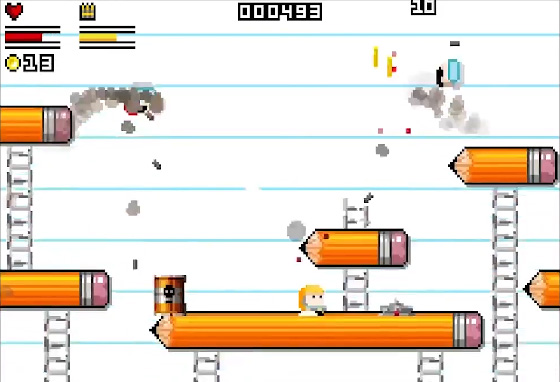 The game is packed with funny details like going into an ‘Art Stage’ with pencil platforms and a notebook background, the story dialogs can be pretty funny, and the music is made up of nice chiptune soundtracks that really fit the game, but may not be good catchy enough to consider buying the OST.

Gunslugs is valued $1.99 on both Google Play and the App Store, and there’s a free version you can download that has in game advertising. If you want a little pixelated action game, is worth it; but it may be a dollar too much for some people not really fond to the Run ‘n’ Gun genre, considering there are many great mobile games you can get for just $1. Download the free version to try it out and decide for yourself if you wish to support the Developer OrangePixel.

Gunslugs is an Action Packed sidescroller platformer perfect for those looking for a shooter with simple controls and a nice 8-Bit audiovisual style. It may not have the characteristics of a classic arcade Run ‘n’ Gun, but it’s a pretty good mobile game worth to be played by retro shooters enthusiasts. Pros Cons