Canabalt HD by Kittehface Software is a fast-paced endless runner that will test your timing and reflexes to the max. Escape the destruction of your city with just one button.

Canabalt is an endless runner where you take control of a man in a business suit running on top of buildings, and you touch the screen to make him jump. The longer you keep pressing, the higher he’ll jump. 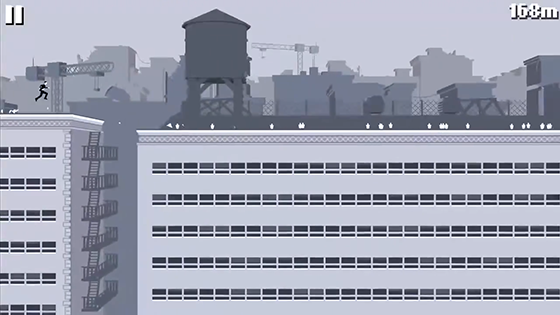 Most of the time you have to get from one building roof to another, but there are obstacles like boxes and furniture when you enter an office in the top floors, and after you advance a couple thousand meters, a plane passes by and drops a bomb which you have to avoid. Touch it and you’re dead. And when you lose, you have to start over from the beginning, but the level is random. Each playthrough is random generated, so everytime you begin you’ll play a different level. The elements repeat themselves, but are arranged in a different way so you can’t memorize what you’ll encounter, and this way you have to use your reflexes to the max. Since you jump a shorter or greater distance depending on how long you press the screen, you’ll see many gaps and platforms that you can only survive by pressing the screen just at the right time, and let go just when you need to, so timing here is crucial.

Canabalt is based on a simple web game that used pixel art graphics, and mostly used silhouettes, so here you’ll see simple 3D models in black and white and a character that doesn’t have many animations besides running, jumping and rolling on the ground when falling from a high place or crashing into a box or office chair. 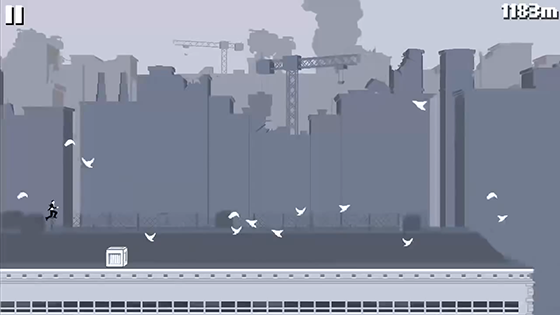 In the backgrounds you can see building machines and giant robots, and also the planes passing by that shade the screen as they fly near you at super-sonic speeds. When you jump trough a window, you can see the glass shattering with a nice effect, and also sometimes there are doves on the roof of a building and they’ll take of and fly in all directions when you run by. While not really a great visual experience, Canabalt HD simplistic graphics work great for its gameplay concept, and it’s a perfectly executed use of gray shades art. Even at high speeds, you won’t have a problem making out the platforms and obstacles, and some details in the backgrounds look quite nice, so it doesn’t seem to be the exact same setting repeating itself.

Canabalt lets you choose between the classic 2D art of the original web game, and the new 3D HD version. You can also choose from 4 songs to play while you play. There are online high score boards so you can compare your performance to players all over the world, and there’s even a 2 Player Mode. 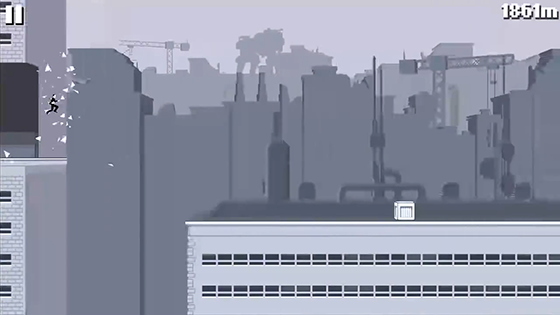 If you’re a fan of endless runners, is a nice option, you’ll test your timing and reflexes to the max, since it can go pretty fast and you’ll never know what’s next, every time you play things will be different, but for the casual player, the single tap gameplay may get boring after a while.

Value for your Money 68%

Canabalt HD is worth $2.99 on Google Play, and while it’s a nice game, at that price is only recommended for gamers looking for a fast paced infinite runner. You may want to try out the free web version first before making the purchase. At least there won’t be any in-app transactions or advertising, but there are many free runners with great quality, or some similar games worth 1 or 2 dollars.

Canabalt HD is a good single button runner with fast gameplay that gets pretty challenging quickly. In many similar games you just tap the screen to jump and it’s always the same height, but here is sensitive to the time you keep touching, and the gameplay is based on that, making it harder than your average endless runner. You don’t collect items or get power ups or anything, it’s just testing you reflexes to survive the longest distance. While it may be a little expensive, if you’re a fan of the genre, you may want to consider checking it out. Pros Cons