Puzzle x Heroes by Syntasia is a Match-3 Puzzle/RPG that perfectly combines both genres in an epic adventure with hundreds of levels offering unique challenges. It mixes up the genre by adding lots of new elements to the fomula, and it’s sure to keep puzzle fans playing for hours.

Puzzle x Heroes is a Puzzle RPG Adventure where you help magical animals restore peace to the kingdom by matching colored figures in a grid. You touch a figure and move it left, right, up or down. If you line up at least 3 figures, they’ll disappear, and if not, the figure will return to its space. Most of the time objective is to match a certain number of a given type of figure, other times is to defeat animals cursed by the Dark Shadow, and there are also stages where you have to clear spaces from Dark Clouds, Rocks, or line up exactly the color the level needs. 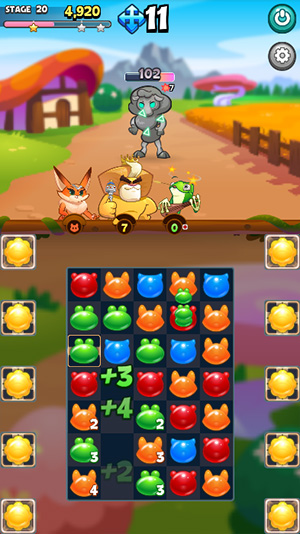 Each hero has a unique color that powers up a meter below them. When you fill it by matching it’s type of figure, they use their special ability. The red bear shoots arrows to any place you want getting rid of the figures in a 5 spaces area, the orange fox makes a vertical explosion, the green frog clears the color you choose, the blue owl lets you make 2 moves in the same turn and it doesn’t need to be a match, and the purple hippo gives you an extra turn and gets rid of all the dark clouds in the grid. A unique feature in the game is that when you make a match, the figures surrounding the cleared line will get an extra point of power, and you’ll see a number below those figures. So if you line up 3 figures worth 2 points, you give 6 power points to that color hero instead of just 3. This feature is only available for the next turn after you make a match, and the figures will lose 1 power point with each passing turn. Another feature is that when you make a 4-match, a space in that line glows, and if you make a match over it, a rainbow magic formula will explode in a vertical or horizontal direction, adding extra power points to those figures. The yellow lion special ability is to give extra power points to all the figures in the grid, but only for one turn. As you beat stages, you get rank form 1 to 3 stars, and they’re used to unlock and level up heroes. By the time you have all the heroes, you make them gain experience as you win levels, and their special ability gets stronger. For example, the bear now shoots arrows to another 2 spaces, the fox makes a longer vertical explosion, and so on. In battle levels, you attack the enemy each time you make a match with the color of a hero you have in the party, but your rival can also attack you and get a hero stunned, so when you match its color, you’re not able to attack, but start filling a “wake up” meter to get it back on the fight. Every few levels there’s a boss fight, and after you beat the final boss of an area you get to a new place in the world map to keep on with your adventure.

Puzzle x Heroes features good 2D hand-drawn graphics and animation, with some 3D elements in the world map and flashy special effects when the heroes use their abilities. The grid is dark with a checkers pattern over a blurred background, and it doesn’t look very appealing, but the characters and setting in the upper part of the screen looks quite nice. 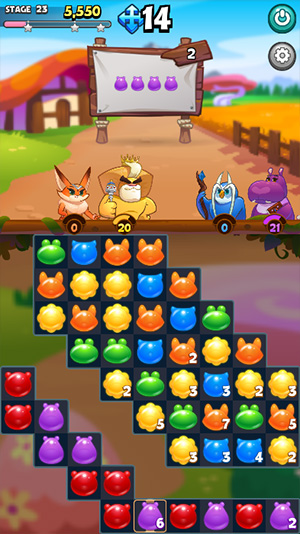 The figures disappear in nice looking explosions and there are some cool lights all over the grid when you’re making cascades and creating big lines. After a combo, a charmeleon appears with words such as “Great” and “Unbelievable” if you got a huge score. The characters are nicely animated and you can see them attack and get happy when you make a match of their color, and you can see enemies reacting to what’s going on in the fight. The animals cursed by the Dark Shadow get a grim look, and you make them back to be all colorful and friendly looking after winning the fight. Overall the visual experience Puzzle X Heroes offers is not among the best looking 2D mobile games, backgrounds could had a crisp look and maybe more animations in the characters, you can notice how their body parts move by sliding or changing size, and not new animation frames are drawn. The art and animation is good, but not really that great.

Puzzle x Heroes stands out from other games of the genre by mixing up RPG elements, power points and the way matching lines affect the figures next to them. The battles and special abilities of the animals make for a fresh gameplay and there’s enough variety in level objectives to keep you going for a long time. 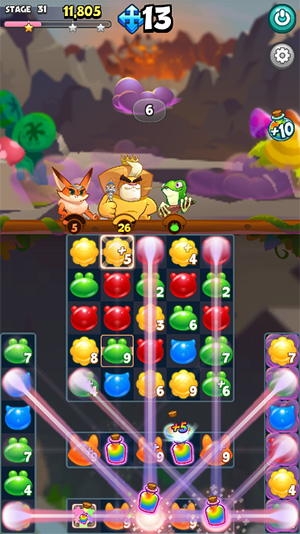 At first you just need to match certain colors, then you have to clear dark spaces or eliminate dark clouds invading the grid, or maybe break rocks by lining up figures next to them, and in later levels all those element combine for a very original and challenging puzzle experience. Some levels have the grid arranged so you can only beat it by using a certain hero special ability, and since you have limited turns, you’ll need to really think your play strategy and not just make the first possible match you see. Fans of the genre will be delighted playing the hundreds of levels the game offers.

Puzzle x Heroes ir free on Google Play and the Apple App Store. You won’t see any advertising and it’s not necessary to make in-app transactions to enjoy the full experience. It should be said that this is the kind of game where you have lives, and spend one each time you play, and the game gives you lives every 20 minutes. So if you plan on playing continuously, you’ll have to purchase blue gems, wich are currency to buy lives, level up characters quickly or get a few extra turns when you lose.

Puzzle x Heroes has adds enough new elements to the classic Match-3 formula and mix them with RPG elements to make for a great puzzle adventure experience. Each level offers a unique challenge and there are hundreds of them to keep you entertained, so gather your 6 magic animal heroes and go defeat the evil Dark Shadow to bring back peace to the kingdom. Pros Cons