Inside Out Thought Bubbles

A bubble-shooter color match puzzle game based on the newest Disney-Pixar film Inside Out.

Inside Out is a bubble-shooter, in the same style of the classic Bust-A-Move by Taito from 1994. It’s essentially a Color Match Puzzle, where the objective of the game is to put together 3 or more bubbles of the same color to make them disappear. Once all bubbles are cleared, the stage is completed, and you receive a Star Ranking depending on your score. 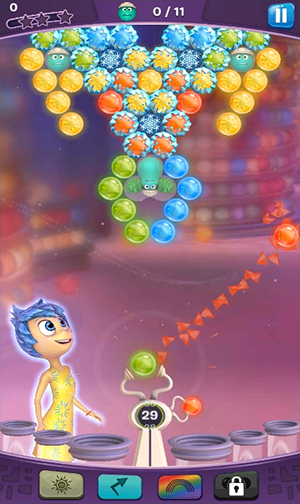 You earn points by popping bubbles, the more bubbles you pop with a single shot, the more points you get. Also, since the bubbles are all connected to each other, if you shoot a line of bubbles of one color that are holding others bellow them, they will fall down, and that will give you extra points. There are Special Missions like “Perfect Aim” where the objective is to shoot targets scattered around the stage, and there’s the ‘Rescue Mission’ where you have to free emotions trapped between bubbles. You can see the color of the bubble you’ll have after you shoot the one you have, and can switch them if you want. Also, you have power ups like a Long Arrow so you can see all he trayectory of the bubble, or a Rainbow that pops all bubbles in its surrounding area.

As you’d expect from Disney, the characters look great and are well animated. They’re not really 3D, but are pre-rendered animations shown in 2D as a sequence of pictures. This technique sometimes makes the characters stand out from the background in a way that it seems like they don’t match, but here is perfectly applied, with all elements of the game are thrown in together smoothly, creating a visual style that’s nice to look at. 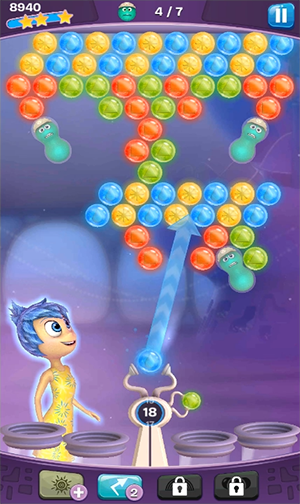 Joy is very expressive and is always moving around. She is always looking at you playing, giving advice, cheering for you and reacting to all that’s happening on screen. Everything from the menus, to the world map and backgrounds have a colorful design with added lighting and transparency effects that make for a enjoyable visual experience.

Even though Inside Out has an excellent presentation, there’s not much variety in the levels. After playing each kind of missions two or three times, it feels like playing almost the same stage over and over again. 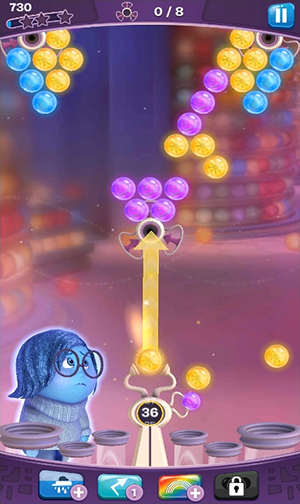 Gameplay wise it doesn’t add much to the bubble-shooter formula we’ve seen in many other Mobile Titles; but it really does a great job at adapting the Disney’s movie universe into a game ot this style, with Power Ups that fit each character and dialogs that really translate the film into videogame form. However, it should be said that Joy doesn’t have that many phrases, and listening to her gets a little annoying after a few levels.

Inside Out Thought Bubbles is free with in-app purchases. You won’t see any intrusive advertising such as banners or videos, and it doesn’t seem that you will need to buy any power ups in order to beat the game, it’s perfectly balanced and you should be able to beat every level with a 3 Stars ranking even without making use of the extra items. The game is geared towards a young audience, and it’s a game every kid that watched the movie would enjoy. For older players, it’s a good pick up and play Puzzle Bubble clone that’s recommended for those that like the genre.

Inside Out Thought Bubbles may not revolutionize the Bubble-Shooting style of gameplay, as it doesn’t improve the same formula many other mobile games share, but here is perfectly executed, and fans of the Disney movie should try it out. Best of all, it’s free. Pros Cons