Jetpack Joyride by Halfbrick is a great infinite runner where you control an office guy hero suited up with a MachineGun Jetpack taking on a one-way adventure to defeat The Evil Scientists.

In the game you take control of the hero Barry Steakfries, who is carrying a MachineGun Jetpack on his back. When you touch the screen, he’ll activate it to start shooting at the ground, getting high up as a result. You need to do this in order to avoid the dangers in the levels, like lasers and enemies. 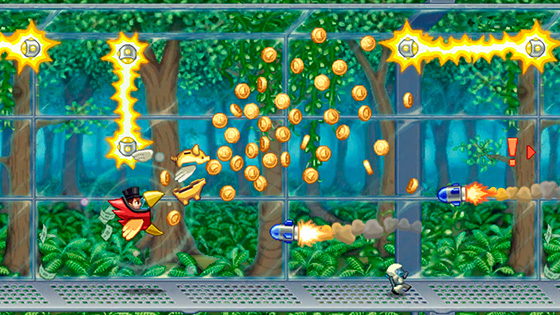 Overall it’s like a classic 2D sidescroller platformer, where you jump (or more like shoot your way up) to collect coins, items and other vehicles. You can get power ups such as an armor that allows you to take an extra hit, or a Gravity Suit that makes you stick to the ceiling, and there’s a motorcycle, that gives you a Terminator-like jacket, sunglasses and a shotgun. The game features a infinite level, but there are some extra challenges, like touching 10 people in a single run, or zig-zagging 10 lasers, which means going below one, and then passing above the next one 10 times in a row, this gives the game a lot of depth, and there are many costumes, items and extra stuff to discover.

Jetpack Joyride features great looking handrawn 2D art, with nicely animated characters and backgrounds that move in parallax scrolling, adding a 3D depth look to it. Even if the level is a laboratory, it has many different sections that add much variety to the mix. There’s the generic hallway with scientist walking around, who can get surprised, scared, jump around and die when shot, there are lasers and traps trying to stop you, and the lab has a defense system that shoots missiles at you from time to time. 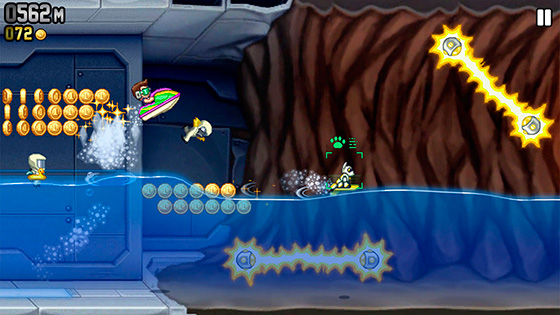 Barry can ride a variety of vehicles such as a giant robot, a plane, a speedboat that fills the stage with water, and a helicopter barrel that has him a karatana weilding a katana and cutting fruits (reference to Fruit Ninja by the game developer). There’s a lot of content and everything looks awesome. Even if you won’t try to break your record anymore, you may want to try again one more time just to see what new costume or weapon comes up and see it in action.

There are many Infinite Runners in the App Store, but very few have the level of quality of Jetpack Joyride. The gameplay is simple, just touch the screen to jump or get high into the air, and no matter the costume, that’s about it, but the variety comes from the Missions you get before each run, and when getting a longer run may not be interesting to the player anymore, completing the missions for extra content is gonna provide more entertainment for quite some more time. 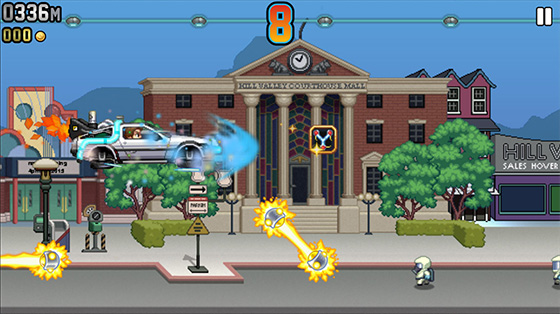 There are tons of costumes, weapons and upgrades to unlock, and there are also movies you can watch that show the story of Barry in funny situations, with the level of quality you expect from a TV Network airing Cartoons on prime time.

Jetpack Joyride is free to play, and you wil never see any advertising while playing. It does show you offers on in-game transactions from time to time, such as a package of new costumes or weapons, but nothing really annoying that breaks the game experience. In game you won’t take long to collect enough coins to unlock new features, overall, it’s one of the Free Apps with more content to offer to players without any purchase.

Jetpack Joyride is a 2D Infinite Runner that really stands out from the rest. The gameplay is simple, but the level designs, graphics and content it offers is beyond most free casual games. If you want a simple sidescroller/platformer, try it out now, it may get you hooked longer than you expect… Pros Cons