Letter Monsters by 1001 Games is a Match-3 Puzzle game that has a really interesting twist to the formula. Combine A’s to get B’s and so on until you reach the Level’s requirement, which it won’t be easy by the ‘F’ monster…

Letter Monsters is a Match-3 puzzle game with an interesting twist. Here you control a cubic monsters with a letter, such as ‘A’, and move it around the grid by sliding your finger across the screen. The monster goes all the way in that direction, and stops until it reaches the end of the grid or crashes into another monster. If you combine it with two other monsters of the same letter, the 3 become one monster of the next letter, so three ‘A’ monsters become one ‘B’. The objective of every level is to get a high letter monster, such a D. 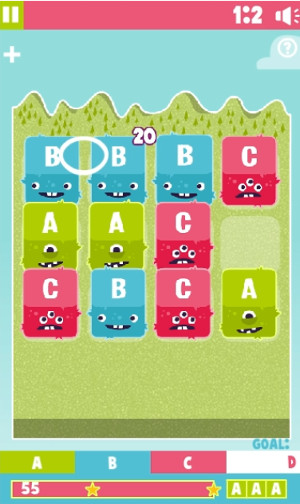 To finish a turn, you either combine a monster, or when reaching an edge, try moving it in that direction one more time, so it becomes stuck in place. Then, a new monster will appear for you to move. There’s an item that let’s you move a monster in any space of the grid you want, just touch a monster and drag it where you want it. And there’s another item that let’s you swap places with another monster. There are Special Monsters such as the ‘Minion’, a rock that’s just an obstacle getting in your way, that can be destroyed with a Hammer Item, or with another Special Minion Eating Monster. Finally, there’s a ‘Joker’ black monster, that can take the color (and letter) of any monster it crashes into. Overall Letter Monsters is a very original take on the combine 3 formula, very easy to control and it gets pretty challenging by the time you’re looking into getting a ‘F’ Monster.

Letter Monsters looks nice and colorful, there are many different worlds, all with a nice design, and the monsters themselves look quite nice, like out of an educational cartoon for children. 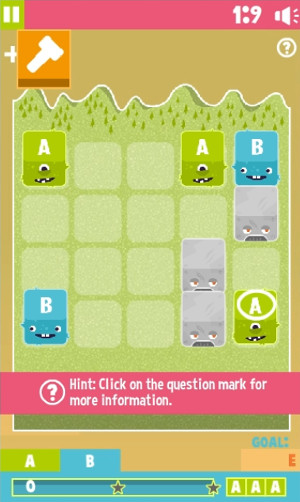 It’s a nice detail that each monster has its number of eyes according to its letter. So an A monster has 1 eye, a B has 2 eyes, a C has 3, and so on. They have very little animation, just some size changing and bouncing around when moving, but still, the amount of motion you see when sliding the monsters and combining them is just right.

Letter Monsters is all about the gameplay, it controls perfectly and even when combining monsters with diagonal motions you’ll get exactly what you want. The amount of items and special monsters is just right to keep the game fresh, and there are over 60 levels to keep you busy. 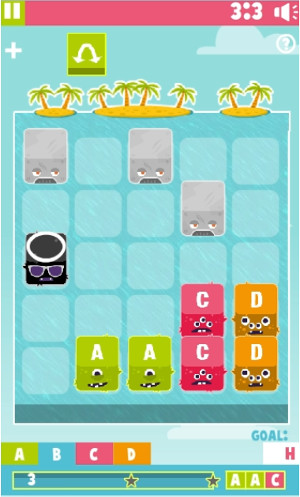 The sound effects and monster voices are nice, and add to the overall experience, but there’s only one song playing through the whole game. It would been nice to have different music in every World, but really, that’s just a minor complain.

Letter Monsters is free to download in the App Store and Google Play, and there’s even a web version to try out in your PC, so if you enjoy Match-3 Puzzles download it right now, before you know it, you’ll be trying to get the “G” Monster, which it isn’t easy at all.

Letter Monsters is a nice option if you’re looking for a unique puzzle. There are many mobile Match-3 games where you only drag your finger across the figures, or Tetris Attack clones, so this game is a breath of fresh air in the genre, wrap up in a nice colorful presentation. Best of all, it’s free. Pros Cons