The only thing you need to do is to bump two balls. Will you be able to clear these simple-looking but actually difficult stages? This is a brain-training game that everyone from children to grown-ups will be able to enjoy!

Brain Dots is a puzzle game where you have a stage with 2 balls, and you objective is to make them touch each other. They could be suspended in the air, and once you draw one line, they’ll fall to the platform below, so you create a ramp or something to move on of them to the other. 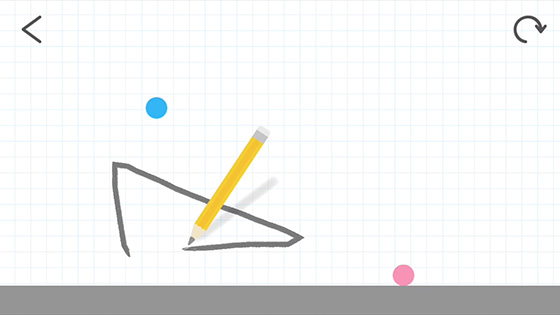 Sometimes the balls are already static on platforms, and you must draw something to fall on one ball and make it move. Other times there aren’t any platforms, but there are floating squares where you have to drawn lines and make the balls fall in there. If one of the balls goes beyond the screen, you have to redo the level. Once you make the first line, you can draw as many as you want. Just touch the screen, and move your finger around, release so the line is made, and it will be affected by gravity once you you do. Sometimes you have to draw several lines to have stuff push the balls close to each other. At first you can draw anywhere you want, but later on some areas will be cross and you won’t be able to make the lines appear there, but you can make it fall on there after you draw it. The puzzles start pretty easy, and can be solve with just a line or figure; but after a while you’ll have to really think what shapes to draw, and maybe change the pencil por a brush or crayon or something else to make heavier objects. If you’re having a hard time, you can ask for a “hint”, so a transparent animation shows you what to draw to beat a given level.

Brain Dots features very simple graphics. You just have a blue ball, a red one, and gray platforms over a white background with light blue grid, to make it look like a notebook. 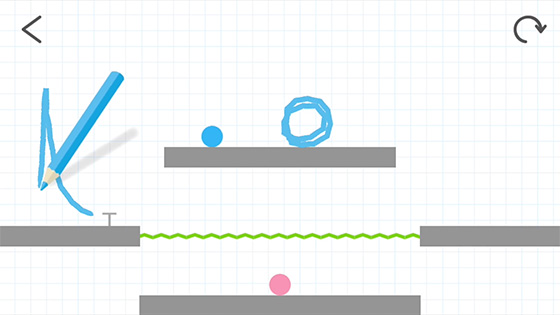 At first you draw dark gray lines, like a common pencil, but after beating levels, you gain coins to buy different types of pencils, with thicker lines and other colors. Sometimes they do help you to solve puzzles, and other times it seems like just an aesthetic change. Given the style of gameplay, the visual design works just fine; but there’s nothing really noteworthy; you’ll likely remember this game because a puzzle make you think hard and fail many times, not because pretty stuff shown on the screen.

Brain Dots has endless possibilities. Besides the dozens of stages the game offers, you could create your own on check out what other users made. The game is quite simple, but the thinking involved can be quite complex, and it’s certainly pretty addictive if you’re into brain puzzles and similar games that became popular when the Nintendo DS came around. 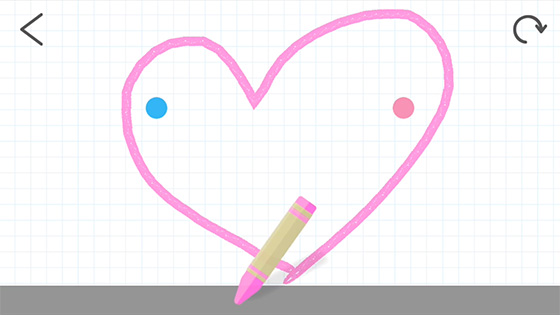 There are 25 varieties of pens of different colors and sizes, and it should be noted that the game has been translated to 15 languages. Another nice feature is that you can record your gameplay and show to your frinds how you beat a level. There are many ways to win the same stage, and with the level maker, you’ll notice that by minimum modifications, the challenge can be quite different; so this is a title that won’t get old too soon for those who enjoy thinking games.

Brain Dots is free on Google Play and the Apple App Store. You’ll see some banner advertising when you lose, and even when you win, every 3 levels or so. When you beat a stage and gets coins, a little button will show up saying “I want more coins” that makes you watch a video ad to double up the coins collected, and you can use them to buy other pencils. There’s a premium no-ads version for 99 cents, and if you enjoy the title, it seems like a good deal.

Brain Dots has simple touch gameplay, but complex thinking once you finish the tutorial levels and start getting to the real challenge. The visuals are kinf of minimalistic, and the same song plays through the entire game, but the puzzles are so good, that people that enjoy thinking games will certainly have a good time; and you can make your own stages, or download user created ones. It could improve in some aspects, but the gameplay is great and quite addictive, so if you want to try out a puzzle that won’t have you putting together 3 figures of the same kind, try this one out. Pros Cons