Super Phantom Cat is a retro-inspired 2D platformer that pays homage to 8- and 16-bit classics games. In Super Phantom Cat, players take on the role of Chemist White and embark on an action-packed journey through the Phantom World.

Super Phantom Cat is a 2D sidescroller platformer inspired by 8-Bit and 16-bit classics. You take control of White, a cat that goes on an adventure to Phantom World, and the objective is to reach the end of each level while collecting data shards, stars and “sprites” that give super powers to their holder. 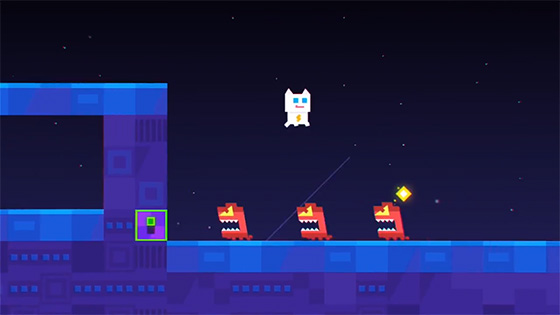 In the bottom left part of the screen, there are arrows that you press to walk left or right, and in the bottom right side, there’s a button to jump. Once you collect a sprite, it will give you a new ability, and a new button will appear next to the jump arrow. You may be able to shoot balls of energy, or perform a slam by falling down hard, being able to break blocks and eliminate enemies. Just like in Mario Bros, White can break brick blocks with its head when jumping, and get rid of an enemy by falling down on its head. The are some “?” blocks that may activate something in the level, like make many data shards appear, which are small yellow ray icons that you use to get new characters, or maybe a platform will move, or a wall blocking your way will disappear. The overall gameplay is slow paced, but there are many secrets to find. While exploring the levels, you’ll notice that there are many fake walls, so there’s a lot of exploration to do. Besides just jumping around, sometimes you need to use springboards to get higher, or cannons that you can get into, that can shoot you to get to hard to reach areas. On each level, there are 3 golden stars hidden, that you can collect as an extra challenge. They don’t give you data shards or anything, they work as a ranking when you beat the stage, and you can go back to play it if you miss one. You may end up finding a whole new area to explore, so there’s replay value if you intend to get 100% of the items in the game.

Super Phantom Cat features very colorful 2D graphics, but using many geometric shapes. You can notice that White is made out of squares and triangles, and everything in the game just looks “blocky”. 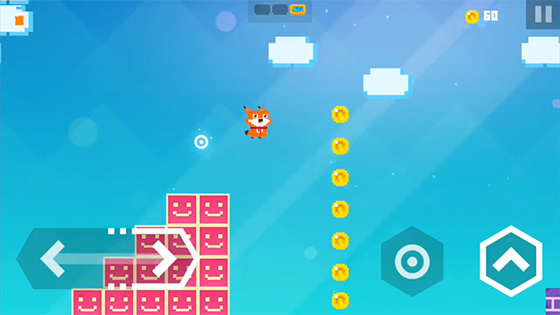 Some characters are more detailed than others, but the pixel art is there. The animation looks good, but in White, you can notice that its limbs only rotate in the hips and shoulder, and it looks kind of weird, like the way you move a doll. Still, characters are expressive and react to what’s happening. In the cut-scenes, you can clearly notice how White is feeling just by seeing its face. The backgrounds are colorful, and while the platforms you walk on are mostly made out of squares, they have nice looking patterns with different shades. The sky also has gradient colors, and you can notice sun rays in day levels, or stars sparkling in the distance in levels that take place at night.

Super Phantom Cat is a great mobile platformer. It has all the elements that made Sega and Nintendo console games of the genre such classics. There are dozens of levels to play, and bonus challenges. And when you play a level at night, you can unlock new areas, so there’s a huge world to explore. 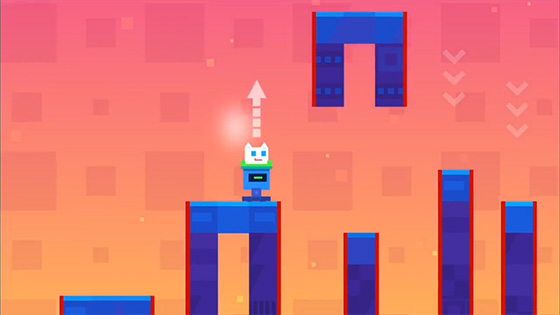 At first, the game will begin very easy, and if you’re an old school platformer player, it may seem boring, but once you get power ups and start finding secrets, you’ll notice how deep the game is. And the developers are still adding new features, like Discorun Mode, a runner similar to Geometry Dash, where you’ll text your reflexes to the max.

Super Phantom Cat is free to download in Google Play, but it has video ads, and just as you launch the game, you’ll get a commercial before being able to tap on the menu, which is quite intrusive. The Apple App Store version is worth $1.99, and considering all the content, it’s a reasonable price; but it’s better to try the free version so you can decide after playing for a while.

Super Phantom Cat is a good platforming with many power ups, items, characters and secrets to find. If you’re already tired of all the infinite runners or games where your only interaction is tapping the screen to jump or something, here’s a console quality adventure you can play on the go. Pros Cons