Taps is a simple puzzle game with minimalistic design but it will sure put your brain to work. Add and substract numbers on the grid to match the one above you. Sounds easy, but this game can get quite hardcore for puzzle players looking for the new challenge to take on.

Taps is a math puzzle game about adding and substracting numbers on a grid, if features a simple visual presentation, but a very complex mind challenge once you get on the advance levels. 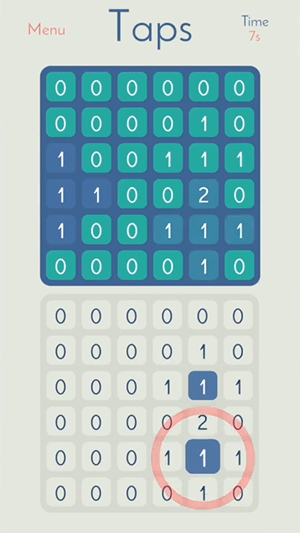 The objective is simple, you have to match the grid on the bottom of the screen with the one on top. When you tap on a zero,  that space and the ones up, down, left and right from it will add a 1. Tap on a 1 to return back to 0. But when you tap on a 0 that has a 1 next to it, that 1 will become a 2, since 4 spaces next to a 0 get +1 when you tap it. It may start out easy, and you can solve a puzzle level with just 3 taps; but as you advance, the grids become more complex, and you’ll have to really take time to think in order to pass on to the next level. There are more game modes for advanced players, like one where the +1 is added to zeros next to the space you tap in diagonal. And also a mode where you can substract, and having -1 in the grid will really make things more difficult. You can take as much time as you like, but the quicker you solve a puzzle, the higher you’ll be on the online leaderboards.

Taps features a minimalistic visual style, with just the grids and numbers over a blank background. There aren’t any fancy special effects or anything really worthwhile to see. 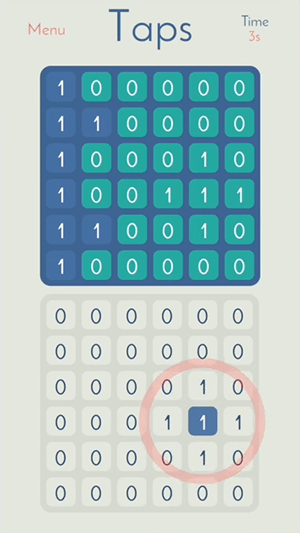 The visual design works fine give the type of game, but you’ll probably soon forget how it looked like after uninstalling it and moving to something else. The focus of this game is being simple in presentation, but complex in the core mind challenging gameplay, so it’s acceptable that it looks like the way it does.

Taps offers 4 gameplay styles, and there are 400 levels in total to keep exercising your brain to the max. Just these levels should keep you busy for quite a while, but the community can customize their own, so there’s potential for unlimited levels. 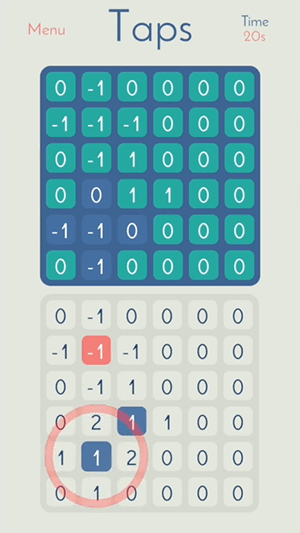 The music is pretty relaxing, and it sure helps you keep focus while you play. In the online leaderboards you can compare your times with users all over the world, or you can turn off the timer so you don’t feel pressured.

You can get Taps on the Apple App Store for $0.99, or you can play it for free on Google Play, with video ads showing up every few minutes. For it’s simplicity, iOS players may not want to spend a dollar on it, but any math puzzle fan looking for a high menthal challenge should definitely check out the Android version.

Taps is kinda like Sudoku when it first became available for a mobile device, users can take it out and play a couple of levels whenever they have free time. For people that enjoy playing little brain challenges in short bursts, is a recommended choice. Just try out the Android version first, before deciding on buying the premium for iOS.