Touch the left or right side of the screen to move your bird and avoid the falling boxes! Collect candies and unlock new birds.

Run Bird Run is a casual game where you take control of a bird in a field, that must avoid wooden boxes falling from above. Just touch the screen on the left or right side to move in that direction, and if you bump into a box, the bird will run on its side until it reaches the top and continue running. 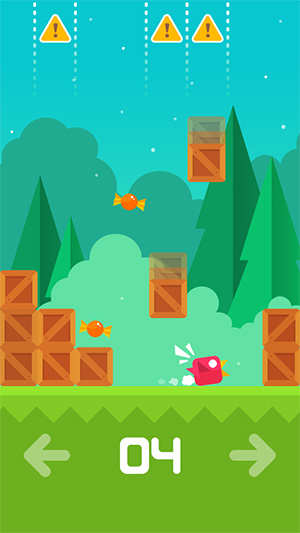 In the top part of the screen you’ll see a “Danger” sign appear, and a moment later the box will come down. Everytime a box lands, you get one point. You’re objective is to survive as long as you can to get the highest score possible. You can also see candy falling down, they’re currency to buy new characters to play with and other stages, so keep an eye out for them, when a box lands on them, you lose your chance to collect it. At first, a feww boxes fall down slowly, but as time passes, many boxes will start falling down at the same time, and pretty quickly, so work on your reflexes. You lose the level when a box lands on you, in which case you’ll have to start over.

Run Bird Run features 2D graphics that have big areas of a single color, the common style seen in flash baes web games a few years ago. The birds have a simple squarish design, but are nicely animated, and they have funny reactions, you can see how they run all afraid of the boxes falling down. 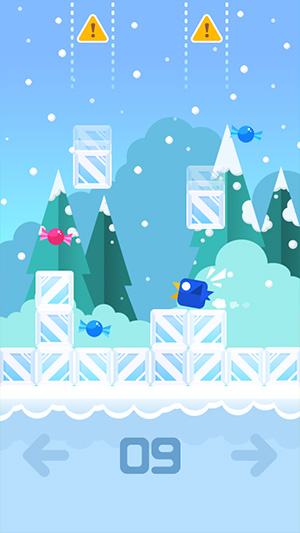 The stages feature gradient colors in the sky, clouds and other elements of the scenery. Overall the graphics aren’t complex at all, but they fit the casual simple gameplay. While not very eye catchy, the visuals just work their purpose on this game, and there are many characters and different scenearios to unlock, and some added effects like dust clouds forming where the bird runs, and snow falling down on the winter forest.

While the main objective of Run Bird Run is just to move left or right and trying to beat your previous record, there are 100 unique challenges that give the game more replay value. 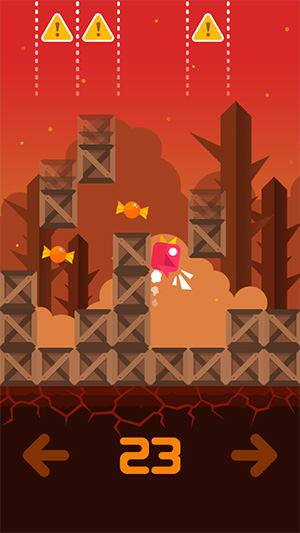 The are achievements like “Collect 10 candies”, “Run Over 150 Boxes” or “Get 100 Points in one Play”, which add to the overall experience, and there are some birds you can only unlock by beating challenges. There’s also a Prize Wheel you can spin every day to get unique rewards, like 4 birds you can only get by this minigame. If you want to unlock everything the game has to offer, you’ll be collecting candy for quite a while, but since the game is more on the casual side, most players may not be interested in going at it more than a few minutes and then move to something else.

Run Bird Run is free on Google Play and the Apple App Store. When you lose you’ll see banner advertising that takes over the whole screen, like is common to see in this kind of games. Every play can last a couple of minutes, so it won’t be annoying unless you’re bad at the game. You can buy candy to buy characters and levels, and there’s also the ad-free version, which has a reasonable price for those who really enjoy the title.

Run Bird Run is meant to be played by casual players that just want to kill a a couple of minutes each time. It’s not as addictive as endless runners or jumpers, since the gameplay doesn’t have much interaction on the players part and the background is pretty static, only changes a little after you’re on top of dozens of boxes, and by the time you don’t last long. It’s recommendable for users looking for a simple game to try their reflexes for a few minutes, but that’s it. Check it out if you enjoyed casual flash made web games about 10 years ago. Pros Cons