Play the EPIC retro RPG runner – Buff Knight! Developed by a 1 man studio, this pixel graphic game has stormed the top charts in Korea. Now it’s your turn! Slay the Dragon! Save the Princess!

Buff Knight! is a simple 2D sidecroller RPG where the hero just walks to the right automatically fighting monsters and breaking jars and barrels to collect gold, gain experience and save the kingdom from evil. 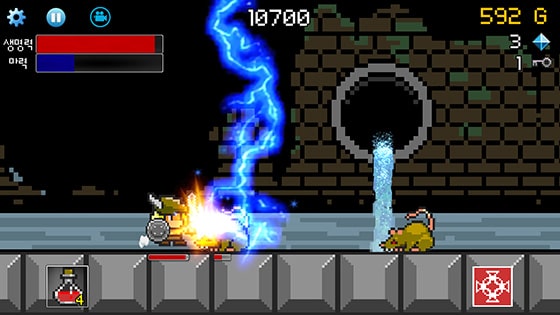 The hero is always walking to the right, and when he encounters an enemy, he will hit it with his sword, taking away some of it Hit Points until it’s defeated; but you will also get a little HP taken away from you everytime you touch a monster. In the bottom left corner of the screen, there’s a button with a Red Potion you can press as long as you have some left to regain your health. In the bottom right corner there’s an attack button that let’s you summon a magic thunder, and it will hit the next enemy on the screen. If there are many creatures close together, they will all be affected. Of course, you need Magic Points to summon a Raiden Attack, but this regenerate over time as you keep walking. If you need to fill up your MP quickly, drink a blue potion by pressing the blue icon next to the red potion. You can also interact with the level by tapping barrels and jard before the hero walks into them and breaks them, and by opening treasure chests you encounter along the way. But in order to open them them, you’ll need a key that some powerful enemies left behind sometimes after you defeat them. Everyone in a while a fairy will come flying your way, if you tap her, she may leave behind gold, gems, keys or potions, and best of all, you can tap her as many times as you can as long as she’s on the screen. When you die, you can go to the shop and use your gems to level up your attacks, health, critical hit chance or magical power, as well as buying a new stronger sword and more powerful armor to boost your attack and defense before going to the dungeons one more time.

Buff Knight! features 8-Bit low resolution graphics, that may remind you of the times of the Sega Master System and the early days of the (before it had the Super CD add-on), since it seems to be based in games like Zelda 2 and Wonder Boy in Monster World. 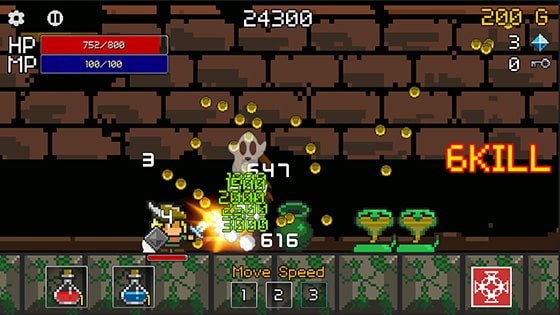 The animation is minimal, in fact the hero doesn’t even have different movement, the same pixelated image just translates along the stage, and the enemies only have a little motion like the head up and down or moving limbs side to side. Also, the backgrounds look way too blocky. In contrast to the characters, the hit sparks for when you hit an enemy are actually tiny explosions with alpha transparency, and the thunders are also very cool looking with a modern electric effect. Overall, the visual design seems to be something out of a personal computer game of the late 80’s. At least when you buy a new sword or piece of armor, the hero’s look changes a little bit, but not with all items, and sometimes it’s just a change in color.

There are many idle RPGs available for mobile gamers, but in most of them the players have very limited interaction with the action. In Buff Knight! at least you have to be aware of your HP and MP bars, and when is the best time to use magic, as well as interacting with a few elements on stage. 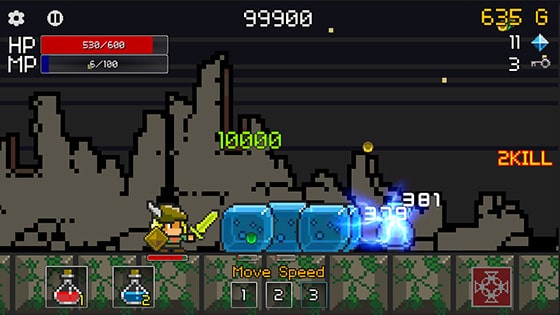 The level up system is a little deeper than the regular RPG, since you can buy helmet, boots, chest guard, shield and even the clothes beneath separately, and also you can “enchant” each item with magic power for a playthrough in order to be ultra strong in a single dungeon crawling. Even though the places you visit look very low resolution, sometimes there are nice details such as water flowing from fountains, a river, or you’ll find yourself in a field while raining or snowing. It’s also worth mentioning that the game is translated to a dozen languages, and if features 8-Bit chiptune original music.

Buff Knight! is free on Google Play and the Apple App Store. As expected, you will see some advertising when you die, but with less than a dollar, you can buy the ads free version, which also unlocks the Move Speed x3 and gives you additional Experience Points for every enemy slayed. Given how addictive this RPG can become, for 99 cents it’s a very reasonable buy.

Buff Knight! may look way too retro at first sight to get the attention of a modern user, but once you get into it, you’ll find out it’s strangely addictive, and even if it seems it has no end, you’ll be playing again and again in order to level up, buy the most powerful items and save the princess and your kingdom. Check it out if even if you haven’t tried an idle RPG before. Pros Cons