Spike City is a fun arcade style puzzle platformer that has an endless mode where your objective is to go up as high as possible, or play levels where you must reach the exit and collect purple coins in rooms full of traps. 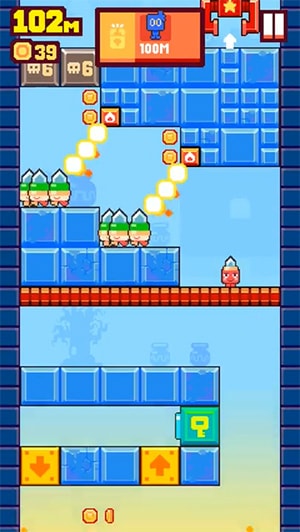 The controls are simple, you move the spiky character up, down, left and right by swipping your finger on the screen in the direction you want to go, and then you’ll launch the hero that way. If you let go of the screen after you swipe, it will not attack to surfaces, but if you keep touching the screen with your finger after making the motion, the spike guy will get nailed to the wall until you let go. There are enemies that you can defeat if you slice ’em with the blade on top of your head, just be careful not to touch their spikes directly. There are also razor sharp saws and other traps on the floor, ceiling and walls that can take you out, and if you don’t hurry up going to the upper floors, there’s lava coming from the ground below, and once it catches you, you’ll have to start over. Along the way you’ll find yellow blocks with an arrow on them, which means they can only flip if you touch them by traveling in that direction. Also, there are green key blocks that work as switches, and they open doors and panels if you stick on them for a few seconds. As you advance, you’ll also find portals that take you to different places in the level, and cranes that carry you to another platformer. All these elements create a very complex puzzle platformer, and when going at high speed, it can get quite addictive just trying to get a little higher.

Spike City features a bright and colorful 2D pixel art style with cute bouncy animation, Nitrome’s signature style; but besides the normal shading of the different elements on screen, when the lava gets close, you see everything getting a yellow-orange tone as the magma begins to fill the screen. 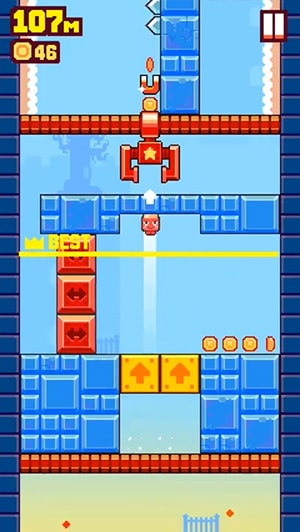 The main hero can rotate and get squishy when getting ready to jump, it stretches when you launch it, and it gets splashed when it hits its target. It also leave a white trail so you can notice its speed. There aren’t that many special effects here, but the ones you can notice like the fire sparks coming out of the lava or the screen shaking effects when you defeat enemies are nice to look at. It’s worth mentioning that the spiky character can be customized with a different body, facial expressions and “hats”, since you can replace the blade on top of its head with lots of funny stuff, such as a “Love & Peace” hand sign.

Spike City has more replay value than similar titles such as infinite jumpers since it features a level mode where the objective is to reach the exit door, but even those add an extra challenge by having 3 hard to get coins scattered in the room you play to make things more interesting. 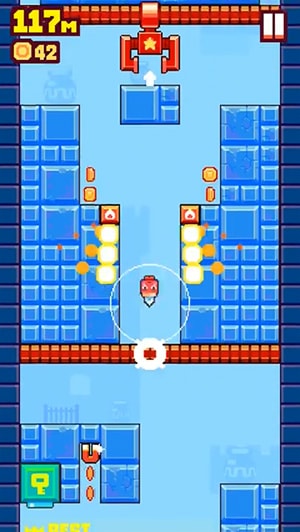 Once you reach a certain distance in endless mode, you may feel like you’re just repeating the same stage patterns, but since it always changes and you have to think fast before the magma gets to you, this game gives you a feeling of thrill that very few titles can. The sound and music is OK, it fits the game and all, but nothing you’d like to hear when you’re not playing. The customize your character is packed with lots of content, and you’ll probably be trying to get as many coins as you can in order to buy everything to create the spiky hero you want.

Value for your Money 91%

Spike City is free on iTunes, with a Google Play version coming soon. You will see some advertising when you lose, which is to be expected if you stay in the free version. You can remove the ads for a couple of dollars, which sounds kinda reasonable if you really enjoy it and wish to collect everything this game offers.

Spike City is not a totally original formula, but the graphics and level design are top quality and the characters have a certain “personality” that makes this title stand out from similar games. Check it out if you want an endless “jumper” adventure or want to try out all the puzzle platformer levels. Pros Cons