Diamond Dash by Wooga is a fast-paced Match-3 puzzle with simple controls but lots of action! Compete to match as many gems as you can in 60 seconds, use magic abilities and level up to get huge score bonuses. Win great prizes and medals in our weekly arcade competitions and crush your friends on the leaderboards.

Diamond Dash is a very fast-paced puzzle game where you tap groups of gems of the same color to make them disappear, and use bombs and magical items to create explotions so you get rid of lots of jewels and earn lots of points, all in 1 minute plays. 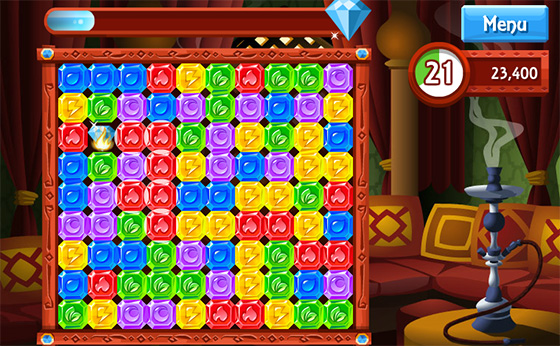 You start out with a grid full of gems, and you need to tap on areas where at least 3 gems of the same type are together. When you make a match, a “diamond meter” in the upper part of the screen will begin to fill up,  when you complete it, you get a fire diamond in the grid, and when you tap on it, the timer stops, and a special meteor falls from above, taking out a column, and the bottom row. The diamond meter slowly depletes with time, so you need to make matches fast, and if you tap on a single gem, or only a couple of them together, you take away a portion of the bar, so better only tap on matches. When you make a match, you hear a bell sound, and if you’re quick making the next match, the bell sound gets higher pitched. If you keep on tapping on matching gems fast, you’ll eventually get to the “fire grid” state, where a matching group explodes taking away the surrounding gems. This state lasts for a while even if you miss and tap non-matching gems. Before starting a game, you can select items to help you in your quest for the highest score. There are bombs that appear in a group of gems and explode taking out a big area, hourglass icons that add 2 seconds on the timer when you tap on them, black holes that absorb all gems of a certain color, and paint bombs that make a huge area of the grid to be of the same type of gem, for easy points. And if you’re connected to facebook, there’s a special diamond bomb that appears and when you tap on it, it makes 5 groups of matching gems explode. These items appear at random, and you need to tap them quickly before they vanish. You earn golden coins by playing to buy items, or can use a spinning wheel between games to win lives, coins, gold ingots or magic items. You level up as you play and earn points, and every few levels you unlock new features, like new bombs to use when playing.

Diamond Dash features nice 2D hand-drawn art. The gems look shiny and there are some good looking effects for explosions, fire and light flashes. The meteor diamond makes the whole screen go dark before it comes and hit the grid, and it’s a cool animation, but after seeing a few times it loses its “awesome” looking factor. 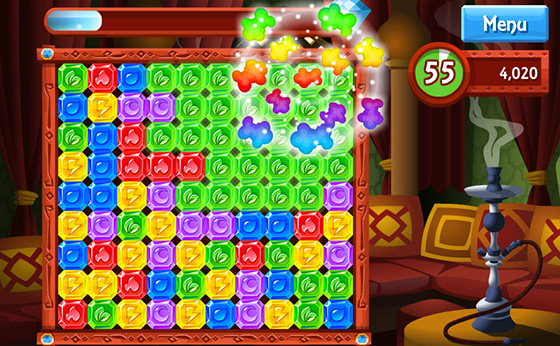 The game’s mascot is a panda in an arab attire, and looks OK, but it isn’t animated and just appears between plays giving a few tips. The background is a static picture, with a painting style, but nothing too fancy. Overall, the visuals are above average, and they work for this casual gameplay, but there are puzzles that look awesome in comparison, and after a while, Diamond Dash is not really a memorable experience.

Diamond Dash gameplay is very fast-paced and it has many special items to use for variety. Being able to level up to unlock new features is a nice touch, and while there are match-3 puzzles with similar game mechanics, few get close to the quick and addictive nature of these 1-minute plays. 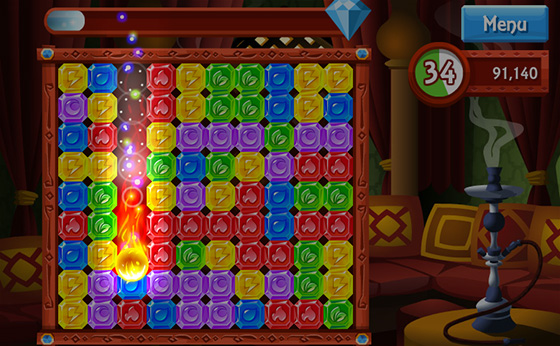 Many apps of this style have you spending money to buy boosters and in-game’s currency, but here you can win items and golden coins just by playing the main mode or spinning the bonucs wheel between rounds. At the beginning you won’t see much action, but by leveling up and unlocking new magical items, you’ll see the screen full of lighting and explosions, and you’re score increasing like crazy compared to your previous tries. While the main mode doesn’t change much, getting a new item after gaining a couple of levels spices things up, and you may try again one more time just to see if you can increase your score for at least a thousand points.

Diamond Dash is an addictive game that casual players and hardcore puzzle fans can try out. If you’re tired of slow match-3 puzzles where you just move a block left or right one space in the grid and would like to try an ultra-fast action oriented game, definetely check this one out, there are not many games in the genre with this quick style, and you may have a hard time putting it down. Pros Cons