Time waits for no one except you: the Time Surfer. Surf across the galaxy & dive into the waves. Rewind time to fix your mistakes & outrun the end of the universe. Dream beyond the stars my intergalactic child.

Time Surfer is Runner game where you take control of an intergalactic child riding a surf board across the universe. The overall objective of the game is just to reach the longest distance you can, avoiding spikes, voids, asteroids and landing on aliens heads to eliminate them, while collecting gems to buy new costumes and familiars that give him new powers. 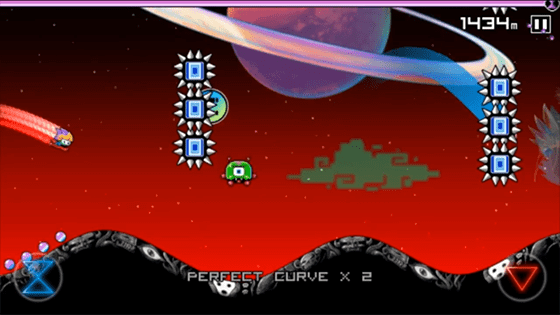 You control the Time Surfer by pressing the red Down Arrow on the bottom right part of the screen. When you press it, he will duck down, which will make him speed up when sliding down a hill, release the button just before starting going up on the hill to release your build up speed and perform a high long jump. While in the air, pressing the button will make you fall down fast. As you slide down perfectly over the hills, you will get faster and faster, and at times you will find an orange path with black arrows over a hill, that will increase your speed greatly and make you jump extreme distances. Also, if you land on an alien, asteroid or star icon, you will perform a high jump while rotating. Along the way you’ll encounter dangers such aliens going up and down. If you touch one without falling on its head, it’ll make you lose speed and fall down, but you won’t lose your life. But don’t get careless, a supernova explosion is just behind you, so if you aren’t fast enough, you’ll get caught in the heatwave and die. The other ways to die are touching spike balls and falling inside a pit between hills. Fortunately, you have the power to reverse time, just press the hourglass icon in the bottom left part of the screen to go back a few seconds to try and do something different, avoiding your death. In the top part of the screen is the Time Bar that shows how many seconds you can go back. When you use your reverse powers, you can restore the bar by collecting purple cakes that are scattered along the way, floating in the universe. Fianlly, there are some power ups you can collect, like a red ball with 2 red forward arrows, that increase your speed x2, and a hourglass icon that replenishes a big chunck of your time bar.

Time Surfer features 2D Pixel Art, but it  is quite smooth, and given teh fast paced gameplay once you biuld up speed, it looks great on a tablet with HD display. 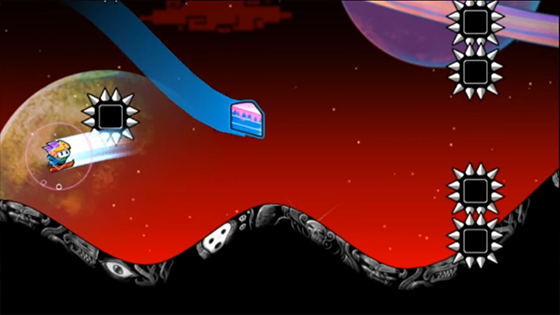 The camera zooms in and out on some segments, usually there’s a wide angle when you’re going fast, so you can notice the obstacles ahead and react on time with the scrolling moving quickly; and when you’re starting out, you’ll be closer to the camera, and will be able to notice the details on the designs, like the alien heads and weird images on the hills. Your character leaves a blue trail as it surfs, that turns red when he ducks down, and when going really fast, he even leaves violet shadow images of himself. And some items like the cake piece also leave trails. When you reverse time, you can notice the blue trail also changing to the opposite direction. As you go along the way, you’ll find yourself in new areas with different scenery. At first it’ll be dark and you’ll see planets and stars in the background, then you’ll find yourself in a red planet with mountains and craters behind you, and maybe you can even get inside a space ship. The transition between different stages is hardly noticeable, as everything seems to be continuous, and the gameplay is never interrumped. Until you die, of course.

Time Surfer is an endless runner, and as you advance and get longer distances, you’ll find yourself in different scenarios, which give it a lot of variety. But besides the main adventure, there’s a Xmas theme course, a halloween one, and a more techno neon looking one. 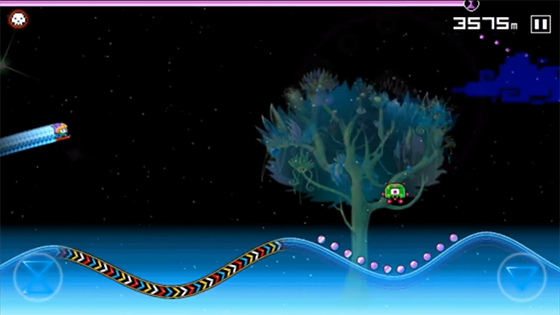 To make the main mode more entertaining, there are side missions you can complete, like stomping on aliens 3 times in a row, don’t touch any spike balls, reach a certain distance, collect 100 gems and so on. These extra objectives give more variety to the game, and are a good way to get more gems to buy familiars, costumes and characters to select. There are lots of characters to play with, but also companions for your trip, that give you a bonus power like letting you survive a death by spikes, or giving you a speed boost at the beginning. Besides, the costumes you wear also add an effect, such as magnetic field that attracts gems. Most runners repeat the same elements in the screen way too often, but here it’ll take a while to get in a familiar place once again, and with so many unlockables, you’re sure to get busy for a while.

Time Surfer is free on Google Play. You won’t see any advertising, but you can buy gems if you wish to. With normal gameplay, it shouldn’t take long before you can aford the costume or familiar you want, so it doesn’t seem like you’re gonna have to purchase anything unless you want to support the developers. The Apple App Store version costs just 99 cents, and for less than a dollar, it’s worth it.

Time Surfer has a very original gameplay dynamic, not commonly seen in a runner title. If you enjoy games in the genre, but want to try something that breaks the mold and tries something different, check it out. Lots of planets to surf on, costumes, characters, extra missions and bonus content to keep you entertained are waiting for you here. Check it out. Pros Cons