Surf as far as you can. Through the oceans, caves, snowy hills and deserts full of sand. Check how fast you can swipe up and down, try the double swiping with both your hands to reach the high score. Remember – in Surfingers the waves are under your control.

Surfingers is and endless runner with a twist, instead of controlling the game’s character, you move the waves he’s surfing up and down so he can keep on riding the ocean… That’s it, until you get to the beach and start surfing on sand, and then reach a snowy mountain and start skiing on snow. 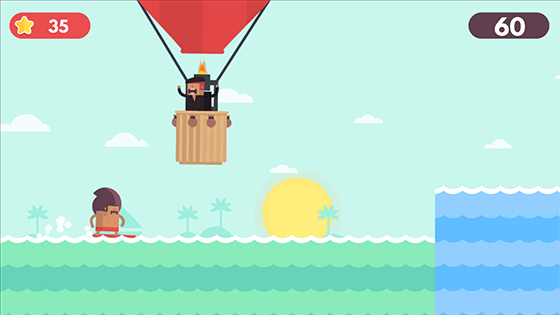 At the start of the game, you’ll be advancing slowly, and your interaction with the game will be moving the green tide you’re surfing up and down a little bit by swiping your finger. You can move the tide as many times as you can as long as your on it, but once you build up speed, it’ll be better to just level yourself wit the next tide in order to survive. If you make a double swipe using both your thumbs, you’ll move the tide twice as much in a single motion. At first you’ll only need to connect the tides, by moving the one your on to the same level as the next one; but then obstacles will start appearing, such as rocks you’ll have to avoid going up, or balloons you’ll have to duck under. In the top right corner you’ll see your score. You get one point for each new green area you reach. And besides just advancing as far as you can, you an also collect starts floating along the way, which you can use to buy new surfers to play with. Also, a times you’ll see many stars close together, and if you can get 5 in a row, you’ll create a “combo”, which gives you 10 extra points in the score. Besides buying them with stars, you unlock new surfers by reaching a certain score in a single play. You lose when you don’t connect two tides together or hit an obstacle. Then you can watch a video ad to continue, or choose to start over. In the next playthrough, you’ll see a mark at the distance you lost the last time, and if you beat your game’s record, you’ll hear a tune and see a “Top Distance” sign.

Surfingers features a cartoony hand-drawn 2D art style that doesn’t take itself too seriously. Surfers look like doodles in a coloring book and objects in the background have a simple design, so you only focus on what’s ahead of you. 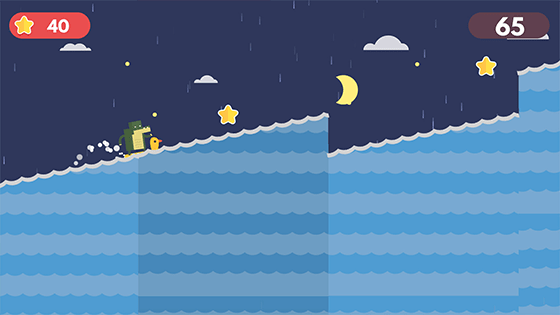 The surfers animation is very limited, since they only move their arms a little bit, and don’t even have a reaction when they hit an obstacle, you only see the same frame fall over. Still, there are a few nice effects such as crabs climbing rocks in the sea, the guy yelling at you from the balloon, and in some area it even rains. The colors are soft and the text you see has cute round letters and numbers, so everything is kept casual and relaxed.

Surfingers certainly changes the formula of the average casual “runner”, since once you’re playing, moving the tides instead of the surfer creates a different experience that’s entertaining for a while, and once you enter new, different areas, you’ll play again and again in order to explore a little more. 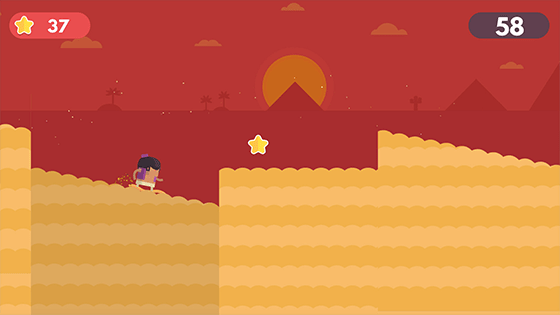 There are over 25 surfers to unlock, and many different areas where to take your surf board. And there’s even a split screen multiplayer move for the owners of an Apple TV. The music is nice, it has that “90’s California Beach” Movie vibe, and while you don’t hear many sound effects, the SFX for crashing and getting a new record are well done and fit the theme of the game.

Surfingers is free on Google Play and the Apple App Store. You will see a banner or video ad everytime you lose, and that can be quite often depending on the player. You can buy the Ads-Free version for 99 cents, which may seem acceptable for people that get really addicted to it; but the average user, may just get to the third area and leave it at that.

Surfingers is a fun casual title with cartoony graphics that sets itself appart from your average runner platformer. It can get a little repetitive since you have to start over everytime, and it lacks stuff like power ups and extra challenges like the most popular games in the genre, but still, it’s a good experience if you’re looking for something that tries to be funny and original. Pros Cons