Tired of typical shooters and hundreds of boring titles? Check out this sequel of a great arcade game with cool 3D graphics! Brutal upgradable cars, big guns and daredevil speed will steer you through places that are chock-a-block with zombies… It’s going to be a really exhilarating fight that no one will want to miss!

In Zombie Derby II you get behind the wheels of an armoder vehicle equipped with a gun and turbo boost, and get on the road to eliminate the undead, running over them or shooting them from your car. 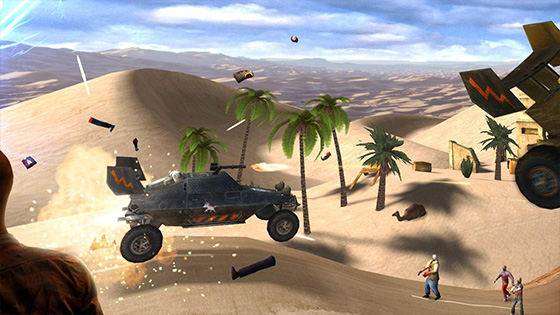 You have touch controls to accelerate on the bottom right part of the screen. Press on the pedal to advance, and to use the turbo boost press on the button above it. Keep in mind that you have limited gas and nitro, so you better release your finger from the accelerator from time to time. Along the way you’ll find ramps and stuff that’ll make you jump in the air, and you’ll also find yourself in very steep down hill road, you can stop pressing the buttons for a while then. To shoot your weapon, just tap on the left bottom crosshair icon, and you’ll fire one bullet. You can kill a single zombie, or destroy oil barrels and other explosive obstacles you’ll encounter in your way. You can’t destroy boxes by shooting them, you’ll have to crash into them, which will make you lose some speed, just use turbo boost for a couple of seconds to keep going. When you jump in the air, you can tilt your device to the sides to rotate your vehicle, or can go to the options menu and choose to do that with two arrow icons that will appear below the crosshair icon. The overall objective of the game is to get to the end of each level, and you get points for killing zombies and doing tricks such as flipping your car while in the air and landing on the walkers. When you finish a level, or destroy your car, you’ll get money to upgrade your vehicle. You can get a bigger gas tank, better tires so you can go up hills better, more bullet capacity for your gun, a nice front defense to just run into the undead and obstacles without a problem, and more nitro for the turbo boost. After finishing a level, you’ll unlock a new vehicle to ride, like a tank, armored truck or racing car. Besides the main levels, there’s an optional daily level you can play, but not all cars you unlock are available in the daily levels. Each level has its own setting, like a city, a desert, the beach, and so on. Zombies are everywhere, so beware…

Zombie Derby II features nice looking 3D graphics. The cars look pretty good, and there are a lot of them for you to ride on. Zombies aren’t exactly alike, so there’s some variety there, even though there’s a yellow runner on fire and a crawling undead guy in a suit that you always see performing the same action, the walkers are different from each other. 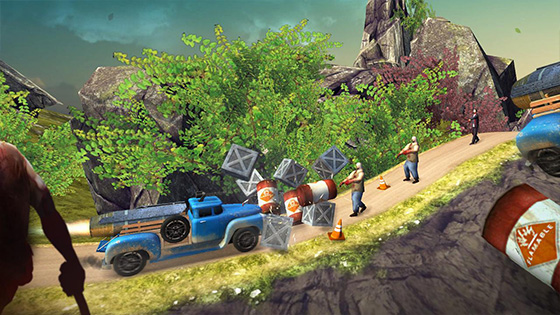 Special effects like bullets, turbo and explosions are fun to watch, and the scenarios look pretty detailed. You can even read signs on the barrels and see individual leaves on plants. The gameplay runs smoothly, but if the game is getting slow on your device, you can change the graphic quality settings on the options menu.

Zombie Derby II has simple controls, blasting the living dead is always fun, and being able to go at fast speed and jump several feet in the air just makes the experience more enjoyable. 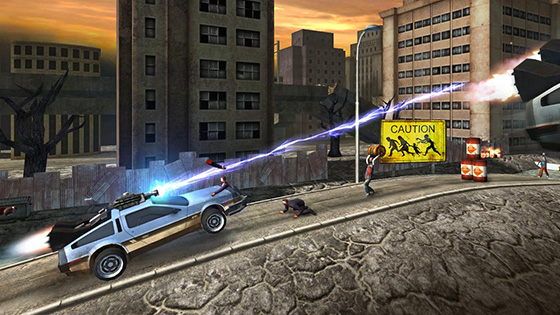 There’s variety in the cars, weapons and backgrounds, but gameplay wise, after a few levels, you may feel like things aren’t much different, like if the obstacles and zombie positions just get arranged and you’re in the same stage over and over again. Still, the game is loaded with content, and the core gameplay dynamic is pretty fun, it’s just that casual players not really into the “runner” or racing genre may not enjoy it that much.

Zombie Derby II is free on Google Play. After you lose a few times, you’ll see a video ad that you can skip, or choose to watch a 30 seconds ad completely to win more money to upgrade your vehicle, but everytime you use that option, you have to wait for a while to do it again. The ads here don’t interfere with the gameplay, and it’s actually one of the few games where you can upgrade your ride to the max really quickly just by playing; unlike some puzzles and RPGs where it takes forever… You can also upgrade to the Ad Free version for just a couple of dollars, or get 1000 in game coins at very reasonable price.

Zombie Derby II is an entertaining racing/shooting game. Running into walkers, shooting explosive barrels and jumping mines and huge obtacles is very satisfying, and it’s not just about getting to the end of the level, you can earn points (and in-game money) by playing with style. There’s a lot o content to discover and enough variety in the levels to keep coming back for more; and best of all, it’s free, so check it out on your android device. Pros Cons