“METAL SLUG X” is an updated version of “METAL SLUG 2” with a lot of new elements for even more fun and excitement! Bosses and other enemy characters await you at different points on the battlefield, so that even players who have perfected the previous installment will enjoy this new and improved game map!

Metal Slug X is an updated edition of Metal Slug 2, a Run N Gun arcade title originally released on the Neo-Geo in the late 90’s. The objective in each stage is to go to the right until you reach the end, defeat the level boss, and then move on to the next stage until you reach the Final Boss. Good ol’ Coin-Op fun. 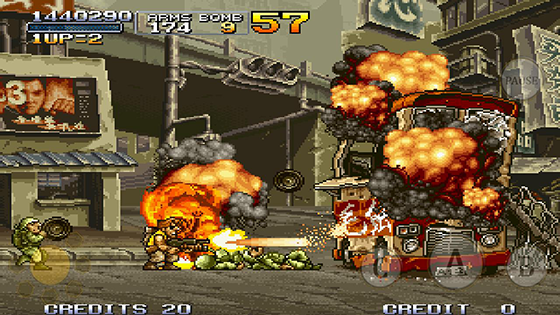 In the bottom left corner there’s a virtual joystick, which you use to go left, right, aim up or crouch. And you can walk slowly while crouching down. At the right there are the action buttons, A to shoot, B to jump and C to throw granades. You can aim to the ground while jumping by moving the joystick down in the air. You start out with a handgun that has infinite bullets, and along the way you collect more weapons, like machine guns and rocket launchers. They have limited ammo, and when you run out you go back to using the pistol. By shooting enemies and elements in the levels, you can get items for score, weapons, granades or vehicles to jump on. There are many prisoners of war that you save in the stages, they usually drop valuable items that give you lots of points, or powerful weapons. There’s even one POW that helps you by shooting enemies with blue explosive energy balls; and he’ll aid you in your quest until you lose a life. You start out with two lives, and can earn more by getting a points. When you run out of lives, you’ll get a “Continue?” screen, and you can move on on your quest. You start out with 20 credits, if you run out, you can’t continue anymore, and it’ll be Game Over. 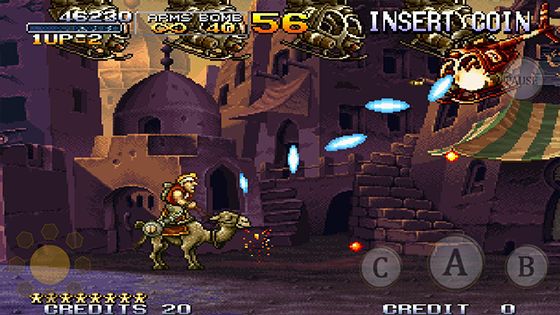 Compared with Metal Slug 2, there are more elements to see here. First, the stages, that can happen at different times of the day, like morning, sunset and at night. There are more enemy types and bosses, and the stages have new sections and hidden spots for you to discover. The vehicles and bosses are huge, they are made out of different moving parts and look impressive. A new feature is that you can find stronger versions of weapons, that have a wider and longer blast. Like the Super Heavy Machine gun, that has bigger bullets, the Big Laser that now has a very wide ray, and the improved rocket launcher that shoots out huge missiles. Another detail is that if you collect many food items, you’re character will become fat, and that will change the weapons, like the machine gun bullets will become round, and instead of a knife for close attacks, you’ll use a large fork. Given that this game came out about 20 years ago, the resolution is a little low, speacially compared to modern 2D games in HD that really look like an animated movie feature; but that’s compensated with great animation and fun to watch cartoony design.

If you already own Metal Slug 2, it’s worth to have this X version too. While the level layout is mostly the same, there are enough changes and improvements to make it a whole new experience. 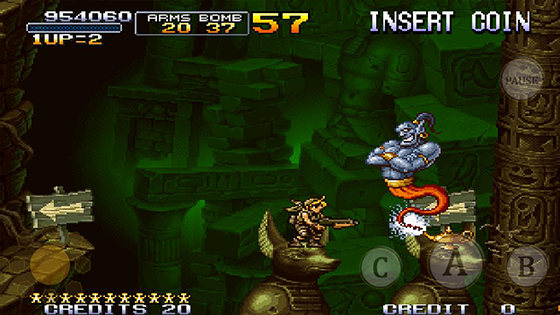 While you have more powerful weapons, there are new tougher enemies and mid-bosses, and a few sections in the level with harder platforms to overcome, making the game more challenging. The music has been re-arranged or remixed, and there are also more voices for the heroes and the villain army. The announcer that says “Mission Start”, “Mission Complete” and all that, is also different and it sounds better here. This mobile version doesn’t add much options over the original arcade version of the game, there’s mission select, some extra achievements, multiplayer so you can play with a friend, and a world rank, so you know how do you compare in score with players everywhere.

Metal Slug X is worth $2.99 on Google Play and the Apple App Store. Given the quality of the game, it’s a very reasonable price. Back in the time of its original release, you’ll have to pay 25 cents to get a credit, and you’d surely spend at least $5 if you intended to beat this game. Now you can have it everywhere you go for the price of a bag of chips.

Metal Slug X is recommended if you enjoy classic shooters and pixel art. If you used to play it on the arcades, now it’s your chance to have it on your mobile device; if you’re new to the series, maybe you’ll want to start out by buying the first Metal Slug, and then 2 or X, they’re all great Run N Guns that never stop giving hours of fun. Pros Cons