Travel to crazy worlds to beat minigolf courses in this puzzle putting adventure by Nitrome.

Nano Golf is a 2D top-view minigolf title, and just like the real game, here you have to get the ball inside the hole within a certain number of strokes to move to the next course, and the less times you hit the ball to accomplish your objective, the better you are. 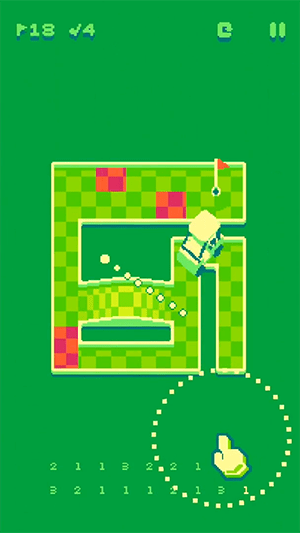 When you start a level, just touch the screen wherever you want, and a circle will appear around your index, then drag your finger in the opposite direction you want to shoot it. You will see a dotted line appear to show you the trajectory, and you can control the strenght of the shot by dragging you finger closer to the edge of the circle, to make the ball bounce on the walls. At first, you will only have to worry about getting the to the hole by hitting a wall a couple of times, but later on real obstacles will appear, such as golf carts, sand traps, water ponds and the like. There are also moving belts on the floor that will apply a force to the ball when it rolls over them, so you move adjust your shot strenght accordingly. To make things more interesting, there are other puzzle elements such as locked doors, which can be opened by hitting a wall with a special color, or passing the over over a switch. In later levels, there are also waves of energy that teleport the ball to another section of the course, and even cloning machines that create another ball in a different part of the level. If you make at least a par, you will move to the next stage, and if you lose, you will have to start over. If you believe that you can’t make a par because you made a wrong shot in the first 2 hits, you can always start over by pressing the “refresh” icon in the top right part of the screen.

Nano Golf features bright colored pixel art graphics, the visual style that Nitrome is known for, that said, most of the time you’re seeing just green and there’s little animation going on, so it is not as eye-catchy as other titles by the company. 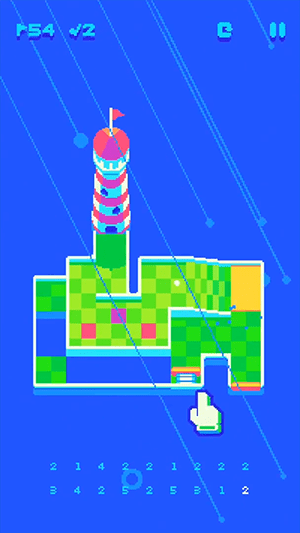 There are a few nice efects such as rain and water rising, and the ball leaves a motion blur when you hit it hard, but there are games with a similar style that are actually in 3D and are more memorable in the visual department, such as Vista Golf. You can notice the platforms terrain, which part is a lower floor, which section is on a slope and there are even some 3D elements like the golf cart and a few buildings, but overall this graphics are just “good”, not truly a great job like you’ve come to expect from this developer.

Nano Golf has over unique 70 courses, each one with a different puzzle challenge for you to overcome, with lots of obstables, deadly traps and there are even boss fights. 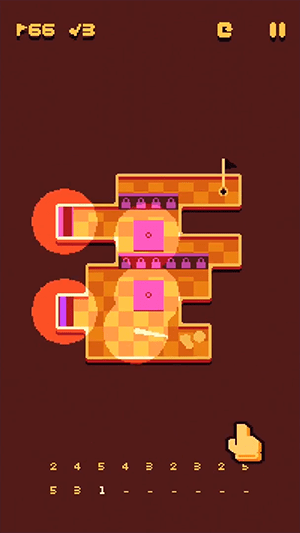 The music is made of a chiptune soundtrack, which really sets the mood of the game, and the sound effects are OK, and are just right to set the “retro feel” this title looks for. It would’ve been nice to see characters around the stages, maybe plants or some other elements instead of a single color background below the platforms, but gameplay wise, this game delivers what a minigolf player is looking for.

Value for your Money 94%

Nano Golf is free on Google Play and the Apple App Store. You will see an banner ad after you fail a course a few times, and given the time it can take you to get a bogey, that can be quite often. There is an ads-free version you can get if you really enjoy the game, and for its quality, its a fair price if you wish to support the devs.

Nano Golf is a good option if you enjoyed MonoGolf but want a little more complexity in the puzzle aspect of the game. The visual presentation could be a little better, but the simple controls and challenging gameplay will certainly be welcomed by players of 2D golf games. Check it out if you want to have a good minigolf title in your pocket. Pros Cons