So for those of you who love mechanized warfare games, it doesn’t get much better than Walking War Robots by Pixonic LLC. The focus of this game is a 6 vs 6 battle with you and a bunch of random players. You are stocked with crazy heavy artillery for the battle, and there is a wide variety of different maps to play too.

Thanks to the popularity of the game it normally doesn’t take long to be matched with a full battlefield of players, and then you are ready to get going. Opponent mechs are colored red and your teammates are blue, which makes life easy! All movement is controlled by the virtual joystick which works quite well, and you will have the hang of it in no time. It is mainly a base capture model, although there are missions too, and a levelling structure is incorporated. The response is quite good as long as you have a decent internet connection. 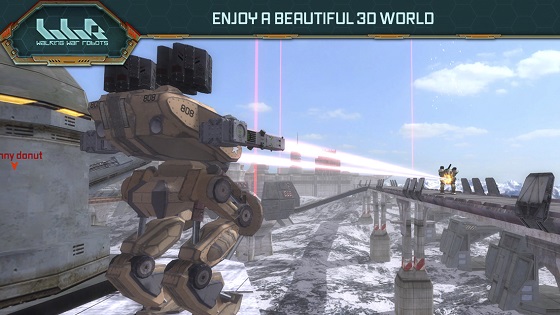 Just take a look at the gameplay trailer below and you will be impressed with the graphics. The maps have a high level of detail and the mechs look very cool. We didn’t notice many rendering flaws in our trial, and the game didn’t look too much like an animated cartoon, which some developers do these days.

This is a quality game by a quality developer, of course no bugs and a well thought out interaction with the player. Thanks to this the game won’t get too repetitive or boring. There is in game cash (as always!) which you can buy with real money or grind for. The cash will buy you advanced gear and specs.

Well you can play for free which is always a big positive, but if you want the best gear then the in-app purchases can get a bit pricey. You can grind though!

Overall it really is a great game, recent updates have fixed minor bugs and they continue to add more battlefields to keep it fresh. Walking War Robots has a solid mix of quality gameplay and graphics which isn’t at all easy to get right in most cases. Pros Cons