Tap to jump and avoid traps while climbing the challenging levels of the Magic Mansion, in this retro pocket-sized platform game by Nitrome and Sets And Settings. Pure 1-bit retro arcade experience!

Magic Mansion is an endless platformer where you enter an old building and must avoid obstacles such as spikes on the floor, ghosts, bats and enchanted cannons shooting at you. 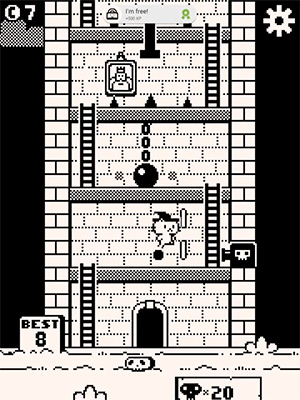 You’re character is always walking, and you just tap on the screen to jump. When you bump into the wall or a block obstacle, you change direction. You can also collect coins that you use to unlock new characters, and some blocks are breakeable and have a coin inside. Everytime you go up to a new floor, you win one more point in the score counter on top, the overall objective of the game is to go up as far as you can, until you lose and have to start over. When you die, you can exchange 25 coins to continue or watch a video ad.

Magic Mansion it totally monochromatic, which means there’s only black and white. Unlike Tiny Dangerous Dungeons that tries to emulate the GameBoy look with differents shades of gray, here you only see black pixel art over a white background, like in a very old PC game. 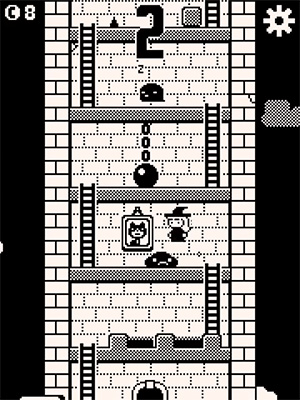 While the game features a single color 8-bit graphic style, it’s well animated and the characters still have a certain charm to them, which is Nitrome’s peculiar style. The enemies have different animations when they’re idle and when you get to their floor and have to attack you, and their expression changes when you pass them over. They’re all bouncy and you can even see some effects like the smoke cloud the cannon leaves when shooting, and dust going up when the metal ball trap falls down on the floor. Overall, the game manages to look good in this “1-bit style” as Nitrome calls it in the app description, but the total lack of color may not appeal to a broad audience.

Magic Mansion has an infinite random generated level. As you go up, the level layout won’t always be the same, but after playing for a while, you’ll see the sale elements repeating themselves, and it’ll feel like you’re just playing the same over and over again. 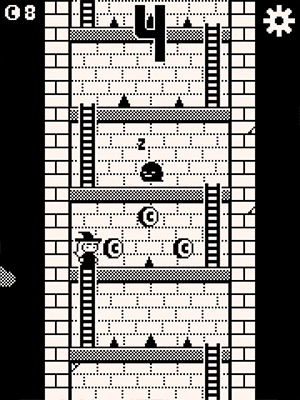 There are some achievements like getting to floor 10 without continuing or bumping into 3 blocks in one play, but they’re not extra objectives that give you unlockables or special abilities like in other infinite runners or endless jumpers. At least there are many characters to unlock, but they feel just the same way, and only have a simple walking animation all the time. The audio work is too simple and while the graphics have an early 80’s game look that may appeal to old school gamers, some players may find it boring.

Magic Mansion is free on Google Play and the Apple App Store. You’ll see a banner advertising after losing about 3 or 4 times in a row, and you’ll only see a video ad if you decide to continue without exchanging coins. There’s an Ad-Free version that you can get for a couple of dollars, that may seem like too much considering that better full color games such as Goblin Sword are worth that.

Magic Mansion is a simple title that you’ll probably play for a few minutes, unlock a couple of characters and then move on to something with color, or maybe at least with 4 shades of green like other GameBoy based titles. As it is now, there’s just not much to do, and the presentation may only be of the taste of a handful of players. You can try it out for free if you want, but very few people may feel like buying the ad-free version. Pros Cons