Hocus Puzzle by Bigpoint is ideal for fans of mix and match casual puzzle games. Get ready for a magic adventure where the witches bring the environment to life!

Hocus Puzzle is a Magical Adventure where the good witch Serena is trying to defeat the evil that’s drained the magical river dry. To do so, she goes into stages where you have a grid with potiosn and spells, and Serena is standing in a space. You touch Serena to begin a match, and drag your finger into a potion of one color, and then continue by connecting potions of the same color. Once you release your finger from the screen, Serena will go to that space taking the potion with her, and then more will come down from the top of the screen. 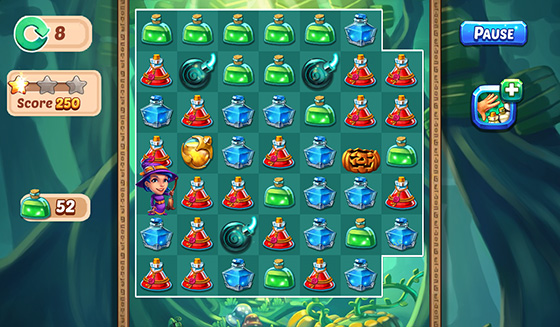 If you make a line taking 5 potions, you’ll create a Special Golden spell, which can connect to any color, and gives you 500 points when you take it. If you connect at least 10 potions, you get a bomb, that when lined up, it explodes taking out the potions in spaces next to it. There are also Special Star spells worth 2000 points, and like the golden spell and the bomb, can connect to any color potion. The game objectives are different depending on the stage. At first you’ll have to reach a certain score, then you need to collect a certain number of a specific potion or spell. Later on you’ll encounter obstacles such as black magic seals over spaces, that you need to break by lining up potions over them. To make things more difficult, you’ll face enemies such as halloween pumpkins and evil witches, that will take away points or add potions on your counter so you take longer in beating the level, so do your best no to stand next to them. You can’t eliminate enemies, but if you make a bomb explode next to them, they’ll get stunned for a couple of turns. There’s also a shield spell that protects you from them for 2 turns when you line it up. There’s also a booster that stun all enemies on the grid. Another booster takes all the potions of a certain color in the grid, and there’s one you can choose before starting the level that gives you 5 extra turns. In the world map every few levels you’ll find a wise magic owl that gives you rewards according to your achivements, such as collecting 200 potions or reaching a 100,000 points. Rewards can be boosters or costume piece, so you can change Serena’s witch costume and have her wear something else. There’s also a lottery where you can win gems, the game’s currency, and other items.

Hocus Puzzle features great 2D animation with lots of special effects. Characters are expressive and always moving, and the fact that Serena can change costumes each with excellent animation is something to applaud. And the world map is huge and detailed, and you see all sorts of light and magical effects that look pretty cool. 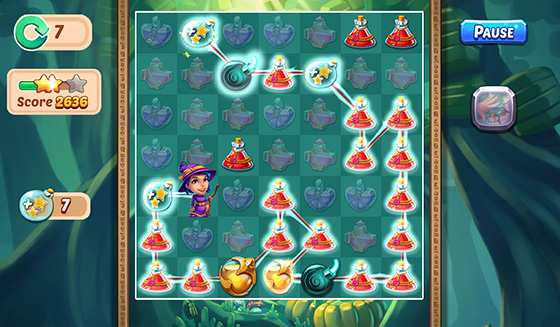 When you’re drawing a line, the potions will glow, and the rest of the space will become transparent, and when you release your finger, the way Serena moves and everything disappears in a mystical flash of light is an excellent visual experience. The special effects in the game are of the highest quality and while the background isn’t animated, it’s painting style fits the game perfectly and no complains here, it doesn’t need to have motion with all the action going on in the grid.

Hocus Puzzle is similar in gameplay to other Connect Colors puzzles such as Jelly Splash, but it has a Story, a Magical setting, charismatic characters, great graphics and animation and you can even collect and change costumes. 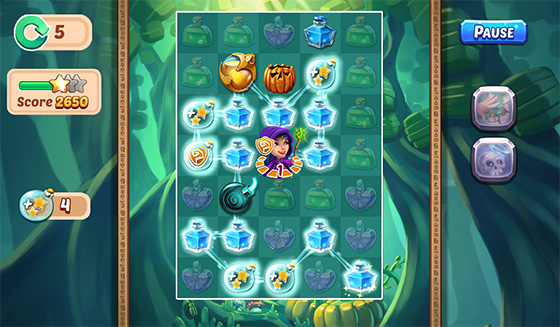 Since you have to start drawing the line with Serena, and be careful of landing next to enemies in the grid, the gameplay adds something new to the genre, and while it doesn’t feel that different from other popular games of the same genre, it has enough elements to stand out and be a totally recommended option for fans of line up puzzles.

Hocus Puzzle is free on Google Play and the Apple App Store, but there are in-app transactions. The game currency are gems, when you lose a stage, you can continue by trading 30 of them, and by just playing, you can beat 20 levels and only get about 15… If you’re a good player, you won’t need to buy gems or extra lives, but you may feel like giving a dollar to the developers given the high quality of the game and the hours of fun it may give you.

Hocus Puzzle is one of the best Connect Colors in Line games available now. It certainly stands out from to other similar titles by having enemies in the grid and the way you have a character to move and perform magic makes for a different gameplay experience. Overall it’s a high quality puzzle that should keep you playing for hours. Pros Cons