Happy Dash by ShiningPixel Games is a funny endless platformer that has a lot to offer. If you cherish a lovely pixel art style, mashed up with modern mobile features like achievements, leader boards and simple, intuitive touch controls, check it out.

Happy Dash is an infinite runner where you take control of a mushroom with legs that walks, jumps and flies from left to right as long as it can to survive, all while breaking blocks, eliminating enemies and collecting power ups that make it leave a rainbow trail or get wings. 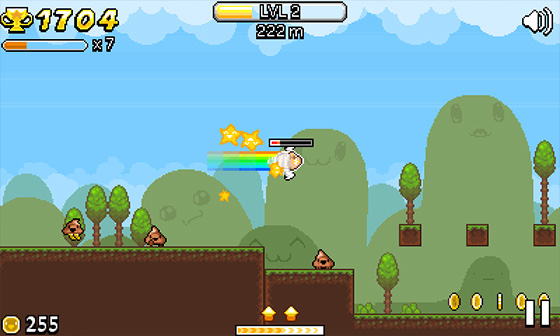 Just tap to jump, and tap again for a mid-air jump. You can land on enemies to take them out as in classic sidescroller platformers from the 90s, or you can perform the “Happy Dash” to tackle them and get rid of them. You can also jump to break blocks and collect coins on the way, that you can use in the game store to buy new abilities and upgrades, like a longer dash or a magnet to attract coins. You can also buy new characters. There’s a combo system that begins when you take down an enemy, on the upper left corner a bar will fill with a score multiplier, and will be depleting all the time, once you hit another enemy, it will fill up and add x 1 to the multiplier. As long as  you keep hitting enemies before the bar depletes, you’ll keep on the combo to boost up your score. Happy Dash is an infinite runner, with random generated levels, but there are common elements that appear as you level up, like easy enemies and simple platforms when you’re just starting out, and by level 7 huge chains with a giant ball at the end will be rotating here and there trying to stop you. Right in the top of the screen, you can see the level bar, which fills up when you get golden coins, break blocks or eliminate enemies. Everytime you fill it, you get to the next level, which means harder obstacles and more enemies will start appearing. Every 5 levels the background will change, you’ll begin in a forest and then you’ll find yourself in some caves, with new monsters to avoid.

Happy Dash features a pixel art style like the one found in 2D console platform games of the 90’s. Everything looks nice and colorful, the characters are nicely animated and look like a japanese cartoon for children, and the backgrounds have cute cat faces and weird expressions creating a world that’s fun to look at. 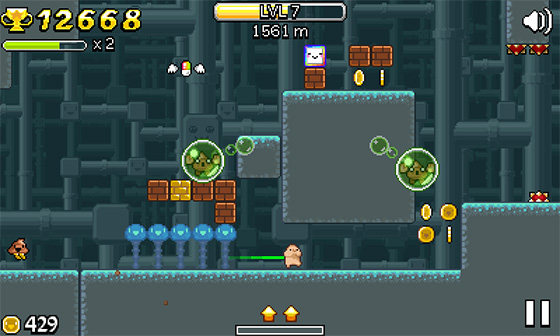 The backgrounds change every 5 levels, and while many elements repeat themselves, it doesn’t really become repetitive since they’re always arranged in a different way. Happy leaves a green trail of light by default, but he can get a Rainbow Dash, leaving a multicolored trail, or a star item that makes him invincible, that makes him flash in different colors like a casino sign. The characters you can select and enemies have funny reactions and make lots of funny expressions, and there are even magic blocks with faces, ones you can break and others on the background. It’s also worth mentioning that there’s parallax scrolling for a 3D feel, that you can notice better seeing the tubes on the background in level 5.

Happy Dash certainly stands out among the lot of infinite runners available now. It’s graphic style is pretty unique, but gameplay wise the combo system and the way you level up and transition to diferent places is something fresh, and being random generated you’ll get a different experience everytime you play, so it certainly does have replay value. 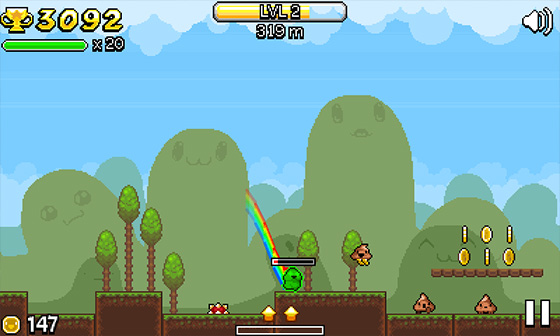 The game gets pretty challenging, and it is not easy at all to get to level 10, and since stage elements get re-arranged everytime, you need to react as you go, so here you don’t have the “memorize the level” or “practice” factor of old console platformers. While it has many things going for it, when you lose you have to go back, and while stuff changes a little, it still feels like the same thing, and after failing to get to level 10 or 15 a few times, you end up not feeling like going for another playthrough. Maybe a Mission System where you need to land on 10 enemies or dash 100 meters or break 100 blocks like in Pac-Man Dash would have been better and more entertaining for most players.

Happy Dash is free in Google Play and the Apple App Store, and as usual you’ll see some advertising and there are in-app purshases so you can get coins and upgrade faster, since it’ll take dozens of hours to unlock all abilities and upgrade to the max by just playing, but it isn’t necesary to spend a dime to enjoy the game to the fullest.

Happy Dash is a good endless platformer. Its visual style is quite different from other similar games, and the combo system and other tweaks to the basic runner gameplay most titles in the genre have are enough to make it stand out and it’s a good option if you’re looking for a new pixelated sidescroller. Pros Cons