Rapstronaut: Space Journey by Touchten is a jetpack sidescroller adventure game where you fly over various beautiful stages & environment from Mother Earth, Atmosphere, Space Station, to the the Moon, while collecting gems to power up and avoiding pink cloud obtacles and cute enemy helicopters.

Rapstronaut has you in the role of RAP equipped with a jetpack cruising the air. Just touch the screen to activate the jet propulsion and go up, and release your finger to go down. Tap in intervals to keep afloat at about the same height and change your altitude depeding on what you need to avoid enemies and obstacles. 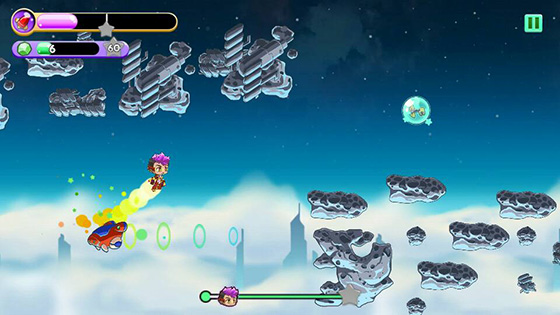 The overall objective of the game is to collect green gems, items and relics, and get to the end of the stage without dying. At first you’ll see some purple clouds and helicopter enemies. Later on you’ll find some blades spinning around with rockets on the tip, and huge ships coming towards you that look strangely similar to the Bullet Bills in Super Mario Bros. If you hit an enemy or obstacle, you lose a chunk of your health bar, and once you deplete it all, you lose the level. You may continue by exchanging collected gems, or watching a video; but you can only do that once, if you die a second time, you’ll have to start over. You get a Star Rank depending on the number of gems you collected and your the amount of health you have when you cross the line at the end of the level. In the top left corner of the screen, you can see how many gems you have to collect to get that star, and right in the middle of the health bar there’s another star. So if you get enough gems and finish with over half your health bar filled, you gain 3 stars. If you don’t, you can select the same level again in the world map. In the game menu, you can trade your collected gems for power ups, like More Hit Points, more resistant armor, or an ability that makes the gems collected when you finish a level worth double. There’s a yellow, more difficult to get gem in the levels, so go for it. There are also rewards you get by collecting items and special rare “relics” hidden among the levels, so try to get them. You can get rewards like 500 gems for collecting 10 relics, so keep an eye for the floating treasure chests while you play. 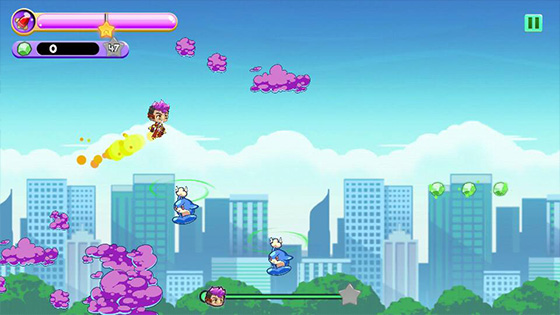 The story is told by cutscenes using pictures, where you can appreciate more detailed design and great use of color. THe backgrounds look OK, but seem to repeat the same elements a lot, and it takes several levels to chance the overall scenery, from an Earth City, to the Space, and another planet. There are some special effects that make the overall visual experience more enjoyable to look at. Like the way gems sparkle, letting go many little shining stars, or the smoke trail left by the enemies when they move. You also get to see explosions when you crash on to obstacles, and the fire of your jetpack changes from a strong red color to yellow and then fades, leaving a smoke trail behinds, adding more animation to RAP, who actually moves around a lot between levels, and not so much while playing.

Rapstronaut is a casual game with simple touch gameplay. Touch to fly up, release to go down, and nothing else. It has pretty visuals and nice music, so you may feel like playing some levels, but the lack of actions you can perform, makes it get too repetitive before reaching Level 10. 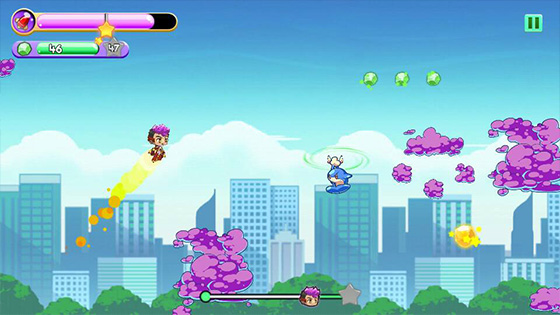 There similar titles that are a little more action oriented, and you can collect power ups, boosters and stuff to do other things besides just dodging obstales, which makes the game more interesting. Games like Jetpack Joyride gives you more character abilities and you can ride different vehicles and change the setting in a very dynamic playthrough, while here in Rapstronaut, the gameplay seems slow, and after a while it gets kinda dull. There are achievements to unlock in order to get rewards, but while some of them requiere real ability, like collecting 100 gems in one level, others actually need you to lose, like Reviving Twice in the same stage, or crashing into 50 obstacles… It’s a good feature that you can level up and collect gems by achievements, but since the simple go up and down gameplay doesn’t have enough variety, you may want to leave it after just a few minutes.

Rapstronaut is free on Google Play and the Apple App Store. When you lose a level, you may see banner advertising, and to revive you can choose to watch a 30 seconds video ad. When you lose all lives, you can gain more by watching ad videos, but sometimes there aren’t any available, so you’ll have to wait until you can continue with the missions. There are suits you can buy for RAP worth 99 cents, and they give you extra abilities like gain 25% extra gems, more another 3 life slots, or being able to recharge lives quicker. There’s also another soundtrack. If may have been better to offer a package with all 4 costumes for 2 or 3 dollars, but as it is, it’s a kinda reasonable price if you really enjoy the game.

Rapstronaut is a fun simple casual game to pass a few minutes, the graphics are nice and colorful and may be of the taste of anime fans and asian animation, but overall, the gameplay gets way to repetitive fast, and other titles with a similar jetpack dynamic just offer so much content that this one won’t get your attention for more than 8 levels. Check it out if you’d like to see what’s popular in Indonesia right now and want to try a new app for a couple of minutes. Pros Cons